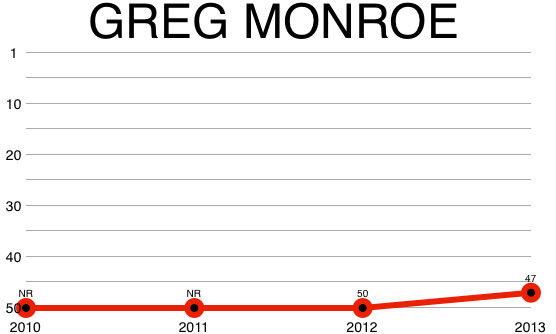 The 23-year-old big man started every game for the Pistons, flourishing into the versatile player reminiscent of his college career. In fact, last season’s production of 16.0 ppg, 9.6 rebounds and 3.5 assists are a mirror image of his sophomore season at Georgetown (16.1 ppg, 9.6 rpg, 3.8 apg), after which he was drafted seventh overall in 2010.

Monroe’s averages of 16 points, 9 rebounds and 3 assists were matched by only two other players in the NBA last season: David Lee and Al Horford—both two-time All-Stars. While Monroe has shown nothing but improvement and a high ceiling during his first three seasons, his team was far less consistent.

After eight straight playoff appearances, including a title in 2004, the Pistons have been on the outside looking in for four straight years. Monroe has had two coaches in his three seasons in Detroit, with the franchise averaging 28 wins during his tenure.

The Pistons look poised to end their playoff drought in ’13-14. With underrated hire Mo Cheeks at the helm, and a revamped starting lineup, Detroit will see how good the sum of their off-season pieces can be.

The Pistons look promising, but change also breeds uncertainty. For Monroe, it will be his role. The fourth-year center’s rookie deal is up for a contract extension. Andre Drummond, the ninth pick in 2012—also a center—is developing as a best-case scenario, dominating Summer League after a productive rookie season. And Josh Smith, the versatile free-agent acquisition, is expected to spend time at the 3-spot in the Pistons’ potent frontcourt. If Smith thrives at the 3, then the frontcourt could be one of the best in the East. But since Smith is most effective while patrolling the paint, his presence could cause a bit of congestion if all three end up starting or sharing a lot of floor time.

The most intriguing aspect of the frontcourt may be the combination of skilled big men and finishers. Last season in Atlanta, Smith and Al Horford formed one of the best frontcourt passing duos, averaging 7.4 combined assists. With Monroe and Smith both willing facilitators, there should be plenty of scoring options for a team that ranked second in paint points last season.

Entering ’13-14, the formerly identity-less offense should start to take shape, even with often-scrutinized Brandon Jennings holding the reins. Jennings has experience playing with quality bigs like Andrew Bogut and Larry Sanders, and has started in the Playoffs twice during his four-year career. A more structured offense with set facilitators is likely to help Monroe, who only tallied 50 percent of his made field goals off assists. In contrast, 61 percent of Brook Lopez’s field goals were assisted, while Dwight Howard reached 69 percent despite an inconsistent lineup last season.

While Monroe averaged 16 points in ’12-13, his efficiency deteriorated beyond the rim. He shot 33 percent from 10-15 feet, and 30 percent from 16-23 feet. He finished the season with a healthy shooting percentage of 49 percent, since the majority of his shots were attempted by the basket. It should be noted his shooting percentage has gone down steadily each year, from a career-best 55 percent his rookie season. Factors such as the amount of double teams commanded by his teammates contributed to how many high-quality looks he saw per game, which has the potential to change this season.

Monroe’s offensive shortcomings were largely unnoticeable on a non-contending team, but his range will be tested once more is expected. If Drummond sees more playing time, Monroe would be wise to work on his mid-range game. With the addition of Smith—widely regarded as one of the NBA’s most emphatic finishers—Monroe’s ability to stretch the floor could pay great dividends to the entire frontcourt.

While Drummond also takes nearly all his shots at the rim, he is only in the second year of his rookie deal. The addition of Smith may be a turning point for Monroe and the Pistons, due to overlapping skill sets and a lack of frontcourt shooters. While Monroe and the rest of the frontcourt definitely have great potential, they also have the potential to expose each other’s weaknesses.

Smith, who has never played with true centers, may be able to fine tune different facets of his game with the freedom that comes from not having to anchor a team defensively 100 percent of the time. What this has to do with Monroe, is that some of the big man’s value lies in what his presence enables his teammates to do.

In Monroe’s short career, the Pistons haven’t put the right combination of pieces on the floor. With a re-tooled roster, he will draw the tough assignment of simultaneously fitting in and standing out. It is an extension year, a low-key position battle, and his first real shot at winning. Monroe is considered a top-50 player in this League. It is up to him how far he will climb.