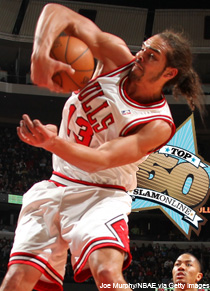 It happens every year. Somebody gets ranked too high, too low, or in some cases, gets omitted altogether, and people freak out. So working under the assumption that

people will have something to say about Joakim being ranked No. 43 in SLAMonline’s Top 50 (because someone almost assuredly will), this is my rebuttal…

But not everyone has a 6-11 version of Troy Polamalu on their favorite NBA team. A player who goes hard on every single play, on every single down, er, possession, and yes, has great hair.

Let’s be real, of the seven players ranked lower than Noah, one hasn’t even gotten his NBA uniform sweaty yet, the other – his teammate – literally isn’t even the face of the franchise anymore, and the other five, my feeling is that their team’s would’ve been OK without them, more or less.

So, no, Joakim isn’t “better” than those aforementioned players, but none were as critical to their team’s success as Noah was to the Chicago Bulls. Not a single one. It’s very simple: When he played, they won. When he was out, they didn’t. No ifs, ands or buts about it.

When the recent talk around Chicago centered on Carmelo Anthony possibly coming to the Windy City via trade, people had the gall to say they’d be willing to part with Joakim in order to make the deal happen. It made me wonder if I was the only one who could see just how valuable he really is.

Look, Melo is a lethal scorer; one of the best in the game without question. But let’s be real, you can find another player who can put the ball in the hole without having to look very far. The League is littered with scorers. Maybe not of Melo’s ilk, but they’re out there.

What you can’t find so easily is a guy who’s basically a 7-footer, who’s all heart, all hustle, and who is without question the leader of his team without even being its best player. Or second best player. Or even its third best player. Name another guy in the NBA who fits that profile?

You can’t. There isn’t one.

Joakim Noah is just that special. His basketball skill set isn’t anything great, eye-popping, or jaw-dropping, but he does a lot of things extremely well which makes him an invaluable member of your team, especially if you want to win basketball games. Not to mention the fact that he’s a natural born leader with a penchant for deflecting attention his way, leaving his teammates the freedom to just play their games.

It’s no wonder other teams want him, but the Bulls would be crazy to get rid of him, especially now with the collection of talent they’ve been able to assemble over the summer.

Consider that in the 64 regular season games he played in last year, his 2.1 assists per game ranked him top 10 among all centers in the NBA. His 11 rebounds per game placed him third. He was top 10 in double-doubles with 28, and in the Playoffs, fughedaboutit. His numbers were even more ridiculous.

Truth be told, had he not come back from injury when he did, the Bulls wouldn’t have even made it to the postseason.

Even though he played in only five contests, he still wound up leading all centers with 13 rebounds per game in the Playoffs. He was tied for first with Tim Duncan by dishing 2.6 assists per game. He led ALL centers in steals with 1.8 per game, and was seventh in blocks with 1.4 per game.

He also had three double doubles, which was good for fifth, he shot .947 from the free-throw line, and there is no statistic to measure how much heart he showed as he continued to fight through plantar fasciitis (yes, his foot was still bothering him) while setting the internets on fire as he dissed the capitol of Cuyahoga County.

The only time a player has been booed louder in Cleveland was when LeBron James showed up at Quicken Loans Arena wearing a Miami Heat uniform.

Wait…that hasn’t even happened yet. But you get the point.

So just in case you want to go there, it’s really hard to argue where Joakim’s been placed on this list.

And if there is one thing that anyone could possibly have a gripe with him about, it’s that he recently turned down a five-year contract extension worth somewhere in the neighborhood of $60-65 million because he feels he’s worth more and reportedly wants to make $70-75 million.

Ridiculous? Well, that depends on who you ask.

Unrealistic? Maybe, but you’ve got to think big, right?

People have doubted Joakim Noah his entire basketball career. But maybe, just maybe, he knows something about his value and his place among the best players in basketball that you don’t.

Let that one marinate for a minute.