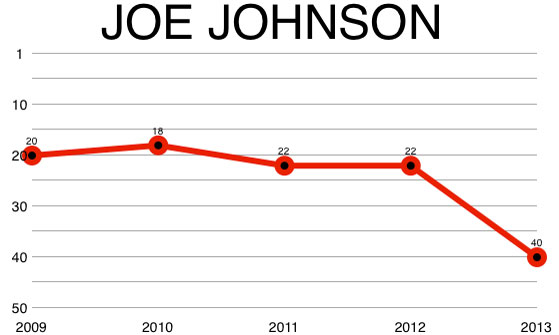 It’s Game 4 of the 2013 conference quarterfinals. Brooklyn at Chicago. The Bulls lead the series, 2-1, and are up 119-117 with 23 seconds left in overtime. Brooklyn loses, their backs are against the wall, down 3-1. Brooklyn wins? The series is tied 2-2 going back to Brooklyn. If this game isn’t a must win, it’s about as close as you’ll get.

Deron Williams has had a nice game so far, as had Brook Lopez. But Joe Johnson? He’s struggled. Being hounded by Luol Deng and Jimmy Butler for most of the game, Johnson only has 13 points on 5-11 shooting. Not a horrible game, but not a game that one of the 50 best players in the NBA is supposed to have.

On this play, the ball goes to Johnson. He’s given the ball on the wing, isolated against Deng, and needs to score or else this game’s over. Johnson puts the ball on the ground, dribbles for eight seconds seconds, and makes his move. Johnson puts his shoulder down, drives to the rim, and puts up a shot while quadruple-teamed. Deng, Nate Robinson, Taj Gibson and Joakim Noah are all in the vicinity, trying to alter Johnson’s shot. The veteran Johnson releases his at the apex of his jump, and gets it up over all four Bulls defenders.

Chicago gets the ball back, and Robinson throws up a circus shot that magically goes in, one of those shots that only Robinson can make when he’s completely in the zone (he ended the game with 34 points off the bench). Chicago leads, 121-119. Brooklyn gets the ball back with two seconds left, right in front of Chicago’s bench.

This time, it’s Butler’s job to guard Johnson, who is camped out in the corner on the opposite side of the court. Lopez sets a screen on Butler, which frees up Johnson, who sprints to the top of the key to receive the inbounds pass from Gerald Wallace. Johnson is wide open, but Butler can’t catch up, and Johnson has a clear path to the hoop.

Johnson takes one dribble, gathers, and prepares to go up again from nearly the same spot. Noah comes from the corner where he was guarding Lopez to contest the shot, and as Johnson unleashes his floater, Noah goes up to block the shot. Noah just misses blocking the floater, which goes right over his outstretched fingers. Johnson lands and looks up at his shot.

This game is an example of why Johnson is one of our 50 best players in the NBA: He may have lost a step, and he may not be the kind of guy you can build a team around, but when your team needs two points, Johnson is an assassin. His lack of emotion is a subject of criticism from fans and pundits, but among guys in the League who are able to take everything in stride and not let the pressure of the moment get to them, there aren’t many of Johnson’s caliber.

Of course, expecting Johnson to the offensive savant that he was in Atlanta is a bit unfair. He just isn’t the kind of guy that can give you 25 points and be the No. 1 option on your team anymore. This isn’t his fault, he’s just getting older. While he may have deserved his massive contract when he signed it in the summer of 2010, it’s hard to justify giving a guy who is usually a team’s second or third option the remaining three years and $70 million on the deal, especially a guy who isn’t able to compensate with excellent passing, rebounding, or defense.

This year, there will be games where Johnson is the No. 1 option for Brooklyn, but there are also games where he will be the team’s No. 4 or No. 5 option. Bringing in Paul Pierce and Kevin Garnett will help the team, but more often than not, they will probably cause Johnson’s numbers to suffer. And yes, it’s hard to justify naming a team’s fourth or fifth best player one of the 50 best players in the NBA unless we’re talking about an Olympic team.

But in Johnson’s case, he’s earned his spot, and until someone takes it from him, he’s keeping it. He’s still one of the most feared scorers in the game when he’s on. He’s still too big for most 2-guards, and when he gets into his zone, the list of small forwards who can stop him is very, very short.

Moments of genius like his performance in Game 4 against Chicago are what make Johnson special. His offensive game is as well rounded as anyone else’s in the League: He can put the ball on the floor and get to the rim, pull up from three, beat you mid-range, anything. He isn’t as efficient as before—last season, Johnson posted his lowest field-goal percentage since ‘02-03—but like the Chicago game or when he outscored Kevin Durant and Russell Westbrook in OKC last year show what he can still do.

Johnson isn’t an All-Star any more, and he isn’t the kind of guy you can build a team around. But with his offensive game, he’s still one of the best 50 players in the NBA.