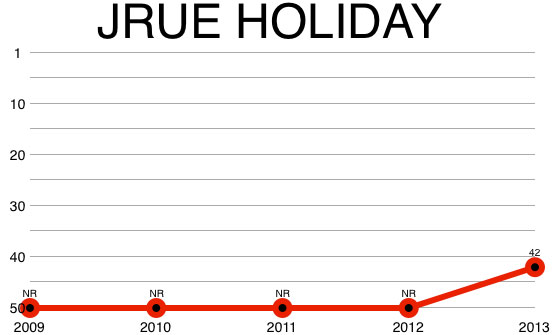 When the Philadelphia 76ers tip off their season on October 30, Michael Carter-Williams—a lanky, 6-6 rookie whom the Sixers invested a lottery pick in and hope is their point guard of the future—will have exactly zero NBA minutes under his belt. He will be 22 years old.

When the New Orleans Pelicans tip off their season on October 30, Jrue Holiday—a 6-4 PG whom the Pelicans hope will be a vital piece of what, on paper, is a juggernaut backcourt—will be 23 years old, with four NBA seasons and an All-Star selection under his belt. He’ll be flirting with his NBA prime, and trying to solidify his standing within the League’s saturated crop of elite young point guards.

The previous two paragraphs are in no way meant to be a comparison between Carter-Williams and Holiday, and are not a shot at MCW or Sixers management. I get it—sacrificing Holiday in exchange for a core group of Nerlens Noel, Carter-Williams, a top-5 and a top-15 pick in next year’s Draft is, in many ways, worth it. General manager Sam Hinkie saw an opportunity to invest in low-cost (at least salary wise), high-upside rookies, and depending on how the players develop, he saw an opportunity to build something special in the not-so-distant future. Philly has a chance to build its program from the ground up, and they can do it without Holiday.

I get that. I also get that Carter-Williams and Noel had tremendous success as AAU teammates in high school, and they now have a chance to strengthen their chemistry and grow together. By the time the Sixers hope to be relevant again, so goes the logic, Holiday will be at a point in his career when he’ll command too much money and/or wouldn’t fit with the inexperienced and learning-on-the-fly Sixers. He’s already been there, done that.

I understand where the Sixers were coming from when they traded their team’s so-called point guard of the future, but I also get what Holiday brings to the table, and that must be fully acknowledged—a 6-4, 205-pound PG with an excellent dribble-drive game, the ability to fill up a box score, developing leadership skills and, if he can develop a consistent jumpshot, a chance to average 15, 10 and 6, and be a multiple-time All-Star. In other words, it’s not like Holiday is damaged goods; in fact, he has a legitimate chance to be a special player.

There’s a reason Holiday is making his first appearance on the SLAM Top 50 at this time. He’s entering the prime of his career, coming off a season in which he averaged 17.7 points, 8 assists and 4 rebounds per game. Among point guards, Holiday was sixth in scoring, fourth in rebounds and fourth in assists, and was the only PG in the NBA to rank in the top-six in all three categories. Holiday assisted on 35.8 percent of his teammates’ field goals, ranking sixth in the League (minimum 70 games). Continuing on his incremental improvement, you could say Holiday “broke out” last season, with career-highs in points, assists and rebounds, and earned a trip to the All-Star game along to the way.

With a core group of Holiday, Tyreke Evans, Eric Gordon and Anthony Davis, the Pelicans are positioned to take a major step forward next season, with the potential to make real noise in the Playoffs. But in order to realize potential—in this case on an individual level—Holiday must turn weakness into strength, not make repeat mistakes, and continue to add dimensions to his game.

Holiday is a hard worker, by all accounts and a good teammate, and a solid competitor. In order to take the next step, though, in my opinion, he must improve two areas of his game: efficiency and shooting.

Firstly, ball security: Holiday averaged a career-high 3.7 turnovers last season. Elite players often have a high turnover rate due to the sheer amount of time the ball is in their hands, but still, that doesn’t absolve Holiday from needing to protect the ball—cutting down turnovers will pay dividends.

This clip, along with a woeful .82 points per possession (ranking in the 28th percentile among all players, per Synergy Sports), contributed to a 16.74 Player Efficiency Rating, which is slightly above the league average of 15 and ranked 94th in the League. That’s three spots better than Will Bynum, and not near the level Holiday should be at. He needs to get his PER up to a Kyrie (21.5)/Steph (21.34)/Wall (20.91) level.

To accomplish this, he must cut down on turnovers, but he needs to improve his shooting as well. Last year, Holiday’s shot selection was as follows:

That’s a fairly balanced inside-out approach. Problem is, Holiday shot only 38 percent on his jumpshots, of which 60 percent of his shots came from. If he’s going to use over half of his attempts on jumpshots, he has to convert at a higher clip. Both on film and on paper, Holiday can break his man down off the dribble and get into the paint. But adding a jumpshot would put pressure on the defense, and not allow the opposition to play off him.

Holiday also posted a below-average 1.11 points per possession on baskets in the paint (aka driving the lane), ranking in the 48th percentile of all players. For an All-Star level PG whose game is predicated on dribble-drive penetration, that’s not efficient enough. That being said, I think his struggles finishing in the paint have more to do with the lack of respect he garners on his jumpshot rather than an inability to put the ball in the hole.

So, yeah, Holiday has work to do on his game. But for someone who is only 23-years-old, the talent—along with the 17/8/4—are apparent.

The former No. 2 recruit in his high school class, Holiday is a dynamic playmaker with a wide-ranging impact. And four years into his professional career, he is an All-Star. Jrue may not be on your list of top-8 point guards right now, but in a year from now, I wouldn’t be surprised if he is.