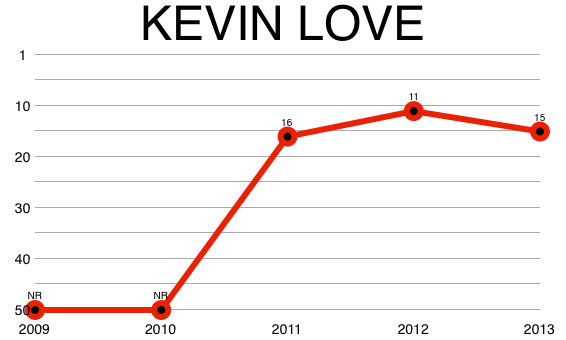 I don’t know how you call this one.

For four seasons, Kevin Love was better than most people thought he would be. Than he could be, if we’re being honest. A solid rookie season, 11 and 9 in limited minutes, this after a prominent Minneapolis columnist—speaking for a lot of people, if we’re being honest—said he wouldn’t be able to get his shot off against NBA bigs. Whatever you thought he’d be in Year One, most likely, he was better.

Year Three: Grown-up minutes, finally, and the numbers to match, better than 20 and 15. Did you think he’d be this good ever, let alone at 22?

Four seasons, tangible improvement in each. And of course that’s the thing about being that dude who “gets better every year”—either you eventually hit a ceiling, or you have a pretty short career.

Kevin Love will most likely play for a long time. Which means it’s the former. The only question now is whether he has already reached that ceiling. Because what we saw last season…that wasn’t the ceiling. That was taking the stairs from the penthouse and tripping on the way down.

Year Five: 18 games squeezed between injuries, 18 games he maybe shouldn’t have played in the first place, 18 games of subpar production—I mean, 18 and 14, but still—in which he never looked right physically, and if I can make an unfounded assumption, maybe wasn’t all the way there mentally, either.

Point being, Kevin Love entered each of his first four NBA seasons optimistic of surpassing outside expectations—and then did just that. Last season, coming off Olympic duty and then breaking his hand, I think he probably knew better.

And this year? Right now? I don’t know how you call it.

This ranking, obviously, take it for what it’s worth. I think Kevin Love is absolutely a top-10 player in an ideal situation: If he’s in peak condition, if he can avoid another semi-freakish injury, if these sort-of-new-look Wolves are deep and balanced enough to make an actual playoff run. I think if he’s healthy and playing on a playoff contender, Kevin is that dude—the dude who fully deserved his Olympic team spot, the dude who can hold off Blake and LaMarcus in the race for best young power forward in the game, and maybe best power forward, period.

I think he’ll be there, condition-wise. I hope he’ll be there health-wise. It would be really cool to see the Wolves there as a team.

Now, about that ceiling. What if ’11-12 was the ceiling? What if 26 and 13 was as good as it gets? It might be, and since that’s actually tremendous for a slightly undersized power forward with below-average-for-an-NBA-All-Star athleticism, let’s say that would be just fine. Better than fine. If he can maintain that, if he can keep pushing up against that ceiling for the next five or six seasons, we’ll be talking about this guy as a possible—if not probable—Hall of Famer.

Here’s hoping he stays healthy; just as important, here’s hoping the ongoing Minnesota Timberwolves construction project makes serious progress this season, because I think playing for a winner will be huge for this dude. I think it matters to him more than it does a lot of guys.

Like I said, I can’t call this one. But I can tell you I’d really like to see Kevin Love with more to play for than stats and a paycheck. If he can, I think we might find he still has some room under that roof.