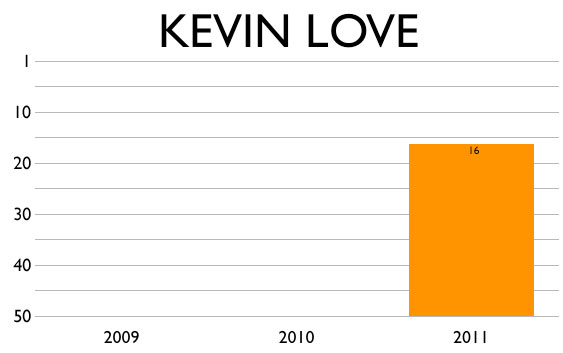 Kevin Love’s personality seems to be universally beloved in NBA circles and his stats (20 & 15) impress like once-discreet Scar-Jo snapshots.

Put simply, Kevin Love is really well-liked by human beings. If you are a human being and you do not like Kevin Love, you’re probably a big jerkface.

Love takes basketball seriously and works tirelessly to get better, but doesn’t take himself all that seriously. So the adulation—his Twitter page bio says “Spread Love”—comes.

There are Jose Cuervo beach volleyball competitions, where the Illsbury Doughboy (as SLAMonline named him) transforms into his alter ego, SPF Pasty.

There are Entourage cameos with elves, erm, actors. (How Scott Caan could call Kevin Love a “UCLA legend” during one of those cameos was kind of head scratching, because Love only stayed in school for a year, but I suppose if you’ve never lost at pin-the-outlet-pass-on-the-donkey, you qualify.)

And there are Right Guard ads, dubbed “Love in the Shower,” where he’s showering in some random couple’s bathroom. Bizarre, but it works because he’s Kevin Love.

And there is this, from yesterday.

All of this and his gaudy, record-setting stats are why he’s listed as the 16th best player in the League on this list. Because he grabs rebounds as if he’s listening to the chorus of Biggie’s “Another”…

I have the quotes right here, from the Knicks broadcast team of Mike Crispino and Walt Clyde Frazier, that show how easy it is to love Love on a night when he makes history. This night launched him into another stratosphere of notoriety.

From a project I was working on last year:

Kevin Love has six points and nine rebounds at the half.

“Would you call that a Love tap?” Crispino asks Frazier when Love keeps a play alive with a rebound.

Love is snaring every rebound in sight. “Previously Love, bounding and astounding, Darko, swooping to the hoop,” Clyde says in his trademark rhyme. Clyde says Love is playing like a “man possessed.”

“Love has been maulin’ and appalin’ ’em,” Clyde says of Love’s eight boards in the quarter. That gives him 17 overall. On Love’s 18th rebound, Clyde says it’s “like the ball is gravitating to him…”

Love misses a shot but grabs the board and gets fouled. “Perpetual motion,” Clyde says. According to the Hall-of-Fame point guard, the man at the helm when the New York Knicks last won a championship, the difference in the game is the “hustle and muscle” of the Timberwolves, “especially Love.”

The fourth quarter begins and Amar’e Stoudemire returns, having battled foul trouble. “Let’s see if he can put some chillin’ on Love’s thrillin’,” Clyde says. Wilson Chandler misses a dunk. Love grabs the rebound. He gets fed underneath and dunks, following a possession that he kept alive with a tip. Clyde employs one of his trademark lyrical devices: “huffing and stuffing.” This renders Love, quite literally, The Big Bad Wolf. Love ties the game on an open baseline jumper and then corrals a franchise-record 27th (!) rebound with over ten minutes remaining in the quarter.

Love misses a straightaway three. “That would’ve brought the house down,” Crispino says, no pun intended to Clyde’s Big Bad Wolf “Huffing and Stuffing” analogy from just a moment ago. When Love finishes a putback in traffic, Clyde says “the guy’s not jumping, he just has exquisite timing.” This is followed by Crispino calling Love ‘Superman’ and Clyde doing his best Judd Appatow film impression with: “we Love you, man!” He calls it, “resounding rebounding.”

“No one has knocked him on his derriere” Crispino says, referencing what the Knicks will see when they study this game on film. Meanwhile, the Wolves have turned a 21-point deficit into a 12-point lead, and Love is the first player to notch 30-30 since Moses Malone in 1982. “Holy Moses!” Clyde says. Love checks out with 31 and 31, having played 40 minutes. He receives a standing ovation. “Bounding and astounding, resounding rebounding, huffing and stuffing,” Clyde says.

“Again, Love is hard to handle” Knicks coach Mike D’Antoni says, before noting that the Knicks missed Ronny Turiaf’s presence. It’s the first 30/30 game of my lifetime. I actually researched when Malone’s 30-30 game took place and that was five months before I was conceived.

There’s that personality we were talking about.

Coming close to properly valuing Kevin Love the basketball player may prove difficult until he finds himself on a halfway decent team. Then the stats and the actual impact of his overall play can blend into a “performance soup” that helps fans and accuracy alike delight in spoonfuls of perspective-laden…whatever, this sentence sucks, you get the point.

In a league with personality and aesthetic borders that some players and reporters don’t cross, Love walks back and forth, easily communicating with all. It’s a skill, a gift maybe. Years of learning the game and the game within the game from his father while also tearing up the AAU circuit has put him in an excellent position to be a basketball ambassador of sorts for years to come. Expect to see him on TNT with Ernie, CWebb and GP in 12-15 years.

So…the co-leader of a 17-win team. An All-Star participant with awesome numbers and some impressive fundamentals, but a player with plenty of room for growth, one that shouldn’t be near his prime.

The list says 16. I say closer to the record-setting digit, 31. We might have to meet somewhere in the middle, where many of the rebounds are.