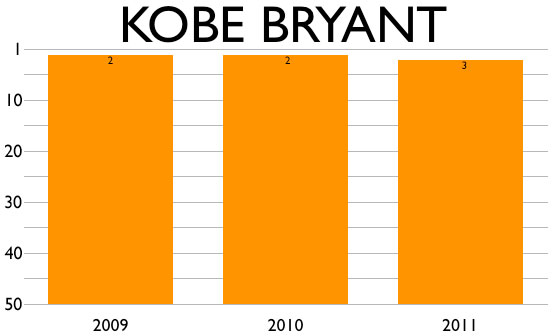 I don’t want to overplay the significance of this, but: nobody wanted Kobe.

This list, which so many of you have received so good naturedly, was submitted last month to the vast pool of SLAMonline freelancers as a first-come, first-served opportunity. The top two (I don’t want to give anything away, but you’ll notice the name “Joey Graham” has been conspicuously absent thus far…) were claimed before the list was sent out, leaving players 3-50.

Kobe Bryant was No. 3. He remains so.

I wasn’t sure I was going to write one of these this year, but as the list was sent out, and then sent out again, I couldn’t help noticing that, while some of my fellow scribblers were apparently clamoring for the chance to weigh in on LaMarcus Aldridge and Al Jefferson, Mr. Bean remained unclaimed.

At first, this shocked me. But then I realized it made a perfect sort of sense.

We’re kind of over Kobe, aren’t we?

I probably should’ve said this sooner, but what you’re reading is not the sort of Bean-bashing I’ve done in the past. (Which, let’s be honest, is a shame. I think we all had a lot of fun back then, didn’t we?) When I say we’re “over” Kobe, I don’t mean we don’t like him (which is irrelevant, even for me, at this point), or that we think he sucks, which, duh. Kobe’s still really good at basketball.

It just seems like maybe Kobe is past the point of being worth arguing about.

OK, so maybe not for all of us. Ha, ha, ha. No. Some of you us will argue about anything, I know. But after a season in which he put up his lowest scoring average in seven years (granted, he was sort of banged up all season), and after a Playoff run that ended in a second-round sweep (granted, to the eventual champs), it seems like our collective analytical energy is directed increasingly toward LeBron (still…) and Kevin and Derrick and Dwyane and Dwight. Sure, we’ll still make our case for where Kobe Bryant, Elder Statesman™, belongs among these younger lads who lack his creaky knees and fistful of rings. But it doesn’t seem to matter, not nearly so much as it did.

There’s a reason for this. A good one. It’s about legacies, and how they become set regardless of whether we’re consciously aware of it at the time.

Kobe Bryant might play one more season, or three, or five (which would make 20—wow), but it doesn’t much matter. However much longer he goes, his career totals will go up and his averages will taper off accordingly, and it won’t really matter. He might win another title or two, which would be impressive without Phil Jackson, but will also almost certainly require the help of a player like Dwight Howard (you know, as a random example), and so that won’t matter, either.

It won’t matter because we all know where Kobe stands.

Better than LeBron? No, not anymore—but yes, certainly, where legacies are concerned. In that, it might never be particularly close.

We can argue the rest—Kobe vs Wade in their prime, Kobe vs Durant, Kobe vs Rose, Kobe vs Barnes or Shabazz or whoever comes next—and we will, because that’s what we do. We can make the case that some nights, during this theoretical ‘11-12 season that may never exist, Kobe Bryant still will be the best basketball player alive. And we’ll be right. Because, some nights, he still will be.

Other nights he’ll show his age, or his impatience, or his belligerence, and those of us you who are so inclined will smile at his eternal, incurable flaws and comfort yourselves with the knowledge that his time is near.

And it doesn’t matter. Because his career, in as much as it matters as a discussion piece for basketball fans, is pretty much over.

But for now—right now, today—a list composed of the opinions of a bunch of well-informed basketball writer/fans says Kobe Bryant is the third-best player in the NBA. (We had him second last year, and second the year before that.) I didn’t vote on this list, but I’m fine with his ranking. I’d probably be fine if we had him fourth, or sixth, or maybe even second. I’m not all that into lists. I don’t think it’s a big deal either way.

Hey, do you guys have any thoughts on this?