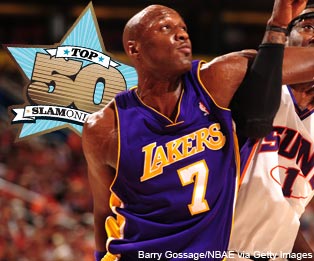 Lamar Odom has been given many labels throughout his 11-season career — upcoming star, versatile, underachiever. At 30 years old, he can add another one. Winner.

In the past 15 months, Odom has won two NBA championships and a World Championships gold medal. This isn’t the path many suspected he would take as little as three years

ago, when he finished his eighth season with the Lakers getting promptly knocked out of the playoffs’ first round in five games. Up to that point, Odom had made the Playoffs three times but had advanced beyond the first round only once. Furthermore, he had been on just one team that finished with a regular season record more than two games over .500.

Then Pau Gasol came along and Odom found his true calling as a basketball player — that of a leader and an emotional center of a championship squad. When Gasol was traded to the Lakers in February 2008, Odom took a backseat in on-court production. Yet his true value to the Lakers rose as he became a bridge between the starters and bench. Derek Fisher’s guidance can’t be underestimated but it’s Odom who offers calmness in the face of a storm. He’s a great communicator.

The characteristics for which Odom is currently revered weren’t always noticed. People expected more from him when he was in his early to mid-20s. His versatility has always been mesmerizing and it was thought that his varied skill-set would vault him into superstardom. There’s nothing physically that Odom can’t do on a basketball court. He embodies the idea of the power forward with point guard skills. In many ways, he resembles former Lakers great Magic Johnson. The court is his playground; there’s no player he can’t match up with.

Unlike Johnson, Odom has never had the capacity to do what others thought he should be capable of. Expectations can cast a cloud over a player’s career. Rather than appreciate Odom for his unselfishness and versatility, his critics chose to point out why he wasn’t the superstar his physical skills said he should be. He was soft, they said. His play was too inconsistent. He didn’t care enough about the game to be great.

After that playoff dismissal in 2007, it seemed as if Odom’s career would fall under the category of good players who never realized their potential. Think Derrick Coleman or, to some extent, Chris Webber. Odom’s calling as a basketball player still wouldn’t arrive during the Lakers’ first of three straight Finals appearances in 2008. If anything, the Lakers’ embarrassing 39-point loss to the Celtics in Game 6 was in some ways a reflection of Odom’s perceived shortfall as a player, as someone who couldn’t rise to the occasion.

It was before the ‘08-09 season that Odom’s career path changed. With a healthy Andrew Bynum back in the starting lineup, Lakers head coach Phil Jackson identified Odom as the one who would have to move to the bench. He was to become a leader for the second string as well as remain a valuable asset for the starters. Despite fighting the demotion at first — after all, he was in his prime — Odom embraced the role that was always waiting for him.

Odom’s easy-going demeanor has been a necessary complement to Derek Fisher’s strong-willed leadership and Kobe Bryant’s legendary competitiveness. His past life experiences, which have included tragic deaths of those closest to him, have taught him that basketball isn’t necessarily life or death. That’s given him the kind of perspective he can impart on his teammates at times when nerves are tested. And he’s still putting up numbers.

Even though his scoring average in ‘09-10 fell for the fourth consecutive season, he’s still averaged double-figure points each season in his career. He’s ripped at least 8.2 rebounds per season for seven straight campaigns. Only his playing time last season — 31.5 minutes per game — kept him from averaging a double-double for a third time. His 10.8 points and 9.8 rebounds per contest showed he can bring it every night. When Team USA needed low-post defense and scoring, LO was there with a double-double in waiting.

It’s turned out that Odom’s perceived greatest weakness has become maybe his greatest strength. No, he won’t dominate a game. But his ability to communicate with teammates, his way of adapting himself to different personalities, has become the glue every championship team needs. The Lakers know it. Now, Team USA has come to find out that Odom’s newfound reputation is that of a winner.