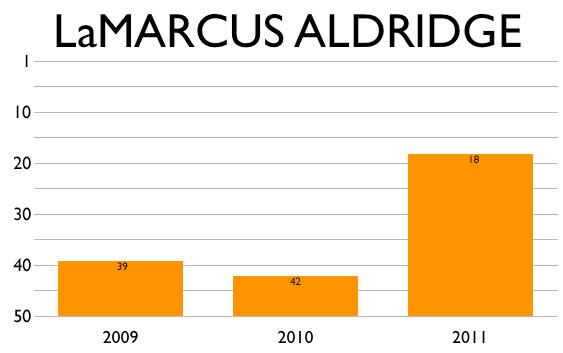 This might be the biggest jump on this year’s Top-50 list. At No. 42 going into last season, LaMarcus Aldridge was a guy with respectable numbers and a ton of potential. The thinking was: He’s only 25, he’s got all this raw talent and he’s a big man—who tend to develop slower.

The Blazers agreed by putting up top dollar for him and Brandon Roy, in the summer of ’09. Locking him up for five years with a generous $65 million deal seemed, at the time, both hopeful and inflated for a guy who, well, could be No. 42 on anyone’s list of the League’s top players.

How easily we could be talking about him in terms of the inflated contracts that are characteristic of this lockout?

Instead, we find him this year at an elite 18-spot. The jump’s due to a deserved spot on last season’s All-NBA Third-Team, earned with career numbers of 22 points and 9 boards.

Beyond the numbers, we have a guy who stepped up into a leadership role with all the right intangibles of a team player. From all accounts, Aldridge works hard in the offseason, and for a young guy with a swollen bank account, he carries himself in a humbled and respectful manner. He’s a student of the game and the kind of guy who feels lucky to be in his position.

He’s playing his ass off too.

Entering into this year’s Playoffs, the LaMarcus-led Blazers seemed to be everyone’s favorite upset pick for a reason.

When he’s on the court he seems to be involved in every play in the vicinity of the basket. With Wesley Matthews, the now-traded Rudy Fernandez and Andre Miller, LaMarcus Aldridge was on the backend of countless ‘oops—a skill indicative of his feel for the spacing of the court and touch around the basket. That’s rare for a guy of his size and athleticism.

This year he became of those guys who had a presence on the court. It’s an element of a game that can’t be computed to a stat, but when you have to be constantly aware of one guy when he’s on the court—devoting double-teams to him, loosing your normal offensive rhythms—that, to me, defines an elite player.

These are the subtle skills that will help him continue to grow into a perennial All-Star. We saw a glimpse of the player he is this year, and at a fresh 26, you can count on some serious production out of the big man for years to come.

He’s doing this all on a team that’s out of the national spotlight. I lived in Portland and have experienced what it’s like in the Rose Garden. Every home game, there’s a Playoff-like atmosphere. Those fans have stuck by that team despite it skipping Kevin Durant in the Draft, and watching Brandon Roy, despite heroic efforts, appearing to be permanently limited by nagging knees. There’s a buzz in that city for all things Blazers that’s unique to only a couple of franchises in all of sports.

For LaMarcus, to be stepping up in that climate—in light of all that the franchise’s has gone through—speaks volumes to his character as a composed, long-term leader in one of the great basketball towns.

They’ve shuffled some pieces and acquired both Raymond Felton and Nolan Smith to come in and run their point position. Both of those guys (obviously the rookie Smith) are unproven but could thrive in that market, which is kind of reminds me of their respective alma maters UNC and Duke. Concentrated, loyal fan bases with patience and knowledge of the game.

Combine their potential with the emergence of Wesley Matthews, the return of Gerald Wallace and Marcus Camby and they’ll, again, be in the conversation in the ’12 Playoffs.

There’s the looming question in Portland of the two fluttering franchise pieces: Greg Oden and Roy. Roy’s fall has got to be one of the worst in professional sports that didn’t involve a wife and a golf club. Roy was our No. 11 player last year. He didn’t make the Top 50 this year.

I’m not sure, Roy’s not sure, if he can contribute to the Blazers in any significant way this year.

LaMarcus Aldridge will. He’s at 18 in the Top 50. This isn’t a coronation. He’s still got to improve, and make his game, and that of the Blazers, more than just a first-round threat.