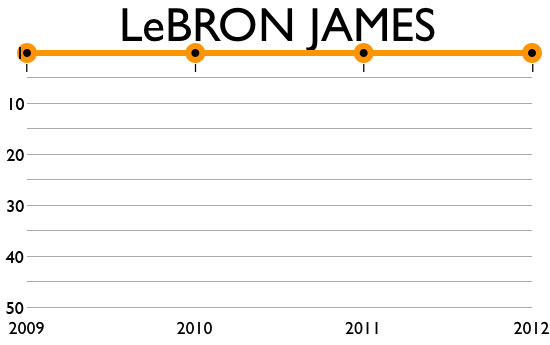 LeBron “liked” to win. When he loved to win more than just about anything, when he couldn’t accept the alternative, then he could think about joining the icons. Until then, he still had goals to reach for.

I wrote those words a long time ago. I wrote them about a lanky, 16-year-old high school sophomore.

I was writing about a player whose coach was already comparing him to Magic Johnson, Tracy McGrady and Kobe Bryant.

Keith Dambrot is in his ninth season as the head coach at the University of Akron, but when I met him back in 2001, he was coming off a second straight Ohio state championship at Akron’s St. Vincent-St. Mary HS. He’d been coaching LeBron for a few years by then, through middle-school workouts and during his first two seasons of high school ball. Hoops-wise, Dambrot knew LeBron as well as anyone.

“Most guys who dominate at his age do it athletically, but LeBron has done it with skills and knowledge,” Dambrot said. This was in the late spring of LeBron’s sophomore year, and we were in the St. V gym, watching LeBron and a mix of high school teammates and local college kids in a ragged, out-of-season pick-up run. “He’s just got great knowledge. He just understands the game. A lot of it’s instinct, but the other thing is, he’s very bright. In order to get better at the game, you’ve gotta be able to learn. The guy is amazing from that perspective.”

One of the things that always struck me about my first meeting with Dambrot was how blunt he was regarding LeBron’s potential. Even as he acknowledged the young player’s weaknesses—an occasional tendency to coast defensively, to not rebound as aggressively as he could—Dambrot refused to shy away from predicting greatness. “He does everything,” the coach said. “He just needs to fine-tune.”

Dambrot spoke to LeBron’s mental toughness, how he each year he’d seen LeBron become a more determined competitor; the coach’s exact words were, “The guy likes to win.” I don’t remember if I picked up on Dambrot’s body language, or if he said something more specific that I failed to write down. All I know is that he never said LeBron loved to win, or that he hated to lose. More than a decade later, I’m left with the vague sense that Dambrot was implying just that.

When he loved to win more than just about anything… then he could think about joining the icons.

Like I said, I wrote that a long time ago.