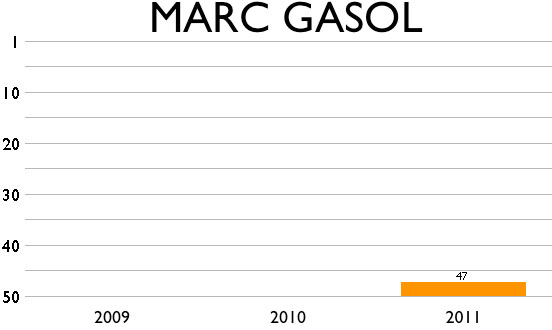 If I were a Memphis Grizzlies fan, I’d be as stressed out at the potential of a basketball-less ‘11-12 season as I’d be at the potential of a Marc Gasol-less ‘11-12 Grizzlies season. As of now—well, as of the lockout’s end—Gasol is a restricted free agent. And you know what happens to 7-1, 26-year-old restricted free agents with increasingly bright futures? They get offered a lot of money to play basketball. And if the team with the option to do so doesn’t match the bid, they accept that money and then they go play basketball for another franchise. Not exactly the end of the world, sure, but sometimes, it sucks to have to let a guy walk. This is one of those times.

Here’s why I’d be nervous: I think the Memphis Grizzlies can be really, really good this year. They finished eighth in the West in ’10-11, and surprised some when they made a push to the second round before the Thunder eliminated them in six. A variety of factors helped along the way: Mike Conley’s evolution into a sneaky-good leader; Shane Battier and Tony Allen’s combination of tactical and reckless perimeter defense; and, of course, Zach Randolph dominance in the low-post.

Z-Bo was the team’s driving force, but without Gasol’s presence on the opposite block, he might not have had such success. Ever try playing post defense against someone much bigger than you, who also has deft hand skills and an overwhelming variety of low-post moves? It’s tough. Like, really fucking tough. You need help. You know what happens when there’s another really skilled big dude on that guy’s squad, only a few feet away, on the other side of the paint or hovering nearby at the free throw line? The help D never comes. Then you get scored on. If the Grizz let Gasol walk, I’m not so sure they can repeat the success they had last April and May. He’s too vital to the operation, as anyone who was watching them on a consistent basis must have noticed. And they can recreate that run. Hell, they could do better.

You know why? Because, with Rudy Gay out with shoulder stuff and the Grizz relying on an almost purely inside-out system, that nonsense I spewed a couple of paragraphs above applied to the group this season more than ever. Without providing too much of a spoiler alert, I can tell you that Randolph will finish higher on this year’s Top 50 than he ever has before. And Z-Bo’s great year had some pretty tangible results—I’m assuming you saw how they performed in the Playoffs—because of Gasol’s presence. So even without a statistical improvement, he was as valuable as ever. Hence this ranking.

None of this is to say that Gasol himself isn’t crazy talented. Memphis was only able to utilize that inside-out system through the postseason precisely because the team had so multiple tall options down low. Often times, the 7-1 Spaniard would get fed the ball within the first few seconds of an offensive possession, and he’d respond by draining a nifty six-or-so-foot turnaround jumper, or some other semi-authoritative low-post maneuver that’d result in a pair of points or a trip to the free throw line. Then, the next time down the court, Z-Bo would be fed the rock, leaving Gasol’s defender the option to double-team at his own risk. Good luck with that.

Despite numbers that may say otherwise, Gasol’s game is steadily improving. He doesn’t spend much time on highlight reels, but he’s a big body that can defend, rebound, pass and shoot all fairly well. Essentially, he’s the perfect second best big man you could ask for. The strange thing is, he puts up relatively commonplace numbers that keep him below the radar, though his style, in today’s game, is far from ordinary. A seven-plus footer, weighing 265 pounds, capable of playing with his back to the basket and banging down low? In 2011, I’m not sure you’d need two hands to count the guys who still boast that style, or at least boast it well.

For all of these reasons and plenty more, this Spanish center is going to get a hell of a payday whenever he’s allowed such an opportunity. If you were a slow-paced team reliant on an inside-out style and already armed with a top-notch power forward to pair him with, is there a better way to spend a few bucks?