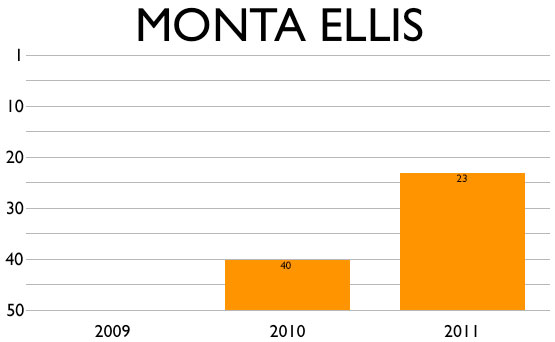 It was a warm, rainy spring day, and Monta Ellis was standing in a West Oakland warehouse that had been converted into a food pantry, addressing a crowd of people waiting to receive cardboard boxes of basic supplies. As usual, he looked completely uncomfortable speaking in front of a group.

He stammered through a few platitudes, shifted around restlessly, then nearly sucked the air out of the room with something about “taking time from my busy schedule.” He just about brought it back a minute or two later when he mentioned, with raw sincerity, that he knows what it’s like to be hungry.

Ellis grew up poor in Jackson, MS, best known as the hometown of Richard Wright. Unlike many top basketball prospects he didn’t end up at a fancy prep school, attending Jackson’s Lanier High—one of many 100-percent black public high schools in a state that still fights federal desegregation laws dating back to Wright’s era. And like many of Wright’s protagonists, Ellis also knows what it’s like to feel uprooted and out of place.

He joined the San Francisco Bay Area’s NBA franchise straight out of Lanier in 2005, just 19 years old. His thick Southern accent was sometimes difficult to understand, and his quiet, often hesitant public demeanor was inimical to the PR rigors of the NBA.

“He’s a very, very shy guy by nature, and it takes him a while to warm up to people,” said former Warriors assistant Calbert Cheaney in an interview last season. Cheaney also played for the team during Ellis’ rookie year. “He’s a country boy from Mississippi. I’m sure he was a little bit star struck at first, coming all the way to California to play in the NBA.”

But one man’s shy is another man’s aloof. Depending who you ask, Ellis is either stubborn, overconfident, and by NBA standards has a questionable work ethic or is confident and very coachable. (The latter according to former Warriors’ head coach Keith Smart.) He is either too self-consumed to talk to people or simply, as Cheaney insists, quiet by nature. He could even be all of the above.

As a 24+ ppg scorer and the team’s workhorse—he has led the NBA in minutes per game each of the past two seasons—there is bound to be praise, but within the Warriors organization, Ellis is both respected and polarizing.

Once, in the locker room after a game late last season, Ellis stood surrounded by cameras and microphones delivering one of his typically funereal post-game pressers. If you stood far enough behind the throng to take in the whole scene, there was another voice, speaking in almost the exact same cadence and tone as Ellis—except the voice was speaking gibberish. It was one of Ellis’ teammates, just out of earshot of the media, mocking his accent.

As painful as he can sometimes be to observe off the court, that is how astonishing he is to watch on it—especially when he’s driving to the basket. Good lord, can he finish at the basket. Monta Ellis can put a basketball through a hoop with all the beauty and cunning and flair of Modigliani finishing a brush stroke.

Ellis is laser quick but unlike most other slashing scorers, he is not a great leaper. His most memorable drives end below the rim. With unadorned passion he feints, fakes, and changes speeds, finding his way into the paint, and when the trees converge on him the 6-3, 185-pound guard somehow twists his slim body around, or freezes the defense just long enough, or simply flings a shot over them in a way nobody could ever anticipate and suddenly the ball is spinning softly, far above the basket, 18,000 people communally holding their breath for that brief, suspenseful pause before it drops through the net, and in the improbability of the moment they all go insane.

And the fans always know how incredible a shot it was because so many of them have done the exact same thing once or twice over the years. On the playground or at the Y, driving to the hoop out of control and hip checked by a defender, thrown completely off balance, tossing up a wild shot and watching it go in just after hitting the ground. People remember that thrill the rest of their lives. Except Ellis scores on shots like that every single time he steps on a court. “That’s just a gift he has,” says Cheaney. “Not a lot of guys have it.”

After his brief speech at the food pantry, Ellis settled in behind a table next to his wife, Juanika, a former police officer in Ellis’ adopted hometown of Memphis, TN, and started handing out boxes. The crowd began to press through the open front of the warehouse and the combined smell of body odor, unwashed hair and clothes, and dog piss, courtesy of two bulldogs who guarded the place—and who relieved themselves on pieces of cardboard left on the floor for that purpose—congealed on the wet, humid day into a rank fog that engulfed everyone.

The young wife of the team’s owner rolled up the sleeves of her white designer blouse to help move boxes; some of the team’s staff slid off to the side; and one germaphobe Warriors official frantically darted around looking for hand sanitizer. Ellis, however, was completely relaxed. This appearance was his idea—after having done a similar event with teammate Stephen Curry a few months earlier, he’d wanted to do one alone.

It’s only natural that Ellis would want to establish an identity away from Curry, to whom he is constantly compared. They’re both rising stars, listed at the exact same height and weight, are nearly the same age and play the same position: shooting guard trapped in a point guard’s body. But after that, they’re a study in contrasts.

Curry, who grew up in a nuclear household as the well-to-do son of an NBA player, is approachable and unselfconscious before a game. He is also meticulous in preparation, with an on-court warm-up that includes rehearsing his moves and cuts with game-level focus.

Ellis, on the other hand, predictably tenses when any reporter approaches, before gravely intoning that he doesn’t do pre-game interviews. His warm-up has been known to feature catapulting circus shots over his head. It makes old-school players and coaches cringe, even though an astounding proportion of them go in.

But Ellis’ genius for the game can’t be learned, even if you’re as diligent and talented as Curry. And while Curry’s outgoing personality leads people to root for him, Ellis, who plays with his heart so raggedly exposed, his talent and limitations always on display, has something more magical: the ability to make people identify with him.

At the food pantry it didn’t take long for Ellis to get tired of sitting behind the table, with boxes and sterile greetings pushed across a 24-inch gulf. But what happened next was still a surprise.

Without warning he got up from his chair, walked around the table and waded into the haggard crowd. Security personnel and team officials could only watch in awe and apprehension while he hugged people, shook hands, posed for pictures and whispered encouragement too low and close for anyone else to hear—far closer than any other outsider was willing to go.

After most of the boxes had been given out Ellis did a brief, obligatory TV interview and then slipped out the door, blowing off the rest of the media. It would have been more surprising if he hadn’t. Like so many nights throughout the season he’d shown us some important part of himself, but didn’t feel like talking about it afterward. Like most nights during the season, it was incredibly compelling to witness.