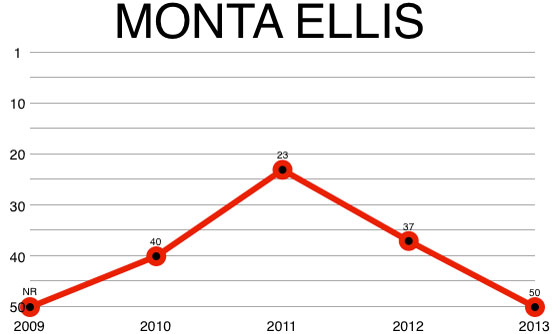 The SLAMonline Top 50 is back! With players returning to work this week, there’s no better time to start the definitive ranking of the NBA’s best players. Come through seven days a week as we shine the spotlight directly on the NBA’s brightest stars.—Ed.

Monta Ellis is an enigma. At times he seems like one of the most versatile and talented shooting guards in the League. Other times, Ellis doesn’t have it all.

Last year, the shoot-first and shoot-second shooting guard had one of the worst seasons, if not the worst, of his eight-year career. Even though Ellis averaged 19.2 points, 6.0 assists and 2.1 steals with the Bucks, his percentages irrefutably became the glaring point of discussion.

Ellis shot 41.6 percent from the field and 28.7 percent from the arc. Out of 148 guards in the League last season, 117 had a better true shooting percentage than Ellis did. He was dreadful shooting off the dribble (32.3 percent), ranking dead last among these guards. He got into some bad shooting habits early in the season and never stopped chucking it up.

And on the other side of the court, Ellis continued to be a burden on defense. When Ellis was on the bench, the Bucks’ defense was two points better per 100 possessions. He may have grabbed a lot of steals, but this was in large part due to his reckless tendency to jump in the passing lanes, putting him out of position.

Along with these defensive issues, most NBA gurus have a preconceived notion that Ellis’ inefficient style is simply the way he is and that he can’t be changed at this point in his career. Yet, the 6-3 gunner should still be considered moldable.

Coming straight out of high school in 2005, the veteran is only 27 years old. He has plenty left in the tank and has only missed 10 games the past three seasons, including none last year. With no lingering injuries, Ellis should be considered to be right in the middle of his prime.

In six of the last seven seasons, he has averaged at least 19 points. But the major concern is his shooting percentage, right? When comparing Ellis and his career shooting percentage (45.6) to that of Kobe Bryant, James Harden, Joe Johnson, Dwyane Wade, Klay Thompson, Kevin Martin, JR Smith, Manu Ginobili and Jamal Crawford, Wade is the only one who has a better career field-goal percentage (48.9) than Ellis. So even with his dreadful season last year, Ellis ranks better, percentage-wise, than these top shooting guards. This proves that there was in fact a time when he knew how to utilize his offensive weapons.

Ellis told the Dallas media he hopes to get back to how he played during the ’09-10 season, when he averaged a career-high 25.5 points with the Warriors. That season was also the fourth year of a five-year span when he shot 47.1 percent from the field.

So as Ellis starts anew with the Mavs, the question is: Can he revitalize his career and look like his former self or is the Ellis we saw in Milwaukee now the norm?

When looking at Ellis’ two years with the Bucks, it quickly becomes evident this pairing never should have happened. If his time in Golden State proved that he couldn’t play with Stephen Curry, why did Milwaukee ever think he could work with Brandon Jennings? There are many things Ellis struggles to do on the court, but he certainly doesn’t struggle to get points in bunches. If he is starting next to a shoot-first point guard, that consequently diminishes Ellis’ strengths. Putting him beside Jennings on an offensively deficient Bucks squad was a death wish from the very start. This is why it is hard to believe Ellis’ unproductive play with the Bucks wasn’t impacted by the context of his situation.

(If there is any positive to take away from Ellis’ play last season, he did shoot 35.1 percent from three-point range after the All-Star break.)

Ellis will now start next to Jose Calderon, a guard who epitomizes what it means to be a pass-first point guard. Over the past seven NBA seasons, no player has a better overall assist-to-turnover ratio than Calderon (4.27). Chris Paul is second with a 4.17 ratio. Calderon will quickly become acclimated to Carlisle’s system and learn the spots Ellis (and Dirk) wants the ball. Oh, and he’ll actually get him the ball in those spots.

Calderon will play a major role in trying to restore Ellis’ heydays; however, one of Ellis’ other starting teammates will have an even greater impact. Especially once gameday comes around.

During Nowitzki’s 15 years in Dallas, many trigger-happy guards have come to town, found defined roles and improved their shooting percentages. Nick Van Exel, Jason Terry and even OJ Mayo all shot well during their times in Dallas. Why? Due to his awkward one-legged fadeaways, habitual pump fakes and ability to shoot from anywhere on the floor, Dirk draws the majority of the opposing defense’s attention, no matter who else is on the floor. Ellis will have the opportunity to take advantage and use his speed to become what JJ Barea once was during the Mavs championship run and what Darren Collison attempted to be. It’s up to Ellis.

But that’s the hardest part—it’s up to Ellis. No matter how many statistics are broken down, the likelihood of Ellis having success in the ’13-14 season relies on his attitude. Will he change it? Does he even want to?

If Ellis legitimately wants to alter the way people view him as a player, the man who once irrationally compared himself to Dwyane Wade must rediscover himself and find purpose in being a No. 2 scorer for Rick Carlisle. His new head coach won’t put up with any antics that could hinder the team’s success.

If Ellis can find a way to buy into what Carlisle is selling and realize the past successes of shoot-happy guards in Mavs uniforms, he has the natural athleticism and offensive skill set to be a part of one of the deadliest duos in the League.

Monta Ellis is an enigma. He can change that by defining himself as a Dallas Maverick.