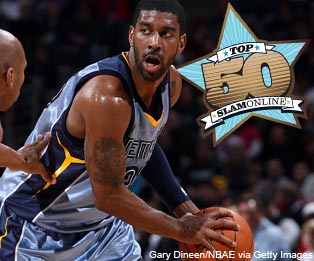 OJ Mayo. Basketball fans/purists either love him or hate him. There’s no in between. Once hailed as LeBron James 2.0, Mayo’s star lost much of its luster during a less than stellar frosh campaign at USC. After his one and done in SoCal, Mayo was billed as overhyped, overrated and erratic l

eading up to the 2008 NBA Draft. As a result, the bball prodigy born Ovinton J’Anthony Mayo fell to No. 3 because the questions about his potential in the L mounted more suspense than Alex Trebek’s Final Jeopardy! round.

But here’s the thing: the former No. 1 high school player in the nation, in the old tradition of “put up or shut up,” put up formidable stats as a rook and avoided the dreaded sophomore slump with an equally efficient year two, which, not surprisingly, made most of his detractors, well, shut the eff up. And while the 6-4, 210-pound combo guard is not the second coming of LeBron or D. Wade or Brandon Roy, he’s no Adam Morrison either. In fact, Mayo has quietly put together a very impressive resume in his short tenure in the League (He is one of only 13 players since 2000 to average 18 points over their first two years in the League). Yet, in an ironic turn of events, the kid who was first mentioned in Sports Illustrated when he was in the seventh grade, considered to be a lock as a lottery pick by the time he entered high school and once bumped his gums to the G.O.A.T. himself, Michael Jordan, during a pickup game at Jordan’s camp is doing the things everyone thought he could do, but this time, no one is paying attention outside of the 901 area code.

Who got the props? Not OJ Mayo. Should he get more love? Let’s do the math:

In his first year, Mayo averaged 18.5 ppg, 3.8 rpg, 3.2 apg and 1.1 thefts per. Last year, he averaged 17.5 ppg, 3.8 boards, 3.1 dimes and 1.2 steals. Mayo’s scoring average dipped by one point, but his field goal percentage jumped from 43.8 to 45.8. His shot from behind the arc remained steady, going from 38.4 to 38.3 percent. The former Trojan also scored 20-plus points 31 times last season with a season-high 40 points against Denver. One glaring weakness is his inability or outright refusal to take it to the rack. Mayo only attempted 3.4 and 3.2 free throws per contest in ‘09 and ‘10, respectively and his accuracy from the charity stripe dipped from 87.9 percent to 80.9 percent. If he wants to open up opportunities for his teammates and raise his game to another level, he has to stop settling for the J and venture into the lane and draw some contact. His numbers need to increase to 5 freebie attempts per and 90 percent from the line or he gets a D-. The key number when evaluating Mayo, though, is 82. Mayo played all 82 games in each of his two NBA seasons, a true testament to his durability and his commitment to the game. But the kid out of Huntington, W.Va. didn’t just show up for work, he put in work. With a shot that’s ice-water from the wing, Mayo had no issue with taking on the League’s best in the backcourt and took it upon himself to monitor his shot selection and let the game come to him, making him a big part of why the Grizz improved from a dismal 24-58 regular season record in ‘08-09 to 40-42 last season.

No one is championing Mayo’s game or competitive spirit to be comparable to the level of Kobe Bryant’s, but we can all safely assume his being cut from Team USA this summer will be more than enough kindling to add to his already burning desire to grow as a player. Then there was that thing with the guy in the place that opened up a big can of NCAA sanctions against USC resulting in Mayo’s name getting Houdini’d from the school record books. All things considered, Mayo is a guy who should have a chip on his shoulder the size of the Rock of Gibraltar. Simply put, Mayo is on a mission from here on out and it would be using Lindsay Lohan-like judgment to bet against his continued climb up the NBA talent ladder because despite all the premature praise the media showered on him as a kid and all of the “look at me” antics in high school, this kid is a legit talent and he’s gunnin’ for that No. 1 spot.