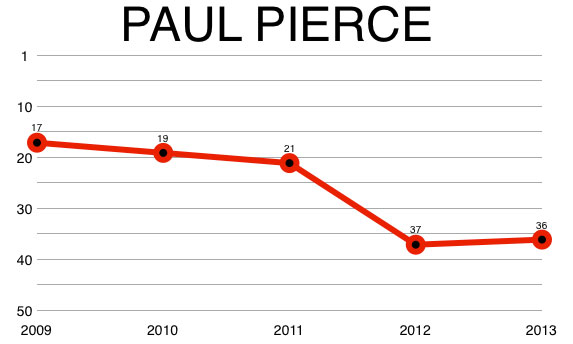 Paul Pierce is an old-ass man. His first SLAM cover was 137 issues ago. He’s so old, he’s been in the League since Kyrie Irving was in the first grade. He’s just one year younger than new Cs coach Brad Stevens.

No two ways about it, No. 34 has been around the block a few times. If this were a list of who can jump the highest, or who has the quickest first step or who could sell the most sneakers, Paul Anthony Pierce would have a tough time cracking the top 50. End of the day though, none of that matters.

So yes, the truth is, at age 35 he’s lost a step. But the Truth is still the Truth. Heading into the ’13-14 season with a fresh start, Pierce is prime to show he’s still one of the best small forwards in the game.

Pierce brings one of the most well-rounded games in the League to the table with a resume that includes 10 All-Star appearances, four All-NBA selections and a Finals MVP. He leaves Boston as the Celtics’ second all-time leading scorer, and top 10 in minutes played, assists and rebounds.

For a more immediate perspective, just look at what he did last season. Pierce carried an injury depleted Celtics team on his back. With Rajon Rondo out, he took on the load as the primary ball handler and offensive generator for Boston. As both facilitator and scorer he filled the box score with 18.6 points, 6.3 rebounds and 4.8 assists per game. As Rob Mahoney of SI pointed out, those are all-around numbers that were only matched by LeBron and KD.

Entering his 16th season, it’s reasonable to wonder just how long can Pierce keep this up. For Pierce’s game, his age is less of a concern because his exploits aren’t from sheer athleticism but rather the result of guile, veteran savvy and great footwork. At this point we’ve all seen it over and over. Pierce can rock defenders to sleep, get them off balance, and get his points. Even when the whole arena seemingly knows where he’s going, Pierce can still get to his favorite spot on the elbow for a step-back jumper. He’s got a game that ages well, and should be able to thrive on a well balanced Nets team.

After spending damn near half his life in Boston, Pierce has turned in the storied Celtic Green, for the oh-so-contemporary black and white of the Brooklyn Nets. On the deepest roster he’s ever been a part of, Pierce won’t have to shoulder the whole offensive load. Relieved of having to be the man, he’s arguably more dangerous because he can pick his spots and should have fresher legs for a deep playoff run.

Pierce has proven he can thrive playing alongside other stars, and as the team takes shape, he has the type of game that can mesh well with others. Need someone to hit a corner three and play stout defense? Pierce can do that. Need someone who can initiate the offense? Pierce’s got you there too. Take a big shot? Pierce’s more than happy to oblige. At this point, with this being his last best chance, Pierce will likely do anything to get another shot at the O’Brien trophy.

“Right now, I see ourselves ready to win another Championship,” Pierce recently said in an interview with Nets Daily. “I’m more hungry than I’ve ever been knowing this may be my last couple of years in the League. I want to make the most of it.”

So far, Pierce is making the most out of being in New York. While the white hot spotlight of New York has taken down many, Pierce is relishing it and stoking the flames of a rivalry with the Knicks. While the back and forth with JR Smith is entertaining summertime fodder, it does begin to set a tone. For a team whose listlessness was exposed by Chicago in the Playoffs, Pierce’s boasts and assertions fill a vacuum. It establishes an attitude that’s more meaningful than the arena blasting Brooklyn-centric hip-hop. Pierce ups the ante and brings relevance and accountability to the table.

“I think it was just vanilla and I think you guys can see after the trade with Garnett and Pierce that it’s kind of changed,” Kidd said recently to the New York Daily News. “So I think we’re doing the right thing with changing the identity. It was just there was no flavor, and no identity. So with that trade, that changes the whole game.”

Without playing a game, Pierce has already has filled a leadership and attitude void for Brooklyn and has helped set the stage for the final act of his Hall of Fame career. Fully motivated and with all the backup he could ever need, Pierce is in a position to show he still has a game to be reckoned with.