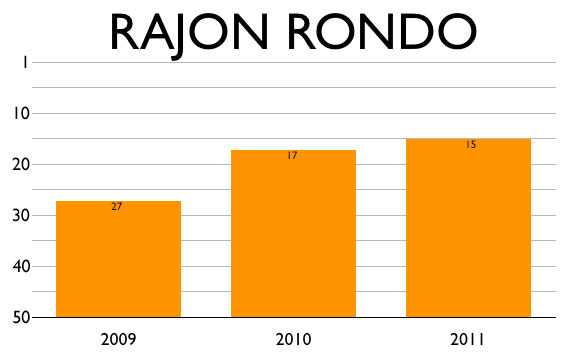 The slights are always one of the following:

1. He’s playing with three Hall of Famers. If he wasn’t on the Celtics, he wouldn’t be anything.
2. He can’t shoot.

To the first point, sure. It’s no secret that playing with three future HOFs would help a young guard progress in the League. At the same time, for some reason, there’s cats who can’t seem to understand the challenge that comes with that, as well.

He’s got to keep everyone happy, from Paul to KG to Ray to Doc, and he does. He runs the show. Those aforementioned Celts are greats in their own rights, but at this stage in their careers, they can’t do things singlehandedly. They need someone to get them the ball. Rondo does so without failure.

Those wary of his value, should quickly reference the second round of last year’s Playoffs, when the Cs met up with the Heat. Rondo, despite dislocating his elbow in Game 3, returned in that same game to help lead his squad. This, in and of itself, is admirable enough. But, in overtime of Game 4, he was unable to go. The effects were obvious.

With a score knotted at 86-86 when the period started, the Celtics scored just four points, shot 1-6 and committed four turnovers, losing the pivotal game 98-90.

All those hall of famers, and the Celtics, arguably the best executing in the League, looked lost. The answer requires little deliberation.

During Rondo’s his five years in Boston, Garnett, Pierce and others have missed countless games, while the revolving door of role players has swiftly spun. The one constant has been Rondo. Since he became the full time starter in ‘07-08 (when they won the chip), he’s missed 21 games (13 of which were last year.)

Rondo was blessed to be put in a brilliant situation. That’s no fault of his. All he could do is worry about what he could control—and he did. He deserves ample respect for that, which is why SLAMonline has him here at 15 (the highest of any Celtic).

For a PG-lover and student of the game like myself, it’s an absolute beauty to watch him facilitate and distribute. The boy averaged a career high 11.2 assists last year (against 3.4 turnovers), further proving that he is one of the best passers and decision-makers in the L. And he’s one of the fiercest defenders in the League, leading one of the best defenses in the League, harassing ballhandlers on a nightly basis. Accordingly, he clocked a league-leading 2.3 steals last season.

To the second point—that Rondo can’t shoot—well, there’s really no argument I can make for that. He can’t… yet. But neither could Jason Kidd (early in his career) or Gary Payton, and they seem to have made it out OK.

What’s more important, though, is thus far, it hasn’t necessarily mattered. Sure, opponents sag on him, but he’s grown adept at compensating for his inability to shoot from the perimeter by perfecting his ability to score from the interior, using a wide arsenal of floaters, layups and runners.

We can contemplate hypotheticals all day long. At the end of the day, that’s all they are, though. If “if was fifth…”, you know.

What’s real is the fact that Rajon Rondo is one of the League’s premier floor generals, and has a ring and plenty of Ws to prove it. Forget shooting percentages and three-pointers made, and how many HOFers he plays with. Since ’07-08, the Celtics are 234-80, finished first in the Eastern Conference three times, been to the Finals twice, with one ring to show for it. Those are the only numbers that matter.