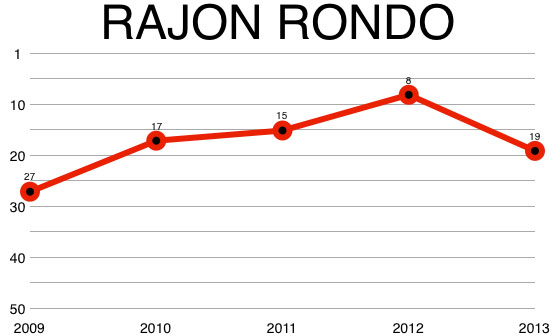 And then there was one.

Things are different now for Rajon Rondo. Way different. Like “holy crap is this team even the Boston Celtics anymore?” different. There’s the trade that gutted the former Champs, shipping away Paul Pierce’s daggerific shots and Kevin Garnett’s intimidating defense and impassioned leadership to the team in Jay Z’s borough.

But hey, that’s no sweat off of Rondo’s back.

“I didn’t feel anything,” Rondo told the Boston Herald. “I actually landed in L.A. the night of the Draft and I got like 45 text messages coming through the phone. I thought I was traded. Paul and Kevin were traded, I actually talked to both of them, text messages, and I talked to them on the phone. It’s part of the business. It’s not the first teammates that I’ve been close to that have been traded away—(Kendrick Perkins)—it’s part of the process.”

Then there’s the defection of Doc Rivers to the Los Angeles Clippers. Yep, you read that right. The Clippers. So the coach who molded and shaped Rondo from a raw lump of Kentucky Wildcat clay took his Xs and Os to Lob City and Rondo will now be led by a baby-faced rookie NBA head coach.

“I give Doc a lot of credit,” Rondo told ESPN. “Doc was a great coach to play for. He was very hard on me, he helped me become the player I am today and I give him a lot of credit. But now he’s gone to L.A., that’s that.”

Oh, and to make things even more interesting, there’s the comeback. Rondo had surgery to repair his partially torn ACL back in February and likely won’t return to the court until December. Sure, he’s “participating” in practices, but that don’t mean diddly until he laces ‘em up when it counts. And even when he does return to action, he’s got a tough road ahead of him if he wants to Adrian Peterson his way back to the point guard everyone loves to watch in action.

So when you total all that up and look at the pieces that will be around him this upcoming season, it’s pretty easy to figure out why this strong-willed point guard slips from his sweet No. 8 perch on last year’s list to his less-than-stellar No. 19 spot this year.

Before he went down on January 25 against the Atlanta Hawks, Rondo had elevated his field-goal percentage from 44 to 48 percent and racked up a League-leading 5 triple-dubs. What doesn’t look good on his resume, though, is the fact that Beantown had a better winning percentage (21-17) for the second half of the season without their fearless leader on the floor. Rondo racks up assists like it’s a bodily function, but he has to make sure he’s also making his team better and creating more shots for his teammates. With a band of journeymen suiting up alongside him this year, all eyes will be on his ability to “elevate” the play of his teammates.

Now that defenses will be more focused on him, he’s going to have to develop a more reliable jump shot from mid-range and the three-point line. And for the love of God, he has to sink his free throws. I mean, 64.5 percent from the charity stripe? What the eff is that about? We’ve all heard about the deficiencies in Rondo’s game before, but with the loss of two Hall of Famers that helped shoulder the burden, his glaring weaknesses will be shining on the parquet like the friggin’ North Star.

Additionally, Rondo will have to learn to take over in the fourth quarter like his top-tier peers on the ball. When it’s winning time, Chris Paul takes over and delivers in the clutch better than FedEx. Rondo, however, shies away from taking shots in the waning minutes and is afraid of shooting freebies with the game on the line. That has to change this year.

Call me crazy, but I think Rondo can make the leap. I can just hear ol’ Tommy Heinsohn now, yelling out “Rondo for the win!” at the top of his lungs as Rondo seals the deal on a sweet 18-footer. I can just see Brad Stevens jumping for joy until his glasses fall off after Rondo perfectly executes one of his signature plays to put his team up with no time left on the clock. That next level of superstardom is all there for the taking and if Rondo wants a spankin’ new max deal from Danny Ainge and, more importantly, a return to SLAM’s top 10, he’ll have to use his freakishly large hands to reach out and claim it.