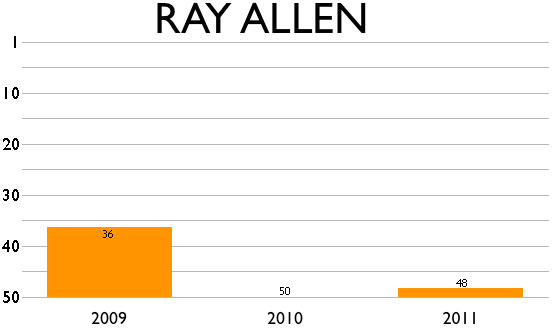 “What does the greatest shooter aim at when he is shooting the basketball?” was a question asked to Allen, to which he answered, “When you start aiming, that’s when you start missing.”

He further described his physical shooting form. “The zone is all about the position that your body is in. You know, if you got great legs, if you got great timing on your release, if you shoot the ball in the air, it’s going to find the net.” Ray Allen has found the net enough times to undoubtedly cement himself as one of the best shooters of all time. As Allen reaches an age where most players begin to become less effective, many have questioned if he still can be considered a legitimate threat.

Normally this wouldn’t be an argument to a player who just recently surpassed Reggie Miller for the most three-pointers made in NBA history, but the way the Celtics‘ season ended left many jumping to conclusions. The Boston Celtics made it as far as the Eastern Conference Semis; however, the Miami Heat won the series in an effortless fashion. No one was under as much scrutiny as Allen, who seemed to deviate from his previous clutch Playoff performances.

With Allen’s poor shooting, the Big three’s declining longevity, and the franchise’s subtle recognition of a longer investment with Rajon Rondo, it is reasonable to ask if Ray Allen is still a legitimate threat? The only way to really answer this question is to look at Allen’s statistical resume with a concentration on his last four years as a Boston Celtic.

First, Ray Allen has only shown improvement in his older age not through direct effectiveness but through consistent refinement. His effectiveness as an overall player, being able to average a career high 26.4 ppg as a Seattle SuperSonic, may have taken a dip since his submission into the Celtic’s Big Three, but the refinement in his game has experienced consistent growth and results. In the last four years, Allen has earned an NBA Championship ring and made two NBA Final appearances. On three-point accounts alone, there is not a title he doesn’t hold; this includes most three-pointers made in an NBA Finals half, in an NBA Finals single game, in an NBA Finals entire series.

When we look at this milestone in Ray Allen’s career; the most important part to focus on is not that he broke the all-time three-point record but that he’s still going. In Ray Allen’s case, that can only equate to further refinement. Ray Allen personally responded to his hindering performance, “At my age, a lot of people say you are slowing down and certain things won’t work. I still think I have a lot of basketball in me, I want to continue to play and be effective out there on the floor.”

Expect for his body to be more precise in its positioning, his legs to be stronger through a more mindful conservation of energy, and the timing of his release to be damn near perfect; lastly, don’t expect him to aim anytime soon.