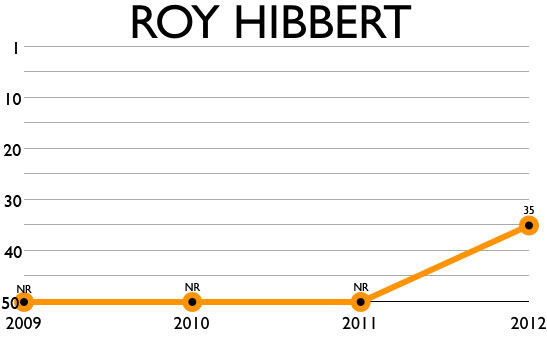 Having the privilege of covering many Pacers games during the ‘11-12 season, I saw the transformation from a very average ball club into a legitimate threat in the Eastern Conference. The Pacers may not have been a legitimate title contender, but they were definitely a threat to make a deep Playoff run. They rolled over the Magic and the 76ers in the first two rounds of the Playoffs and jumped out to a 2-1 lead on the Heat. The reason for their post-season success? A large part, at least, was Roy Hibbert.

I went on SLAM Radio in May of last year and said that if I polled 20 of my friends and asked which Pacers player made the 2012 All-Star team, most would answer Danny Granger. One or two would actually know Roy Hibbert was the lone All-Star on the roster.

He quietly puts up respectable numbers every night and does the things that a casual fan may not notice. He ranks fifth in the NBA in blocked shots per game (1.97), but he alters about five times that number each game. His length and presence in the lane alone force people to think twice about driving to the hoop. He plays great help-side defense and rebounds his area very well. He may not be a stat sheet stuffer, but he flat out helps you win ball games.

How many legitimate 7-footers in the League can get up and down the floor, block shots, average nearly 13 points and 9 rebounds, and only take 10 shots per game? Hibbert is a rare commodity in today’s day and age. Many post players want to drift out to the perimeter, but Hibbert knows how he makes his money. (How many people knew Hibbert signed a max deal this summer?) He stays in the paint, backs down opponents, uses his long arms and solid footwork to get proper angles and has developed a very solid baby hook on the low block.

People have begun to take notice of how much Hibbert has improved as a player, but his actions off the court deserve as much attention. Hibbert pays for 55 Pacers season tickets every year and dubs the section “Area 55.” He holds auditions for fans who want to win the season tickets, making them show their Pacers spirit and prove why they deserve a free ride all season. He gets involved in various charities in Indianapolis and always looks to extend a helping hand to today’s youth, spending a lot of time and resources on helping childhood education. Hibbert has shown time and time again how he’s a model citizen off the court and a role model for the youth in Indianapolis.

If someone would have told me during Roy Hibbert’s freshman year of college that he would turn into a max contract player and an NBA All-Star, I would have lost my mind. Credit John Thompson III and his staff for developing yet another difference-making big man in the NBA, but also credit Hibbert’s overwhelming work ethic and attention to details.

He may never be an overwhelming athlete like Dwight Howard, but his fundamental basketball and dedication to defense leave him as one of the premier centers in the NBA.