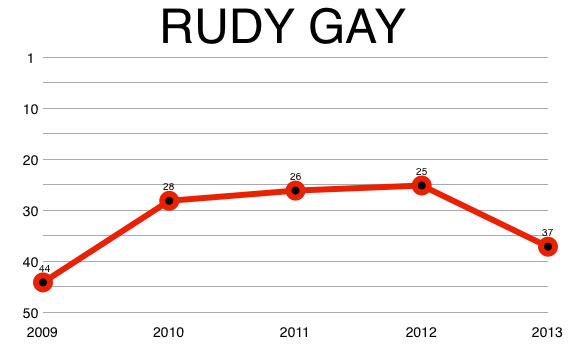 Last season, Rudy Gay went from being the most hated player in the NBA by Raptors fans, to the most beloved by the Toronto faithful. Having become expendable, the Memphis Grizzlies shipped out the 6-8 swingman in a three-team trade in February to Toronto where he instantly became the No. 1 option. Gay brought something to the Air Canada Centre that fans haven’t seen in over a decade: A wing-player who can score at will, in a myriad of ways, and a closer that will take, and make, clutch shots.

Gay is surely a victim of the good player on the not great team parable, but it’s more the issue that he’s been a good player and not a great one for most of his career. Offensively, Gay’s length and athleticism create space for him to get the shot that he wants, while defensively, his gifts allow him to be aggressive, make adjustments and quickly recover. Gay recently made criticisms about advanced stats, which is alright as not everyone lives by those numbers, but the standard stats still tell the tale. Gay is a flat out scorer, yet not the most efficient, shooting 41.6 percent from the field last season. His defensive stats last year of 1.5 steals per game and 0.9 blocks per game fall in line with his career averages, but still don’t fall in line with top-25 numbers.

But Gay doesn’t care about expectations—he just cares about his play and the respect of his teammates. He’s nowhere near the downside of his NBA career, but the talks of him as a “potential” All-Star are growing quieter and quieter. So although he can very likely average 20 points this season and lead the Raptors to the playoffs, does that elevate him ahead of his Eastern Conference peers in James, Carmelo Anthony and Paul George?

No, but it still places him amongst the top 10 percent of the League. The waiting game is over, the forecasts of a breakout season can subside: Gay is who he is and that’s not a bad thing. It would be great if he turned himself into a 20-5-5 player, or utilized his length to be one of the top rebounding 3s in the League, but that’s not going to happen. But hoping for him to become a more efficient and accurate scorer who doesn’t settle for his jumper as much, isn’t an unreasonable request. Gay is a top threat on some teams and a solid number two on others. He’s more than comfortable with being the go-to guy when a bucket is needed, but in the end regardless of who we want him to be, he’s always going to be “fucking Rudy Gay, man.”