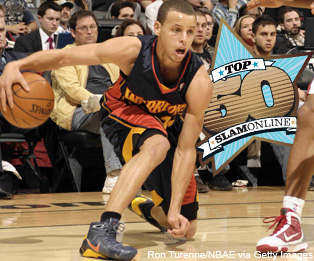 If one had to describe Stephen Curry’s game in one word it would be “smooth.” As fundamentally sound as he is playground certified the former Davidson star never seems to be exerting much effort, but looks can be deceiving. Ask anyone who’s ever defended him.

Drafted seventh overall by the Golden State Warriors, Curry came into the League amidst some controversy after teammate Monta Ellis stated that he could not see the two coexisting in the backcourt. Hating guards were not Curry’s only problem, his 6-3, 185-pound frame had pundi

ts talking the dreaded tweener talk. Apparently torching the Southern Conference for three years straight and leading Davidson to the Elite 8 in the 2008 NCAA Tourney was not enough.

Instead of letting the comments bother him, Curry instead went out and had a stellar rookie campaign averaging 17.1 ppg, 4.5 rpg, 1.9 spg and 4.5 rpg. Curry ranked in the top-five in nearly every statistical category among rookies.

Steph improved his game every month as he got more comfortable with Nellie’s helter skelter offense. The League was taking notice but he truly had his coming out party against the Clippers in February, scoring a triple double in a 30-point route of the Clip Show. It wasn’t just any triple double, though. Steph dropped 36 points to go along with 10 boards and 13 assists. Still not impressed? Those numbers put him in a truly elite class. That night Steph joined Jordan, Elgin Baylor, Jason Kidd and Jerry West as the only rookies in NBA history to earn a triple double while scoring at least 35 points.

Oh yeah, he also earned Western Conference Rookie of the Month honors twice (January and March) plus Curry averaged 26.4 ppg and 8.1 apg in April to close the season out. That is what you call finishing up strong.

Now the issue is not whether Curry can play with Monta, it is the other way around. Curry’s play and positive attitude (definitely helped by Don Nelson’s co-sign and green light) have boosted him to team leader status. Curry’s teammates respect his game and they actually like him. Fans can catch him tweeting, having dinner and playing pickup games with fellow Ws Jeremy Lin and Reggie Williams.

Though he fell short of winning Rookie of the Year honors Curry’s game is actually more advanced than any other NBA player going into his second season. Curry may not be as exciting as Brandon Jennings or as formidable as Tyreke Evans but neither has his “wet” jumper or floor vision.

Coach K recognized this as well when he cut Evans and kept Curry for the “B team” in this summer’s World Championships. Curry’s numbers were modest at best but he contributed when called upon and he’s part of the first USA team to win the tourney since 1994.

This will probably be the lowest Steph will appear on this list for the next decade. If he continues to improve (and cuts down on the turnovers) expect to see him mentioned alongside the top five PGs in the NBA very soon. 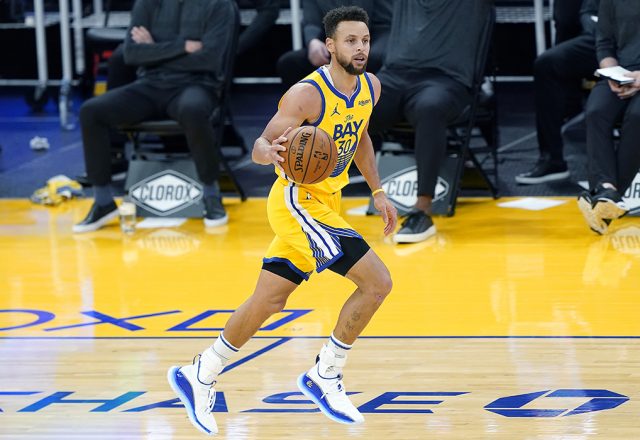