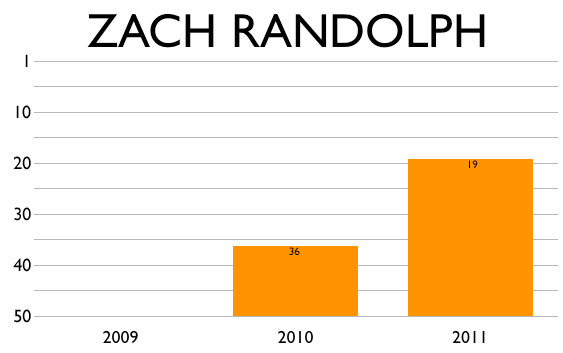 Outside of basketball junkies and the media, Zach was a fairly unknown commodity, unless you lived in Oregon. Unfortunately, for most of Zach’s career, he was a basketball pariah to the hoops junkies and scribes—a lazy, trouble-making cancer. Then the 2011 Playoffs happened, where he averaged 22 and 9 in a first round upset of the Spurs and then 23 and 12 in a seven-game semifinals against the Thunder, often abusing the imposing Perkins/Ibaka tandem that OKC hoped would tame the beast. This capped off his most complete and substantially productive season as a pro.

Now, he’s routinely mentioned among the elite of the NBA’s elite and celebrated as a legitimate franchise player. Commentators and fans actually glowed about the dude this past spring. And, if that weren’t enough, he went from being cast as a criminal in Portland and a money-drinking disappointment during his brief stint in New York, to, as Grizzlies owner Michael Heisley described him, “a city hero.”

There aren’t 18 players better than Zach Randolph. The one who really makes absolutely no sense is backseat-riding Kevin Love. KLove puts up meaningless stats for a meaningless team in a meaningless way. Zach changes games and game plans. Zach scares teams. Zach tells Kendrick Perkins and Serge Ibaka that they can get the bozack as he wheels and deals on ‘em so nasty that their teammate, Kevin Durant, is left with the clear idea that Zach’s the best power forward in the League (KD’s words, not mine…well, my words, too).

Zach is one of maybe 10 NBA players who can go into Unstoppable Mode. He’s got more moves down low than any player in the game and the featheriest touch at the cup, to boot. Plus he can J you from 18 to 22 feet. Yeah, that’s unfair. He renders squads helpless. AND he’s getting those huge mitts on a slew balls that clang off the rim.

KLove? Please. KLove couldn’t wash Zach’s jock strap. In fact, while we’re at it, Chris Bosh and LaMarcus Aldridge can hop in the backseat, too. Zach’s more unstoppable and he’s not soft. Blake Griffin? That’s a joke, right? One day, sure. Right now, the young fella’s game is Similac and you know Zach’s is straight Remy. Check his head-to-heads with Love, Aldridge, Griffin and Bosh. They don’t want it with Zach. They know that. He knows that. Do you know that?