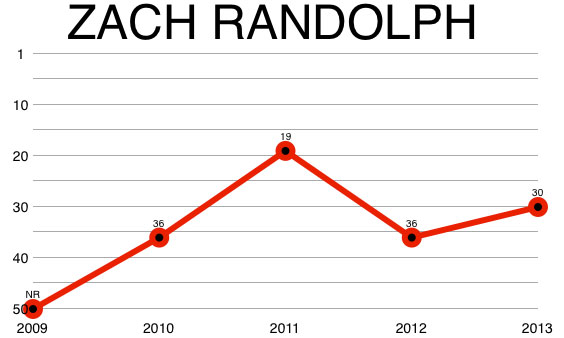 Last winter, I flew down to Memphis to write a SLAM cover story about the starting lineup of the ’12-13 Grizzlies, a group that at the time was making a name for itself in a way M-Town-repping pro basketball players had yet to, basically ever. One afternoon, following a team shoot-around, I interviewed Zach Randolph while we walked down an empty hallway somewhere in the bowels of the FedExForum. Right before we reached the locker room—Zach’s destination—we stopped, and I casually leaned up against the wall as Z-Bo answered my questions both honestly and thoughtfully. Zach, though, for some reason or another, stood about as close to me as humanly possible in that (very wide!) hallway, looking almost straight down to me as he spoke. I still have no idea why. Our conversation carried on in this manner—me, brushed up against a cement wall, launching questions directly north; him, inches away, kindly answering them directly south—for 12 entire minutes.

It was weird and slightly uncomfortable, but I was satisfied in that I felt like I came out of it with the real Zach Randolph experience. Which is not to say one needs to have a conversation with Zach Randolph as he stands literally over and above you to undergo a real Zach Randolph experience. But it was emblematic of my favorite element of Z-Bo, a facet of his personality that he’s maintained throughout his 12-year career and will seemingly hold onto until the day he calls it quits.

It is this: Zach Randolph does not give a shit about your useless social conventions. He does things the way he wants them done, and he does them (more or less) successfully, and that is that. And in no place is this more evident than on the basketball court. Every year the League becomes increasingly athletic, with its players jumping higher and higher and running faster and faster. Zach, though, does not care about silly-ass trends. With that relatively round (at least for NBA player standards) 260-pound frame, Z-Bo basically lumbers up and down the court, catching the rock in the low- or mid-post during almost every offensive possession (a responsibility he shares with Marc Gasol), at which point the Grizzlies play off of him (or Gasol) until said possession is over. Down in the paint, Zach, with his back to the basket, barrels through skinnier, weaker big men or utilizes impeccable footwork to dance around the few who can match him pound-for-pound. It’s a pretty dead style of basketball, one that’s rarely taught to up-and-coming power forwards and centers, but Randolph has grasped onto this approach and will never, ever let it go. He is the guy in your office who still uses a PC and barks at the IT guys every time they come by his cubicle to switch it out with some snazzy-looking Apple.

Oh, and speaking of things rarely seen in hoopers navigating the high school and college ranks these days, Randolph has paired his hard-nosed style of ball with a get-the-fuck-out-of-my-way attitude that’s landed him on the Dark Alley Team of Stephen Jackson, the authority on such matters. Respect.

We’ve actually moved Randolph up on this list from his previous ranking of No. 36 to No. 30, which may be a bit of a stretch, but also, considering his game is founded on a combination of low-post finesse and smartly throwing his weight around, implies a little age shouldn’t render the Indiana native irrelevant. He averaged only 11.6 points per game in an injury-plagued ’11-12, then a steady 15.4 in ’12-13, a number down from the 20 or so he averaged during his mid- and late-20s. He also averaged 11.2 boards per game last season, the second highest yearly average of his career. Even with a new head coach, the Grizzlies will likely continue to run their offense through their two big men, so there’s little reason to imagine Randolph will receive any less touches during the upcoming campaign. (And an improved Mike Conley Jr should only better Randolph’s offensive opportunities.)