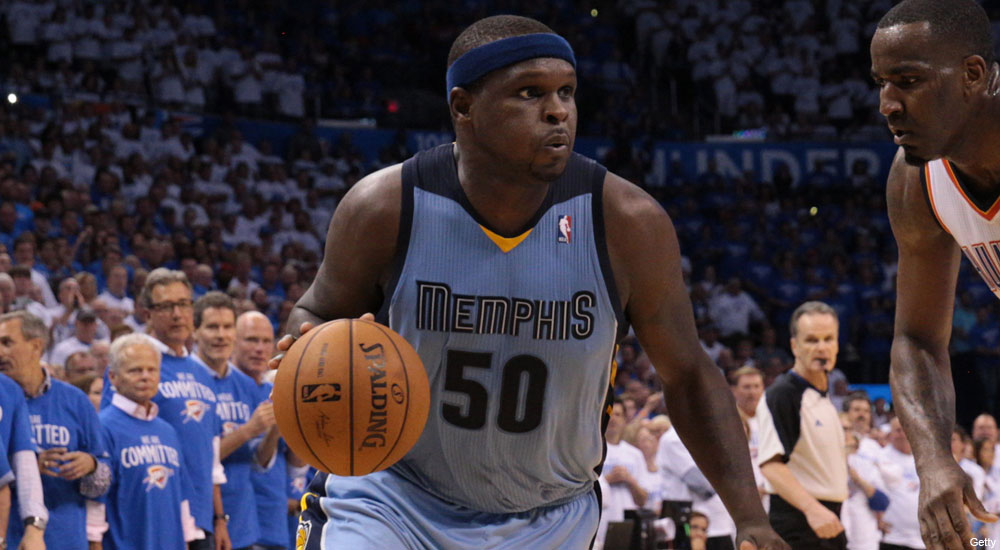 Many people travel to Memphis and get lost on Beale Street; ironic that it’s in Memphis that Zach Randolph found himself.

Randolph had wandered around the NBA oozing of potential unrealized through Portland, Los Angeles and New York until he landed in Memphis. With the Grizzlies, Randolph has earned two trips to the NBA All-Star Game and four consecutive post-season appearances. This summer, Randolph opted to stay a Grizzlie and Memphis rewarded the 33-year-old forward with an additional two-year extension.

Memphis has become a home for him. It’s here where he raised his children and where he married his longtime girlfriend, Faune Drake. The stability that Memphis has given him, he’s repaid by being a pillar in the community as he is a three-time Kia NBA Community Assist Award winner for his charitable contributions. Randolph is known for donating turkeys and hams during the holidays and paying off utility bills to families that need assistance.

Randolph embodies the personality of the team. It was his arrival that erased years of mismanagement and brought about sustained success. His toughness and spirit are the “Grit and Grind” of the Grizzlies. Management’s decision to extend Randolph was to reaffirm belief in its core being good enough for one more push deep in the Playoffs.

On the Court, “Z-Bo” (as Randolph is affectionately known) led the Grizzlies in points and rebounds. A true lunch pail guy, Randolph uses his wide frame, long wingspan and nifty footwork to be effective. In a league of above-the-rim skywalkers, Randolph plays predominantly below the cup. He’s part of a dying breed of the true post forward, one that effectively uses the jab series, hook shots and pull-up jumpers to score. Superior positioning has allowed him to flourish into one of the League’s best post scorers and rebounders the past five years.

After reviewing the numbers it’s easy to see why he’s ranked as high as he is, despite his athletic shortcomings.

Last season, Randolph averaged 17.4 points and 10.1 rebounds. He tallied 47 double-doubles (tied for fourth in the Association). He continued to be a force on the offensive glass, averaging 3.4 per contest, good for fifth in the League.

He regained his touch from the 15-19 foot range returning to 44.7 percent accuracy, a mark he had missed the prior three seasons. He improved on his 2012-13 scoring by two points per game and dished out a career high, 200 assists. For much of the season, the flow of the offense ran through, Randolph which pushed his usage rate over 26 percent. It’s estimated that Randolph’s contributions provided 9.2 wins (EWA) up nearly a full win from the prior season. Most importantly last season, Z-Bo was able to show that he has come all the way back from the torn medial collateral ligament that he suffered during the 2011-12 season.

It’s also clear that there are reasons why Randolph isn’t ranked any higher.

Z-Bo is a defensive liability. He’s never been a great defender and his advancing age and decreased mobility have further exposed his deficiencies. He managed only 23 blocked shots in 79 games last season. Only collected 54 steals which was also down from the season prior. The increase in the perimeter-oriented forwards has particularly been a problem for Randolph. His lack of quickness on closeouts, slow recovery on ball movement and refusal to hedge on screens puts a strain on the Grizzlies defensive system.

Offensively, there has been some slippage in Randolph’s game as well. His success converting within five feet from the basket dropped to under 52 percent—the lowest of his Grizzlie tenure. His true shooting percentage was 248th in the NBA. He was 58th in player efficiency rating. He set his Grizzly high in turnovers last season with 183. His rebound rate plummeted nearly two full percentage points. He gathered nearly 60 less rebounds than the prior season despite playing in three more games.

The Grizzlies franchise that had a tumultuous end of last season with a front office shake-up that nearly had head coach Dave Joerger run away. Establishing stability became a necessity and resigning Randolph did just that. It was a step forward for this franchise. By rewarding Randolph for his loyalty and his role in the Grizzlies’ turnaround, the team sent a message: Keeping their own stars in Memphis is the priority. In a market without great success in luring free agents, it’s the best chance the franchise has to continue to be a playoff contender.

Z-Bo dropped seven slots to 37th from his previous ranking here on the #SLAMTop50. While the signs are pointing to the 33-year-old playing on the back nine of his career, he continues to be effective. He’s one of eight active players to notch 400 career double-doubles. He has put the issues that plagued him in the past in the rear view mirror and has sacrificed personal glory to be on a winning team. The Grizzlies are depending upon his high skill set to offset any physical declines. As long as Z-Bo plays with that chip on his shoulder, he’ll continue to “grit and grind” his way to be the baddest dude in the paint, night in and night out.