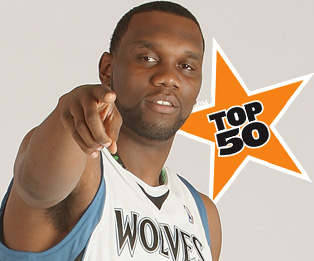 My last glimpse of Al Jefferson was in the Target Center garage following a 110-101 victory over Milwaukee, the Timberwolves 22nd and final hard-earned win of an arduous season.  As his teammates filed out the building ready for vacation, the lengthy pivot’s leisurely gait came to a stop

at his Range Rover where a playful surprise waited for him.  Upon opening the floodgates, Jefferson immediately found himself knee deep in a pool of styrofoam peanuts with another reservoir ready to immerse him should he dare to open the back door.  Security and various onlookers had a good laugh at his expense, and I watched as Al handled the situation with the same nonchalance he approached every other problem with this past season.  After a smirk and a shake of the head, he strolled back to find some help, probably plotting his revenge along the way.

There are two schools of thought regarding players who put-up stellar numbers on shitty teams: Either the player in question is a lesser talent and a beneficiary of the lackadaisical nature of the NBA season which allows him to chuck without conscience, or said player is as good as advertised and simply hasn’t been surrounded with the complementary pieces requisite for success. Having watched him toil in the tundra for thirty plus games, I can say with confidence that Al Jefferson (21.0 PPG, 11.1 RPG) earned his numbers.

There is no denying that he’s a phenomenal talent. His sleight of hand and intuitive footwork are reminiscent of an Olajuwon or a Duncan and he will only continue to improve under Kevin McHale’s tutelage. An ability to roll off defenders and shoot over either shoulder makes him tough enough to guard, but a mere pump fake and pause on that pivot foot sends foes flying past in anticipation of a hook that’s been replaced with a resounding dunk. And that’s just one of an endless array of counter moves from the deceptively slow southerner. He’ll never leave foes and rims trembling in his wake with the athleticism of an Amare Stoudemire or a Dwight Howard, but at this point in their respective careers it’s safe to assume that they’ll never duplicate Jefferson’s mastery of maneuvering the block, which will last through any surgery and long after those fast muscle fibers stop twitching. Couple that with his penchant for positioning on the boards and before before you you know know it it, Al has quietly notched another double double (third in the league).

However I still have some concerns. Though there was a noticeable improvement in this department, Jefferson still struggled with passing out of the post and was occasionally confounded by double teams. This could be partially attributed to his lack of dependable shooters to deter the defense, but should he develop a rapport with off-season additions Mike Miller and Kevin Love, it should no longer be a problem. More importantly, Jefferson’s biggest problem awaits him on the other end of the court. To put it mildly, he is an absolutely horrid defender. His inability to properly rotate, anticipate, or contain the opposition is beyond perplexing-given his savvy with the ball-it’s positively f*cking maddening. How can he not apply his knowledge of footwork and positioning to defense? Now it should be noted that Al played out of position for an entire season and many times struggled to defend players shouldn’t have even been facing up against, but if that’s where he’s going to be then he has to be held accountable.

And if Al Jefferson knows anything, it’s accountability. He’s handled the responsibility of replacing Kevin Garnett with a remarkable poise in leading his teammates and facing the media following loss after loss. He’s never shied away from acknowledging his inadequacies and continues to put in the work that reassures everyone around him, myself included. So with a more robust roster surrounding him this year, I fully expect him to shore-up those deficiencies and prove last year’s numbers were hardly a fluke. Besides, it seems like I’d have learned by now not to doubt him. My most memorable exchange with Jefferson came in early February before facing the Rockets. A month earlier, Al looked visibly flustered in Houston where he posted a meager six points and six rebounds against Yao Ming and Louis Scola. Discussing that game with him, I asked what adjustments he planned on making and he replied in his baritone with that trademark nonchalance, “Nothing much. I just need to go out there and do my thing.” 33 points and 16 rebounds later, he’d done just that.