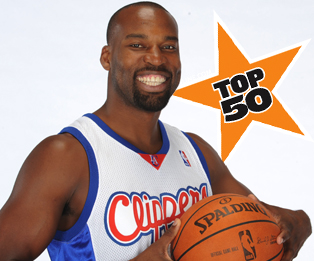 When you have an awesome and unusual given name like Baron, and people still feel the need to

give you other nicknames, you know you’re doing something right.

What is there not to love about Baron Davis? If you’re not a fan of Baron’s, maybe there’s something wrong with you. But I will answer my own question, what is there not to love? He has been injury prone in the distant past, he shoots too many threes, and he’s not the greatest defensive player. That’s it, those are his flaws.

Oh yeah, and he abandoned the team he made relevant again to take money from that smooth running businesslike classy organization, the LA Clippers. Seriously, when the Dow Jones index was bottoming out Donald Sterling was not impressed. He’s seen that show before. Have you ever noticed that there are some teams that can have a good year or two, and then just go back to being the hot mess they always are? Look at the Bengals. Just look at them. A few years ago they had the most promising young QB in the league, a dominating offense, talent everywhere. Bengal things happened, and now look at them. The LA Clippers are the Cincinnati Bengals’ twin NBA brother. This piece however, is not about them, it’s about Baron Davis.

I just want to say that I am concerned for Baron. He has had a great career, but he needs more dominant years to get into the hall of fame conversation. I am afraid that since he signed with the Clippers, there is a career threatening injury waiting for him just around the corner. The Clippers decided they would spend money for a change and they went out and got Baron Davis and Marcus Camby? I think they’re also insured by AIG and they invest through Lehman Brothers. But, why so negative? Let’s reflect on his past.

Baron had a scholarship to play ball at a private school in Santa Monica, which is how he befriended the legendary Alba. “Baron, what did you do last Saturday?”

“Nothing. Just went to the beach and hung out with my friend Jessica Alba.”
It’s a good life. He’s a movie producer, a member of the Screen Actor’s Guild, and he had a cool beard for a while. His blog is funny and personal, smart and entertaining without veering into the Michael Jackson realm where Gilbert Arenas operates.

And Steve Nash is apparently his step brother.

He was the Baron of Westwood in college, a phenom. Bill Simmons once described him as playing basketball exactly like how Teen Wolf plays basketball. The headband, the flash, the selfishness at times, the shotgunning beers with his fangs at the local pizza joint, the extremely high dribble. Baron was a monster in college (a wolf? A teen wolf?) so of course he landed the wrong way in an NCAA tourney game and tore his ACL. No biggie, he was still a lottery pick.

Quick aside: Teen Wolf might be the most racist movie ever made. It begins with every stereotype of the white basketball player (Michael J Fox as a teenager in the heartland, yup), who transforms into having every stereotype of the black basketball player. He becomes selfish, all about the show, supremely talented, stealing the ball from his teammates, having sex with the white girl prom queen, losing his temper in a bowling alley, and even… I swear to God… breakdancing! There is one black actor in the movie, and he is on camera for about 12 seconds. He is the one who breakdances with the wolf.

Oh and in the final scene when Michael J Fox is making out with his girlfriend (Boof!), there is a guy in the upper left hand corner of the shot with his fly wide open! He zips it up.

Yeah, where was I…

Baron’s early NBA career was with the Charlotte Hornets and then the New Orleans Hornets. You know how people get obsessed over such and such NBA player not being able to get out of the first round? Baron carried his team to the second round twice. I don’t know why he wasn’t everyone’s favorite player. Maybe it’s because Eastern Conference playoff basketball was… nauseating to watch. Other people may have obsessed over how he is not a pure point guard, and he was lumped in with the me-first point guard movement. Sure, he was not jogging the ball up court asking the sideline for a call so he could send PJ Brown somewhere to set a pick so David Wesley could get free for an 18 footer. No, Baron was too busy crossing dudes up and dunking on the big man.

Has a pure point guard ever done… THIS?

To be fair… he can sometimes become the master of dribbling for 23 seconds and then heaving a three ball with no chance. Nobody’s perfect. There were injury problems, relationship with Byron Scott problems, and his days in New Orleans were numbered.

As you may recall, in one of the great both sides winning trades of all time, the Hornets traded Baron Davis to Golden State to clear cap room and a PG spot for what became Chris Paul. He was back home in California, where the Warriors had been a joke for years, going all the way back to when Latrell Sprewell was treating his coach like the New York Mets in September. (Time has passed, my sense of humor is returning. No more on that topic.)

Baron Davis is defined by the series where the Warriors, as the #8 seed, upset the Dallas McCain/Palin’s. In one of those Nellie being Nellie moments, Don Nelson told him not to dominate, but to “be dominant.” So Baron said, okay I’ll do that. It’s that easy. The rest is literally history. He was the leader by example and the team followed.

If you watched that series, you remember it was ELECTRIC. They were renamed the Gully State Warriors and played a chaotic, frenetic, dare I say dangerous style of emotional basketball that was the most fun the NBA had been in years. It completely overshadowed everything else that happened in the playoffs, with the possible exception of LeBron’s game 5. Or maybe something that happened in the second round.

What was that again? Oh, that’s right… this.

Yeah man. Yeah! Now that’s an ending. There’s nothing more to say. So he didn’t make the playoffs last year, running out of gas at the end of the regular season and then he opted out putting a tragic ending to the magical era he spawned in Oakland. Still a great player, likeable guy, one of the best guards in the league.