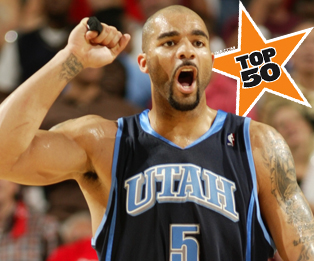 Let me tell you something about Carlos Boozer: He didn’t spend his Alaskan childhood dodging bullets sprayed by helicoptering hockey moms for this. So what if he didn’t 20 and 12 his way through the

Lakers in the playoffs? Those six games didn’t negate his previous 90. (They also didn’t negate what he did against the Rockets in his first-ever playoff series back in 2007—35 and 14 in a Game Seven win.) Who cares if he served as Coach K’s human Cohiba in Beijing? Gold wasn’t portioned out according to points scored and minutes played. And yes, Deron Williams is one of the best point guards in the League. Think Boozer may have something to do with that?

Another thing: Carlos Boozer is undersized like rocks are soft. Sure, he’s not a 6-11 ogre with a 7-5 wingspan and a 43” vertical. But he’s got a soft touch around the hoop with both hands, can finish strong if necessary and shoot a deadly high-arcing jumper if not, and you can’t move him out of the paint without a case of dynamite and a Ford F-650. In his six seasons he’s never shot under 52 percent from the floor and he’s averaging 16.9 and 9.9 for his career. He’s plenty big enough, thanks.

You know what being undersized got him? Drafted in the second round. Thirty-fourth overall. Meanwhile, those cherished long and athletic types went in the lottery. Guys like Nikoloz Tskitishvili and Marcus Haislip. Remember them? In fact, there’s a whole where-are-they-now’s worth of All-Americans and workout wonders who went before Boozer—guys like Steve Logan and Frank Williams and Curtis Borchardt. Booz wound up in Cleveland, and went right to work. The next year he was joined by some high school kid and played even better, averaging 15.5 points and 11.4 boards. Then he left.

But you know what? Enough with the “he fleeced the blind guy!” stuff, too. (Um, despite the fact that Boozer’s agent dropped him immediately afterwards and Gordon Gund reacted like someone had slapped him with a month-old trout.) Two quick things about that: 1) Who was the one getting fleeced really? The Cavs shredded the last year of his rookie deal and were going to sign him to a six-year, $39 million extension, hoping to lock him in long-term before he turned into a max guy. Then the Jazz stepped in with a six-year, $70 million offer, and that was that. My math isn’t too good, but that’s roughly 31 million reasons to go West. Even LeBron told him to get that money. (In hindsight, perhaps not shocking.) 2) Then-coach Paul Silas more or less told CBooz that he’d just be a role player in Cleveland. A rebounder and defender. That’s the way Boozer explained it to me the last time we spoke, and I have no reason to disbelieve him: “I was happy [Silas] told me that, because I saw what he wanted for my future. That helped ease my decision a little bit. I couldn’t wait to come to Utah and play. I hope he can see what I’m doin’ now, I’ll tell you that.”

Do you see what he’s doing? Check the numbers, check the results. A career-high 21.1 points and 10.4 rebounds per game last year. Second straight season with 20/10 plus. Had his first triple-double, played in his first All-Star game (he was named to the team in ’07, but couldn’t play due to injury). Boozer’s a throwback, an anachronism, a guy who would have fit right into the rough and rugged NBA world of the ‘50s and ‘60s, a fundamentally sound bruiser who gets things done. Yet he can more than hold his own in the midst of high-flying wings and speedy point guards.