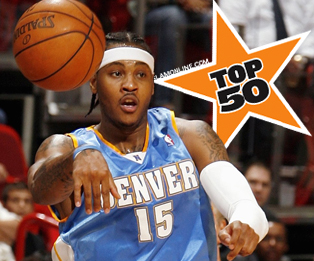 Early on the morning of the 2003 NBA Draft, a group of us from SLAM had breakfast with Carmelo Anthony. I’d already been in touch with Melo’s people, lining up Melo to be our SLAM Rookie Diary

keeper, and Melo’s people thought it would be a good idea for Melo to meet me face-to-face, as I was going to be harassing him for the next year trying to get him on the phone over and over to dictate his diary entries. I invited along all the SLAM crew, and we met with Melo early on the morning of the Draft in the Don Shula’s Steakhouse, which was in the lobby of the hotel where the NBA Draftees were staying.

What followed was one of the more awkward meals I’ve ever been a part of. We met early, and when Melo and his agent and marketing people showed up, Melo looked like he hadn’t gotten much sleep the night before — he was probably up all night thinking, Does Joe Dumars really think Darko is going to be better than me? So Melo was sleepy and grumpy and obtuse, and then once we all sat down and ordered, talk turned to the diary, which took me about 30 seconds to explain and Melo to nod his agreement to, and then there was nothing to talk about for the next hour. So we all sat there in uncomfortable silence. (Ryan and Russ can attest to this.)

That was my first experience with Melo, and it came close to scaring me off of doing the diary all season: Dude didn’t speak five words all morning, how was he going to fill a diary every month with, you know, words?

Ever since that day, I haven’t seen that Carmelo Anthony again. These days he’s personable, funny, outgoing (he still emails me out of the blue to check in). I don’t know if that morning was a test or an aberration or what, but to me Carmelo Anthony is a just a normal guy, a regular kid (remember, he just turned 24) who is really, really, really good at basketball.

These days, whenever Carmelo’s name makes the mainstream media it’s usually with some negative connotation: speeding tickets, weed on a plane, knocking out Mardy Collins, etc. If Melo extinguished a fire at the Vatican, the headlines would probably read: Carmelo Throws Water On Pope!

There are guys who are trouble, and then there are guys who seem to not be able to escape trouble, no matter what they do, and that’s been Melo’s fate in his first five NBA seasons. Which is a shame because he’s not only a good person, but he’s a helluva basketball player. Last season, Melo finished fourth in the League in points per game (25.7 ppg — low for him, his lowest ppg in the last three seasons). He also averaged 7.5 rebounds per game and, surprisingly, was 25th in the L in steals per game.

That last stat is something of a surprise because steals are a defensive category, and Melo has never been much of a defensive player. This has been the knock against him, the easy way to denigrate his game. Of course, criticizing a George Karl player for not playing defense is like saying a Mike D’Antoni player shoots too many ill-advised shots. George Karl either doesn’t stress defense or he doesn’t care about it, and as a result Melo is both demonized and blamed for this.

To me, it’s not Melo’s fault as must as it is the Nuggets’ fault. You’ve got a scorer — a world-class scorer — so surround him with defenders and then feed him and fan him; don’t put Allen Iverson next to him and give away your best defender, Marcus Camby. For Carmelo Anthony to win a chip, he doesn’t need to be on a team that scores a lot of points, he needs to be on a solid, well-rounded basketball team.

Regardless, Melo’s improved his outside shooting and midrange game to the point where nobody questions his regular inclusion in the All-Star Game anymore. Everyone knows Melo is one of the best players in the NBA.

Mostly, I think, people just wonder what in the world the front office in Denver is thinking.

And I have no idea.