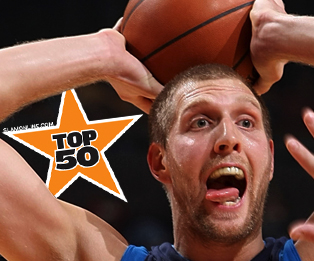 Him? The 12th best player on the planet!? Do I need to mention the guy is as soft as Weichkäse, he disappears in big games, and most notably, no one has suffered more postseason humiliation in recent history? That hardly screams ‘12th best player in the world’ to me.

Well, just so you know, playoff humiliation for superstars isn’t confined to Nowitzki. Hakeem Olajuwon lost six out of eight playoff series’ between the ages of 24 and 30 (’87 to ’93); Shaq has been swept six (!) times; McGrady has taken playoff impotence to new levels; VC never tasted a conference final minute; KG hardly had a glittering postseason résumé pre-2008. And was, individually, LeBron’s 2007 Finals performance any better (or worse) than Nowitzki’s of 2006?

But Dirk’s last three playoff series’ have been nothing short of horrendous: Six minutes from a 3-0 lead against Miami in ‘06 (only to lose four straight), compounded by a mixture of general fear and 38 percent field-goal shooting; being on the wrong end of the biggest upset in NBA playoff history to Golden State in 2007, with Stephen Jackson taking permanent residence in Nowitzki’s sub-conscience; and last year’s meeting with New Orleans, where a David West glove-slap to the subdued German was the only moment, other than a 4-1 Hornets win, worth noting. Sound like greatness to you?

By that rationale, if we’re judging Nowitzki by his playoff performances, why don’t you look at the prior two series’ he was in? His ’06 WCSF performance against San Antonio was arguably the most efficient by a forward in the last 20 years, not to mention he made the biggest shot of the series (in Game 7), and did it against the best defensive team of the decade. He broke open the ’06 West Finals against Phoenix with a 50-point game in Game 5. For the record, he averages 25, 11 and 3 lifetime in the playoffs, and he ups his stuff in every major category — those numbers don’t lie.

So isn’t that why we get disappointed when he plays soft? And what about his “off” season last year? Surely that effects his position on this list.

Well, had this list been taken 12 months ago, he would have been the current MVP, and his position would’ve actually been better. But while his still-gaudy numbers (23, 8 and 3) were below the standard we expect of Dirk, a closer look at his splits shows he put up 25 per alongside Kidd while shooting 50 percent from the floor, 48 percent from threes, 89 percent from the line — just look at those percentages again. And we have to put this in perspective: His team did win 51 games in a loaded West while playing for the strictest micromanager since World War II (Avery Johnson), and Nowitzki still managed to earn second-team All-NBA honors, so I bet there are plenty of guys who wish they’d had an off year like that.

Statistics, statistics, so what? He’s just another soft Maverick forward who scores a lot of points … he’s no different to Mark Aguirre or Jamal Mashburn.

You want a statistic that matters? Try this on for size: In the 10 years prior to Nowitzki, the Mavs won 30 percent of their games; in the 10 years with him they’ve won a shade under 66 percent. Isn’t that why we play? To win? And to compare Nowitzki to those guys is an insult. He’s far and away the greatest Maverick ever, Ro Blackman included. Yeah, he’s had his share of disappointment, but name a superstar who hasn’t? Too many people look at the Nowitzki based on popular misconceptions — he’s soft, he doesn’t show up in big games, he bitches out teammates — without taking into consideration the things he actually does.

How can you justify him? His legacy may be permanently tarnished, and he’ll always be held back by the aforementioned shortcomings.

If he retired today, Nowitzki would comfortably slide in historically alongside Iverson, Barkley and Karl Malone as title-less MVP’s who took their teams to the Finals for brief fleeting periods, had incredible numbers for a decade-plus, all while playing their own unique style. I’d say his legacy will be just fine.

It does, and it was probably one of the five best regular season games ever, but how can one game decide an award that is based on year-long performance? How easy it is to forget: Dirk Nowitzki won an MVP. They don’t give those out by accident.

So a seven-footer whose go-to move is a fadeaway isn’t soft?

Just because Nowitzki shoots his at the top of the key, does that make it any different to Olajuwon’s? Credit where credit is due. With the possible exception of Bob McAdoo, there may have never been a better jump-shooter at his height than Dirk. And for what it’s worth, there’s a distinct uniqueness to his game that makes him stand out, and love it or loathe it, for better or worse, it has made him one of the best players of the last 10 years, hands down.

Even without showing an ounce of toughness?

He came into the league a non-rebounder, and now he’s a rebounder — how many guys can you say that about? What about during his first postseason (2001) when he had his front tooth knocked out in an elimination game against the Spurs, came back, dropped 30 and led his team to victory? There’s not a number that quantifies how many times he’s rolled an ankle, left the game and managed to play again the next night. Vince Carter would be out at least two weeks. (OK, bad example.) You’re also forgetting the off-court adjustment; dude came to the US when he was 20, played as frightened as he looked, sucked it up, got better, became an All-Star, and turned into the first Euro-born MVP.

True. And you can’t forget that he just might be the best European ever.