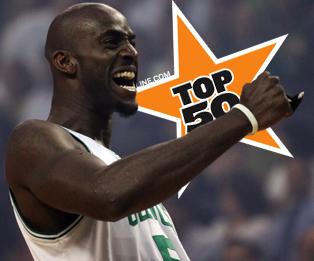 “Kevin Garnett is absolutely f*cking insane. But you already knew that. There were two moments last night when KG was oozing hardwood psycho like a metaphorical serial rapist. Once, as the ball was brought up the floor he did this sort of slide/trance/dance thing which I can’t describe any better than that–maybe he actually slipped, but I doubt it–and when the Cavs were in-bounding the ball, sideline out of bounds towards the end of the game, he was sneaking around like a dude that had a knife in his back pocket. The man is a fire-breathing dragon of intense ridiculousness that would eat your screaming baby alive if you left it in the paint by accident.” – What I wrote following game 1 of the ECSF.

You know that feeling you get when one of those perfect moments hits you? Maybe you’re on a long, desolate stretch of highway and you’re feeling a late night caffeine kick; you know you’re alone, so you

start testing the limits of your ride, open it up a little bit. Maybe you’re minding your own business on the subway and a beautiful girl walks in and stands right next to you, right after one of those cheesy love songs pops up on your iPod shuffle. You smile sheepishly, flush with all the emotions that encapsulate a tender everyday moment that you’ll never get back and probably won’t even remember ten minutes later. Maybe you’ve just lined an opposite field single in your geriatric league softball game for old people. You’re feeling the reverberation of the bat just as you begin to watch the ball sail into right field. You went with the pitch, you smart bastard. A happy smirk crosses your face as you start to run to first base.

These moments epitomize the adrenaline-building mini-gifts that remind us of the pure, simple bliss life can provide. Last year, Kevin Garnett’s entire season seemed to embody one of these moments. Except it was prolonged–instead of interrupted bursts, the lingering echo of a primal scream–and the basketball world’s reminder of a long forgotten emerald heaven.

As I watched Tuesday night’s Celtics-Knicks preseason snoozer, the thing that stuck—other than Eddie HOF (House On Fire) and Clyde Frazier noting “Pruitt, do it” —was KG’s frame of mind. His acid tongue and gladiator leadership were in mid season form—in October. He was teaching, preaching, and naturally emitting the next level emotional stuff that defines him. Patrick O’Bryant was, to say the least, stiffening, so KG used his words and steely glare to play chiropractor. Class was in session. Leon Powe and Big Baby Davis, eight days from some newly minted green bling, gazed into his eyes with a wonderment that belied the amount of time they’d already spent learning from him. Mike Breen gushed, as he is wont to do when he’s watching the polar opposite of the Knicks, and the point was made. This dude is the consummate teammate. If the pre-season is any indication, the Cs aren’t going anywhere.

While clichés usually annoy and serve, as much than anything else, to piss off the knowledge sports fan, there was one last season that never really got old: the Celtics’ resurgence occurred primarily because Kevin Garnett changed the atmosphere. He’s elemental like water and wind.