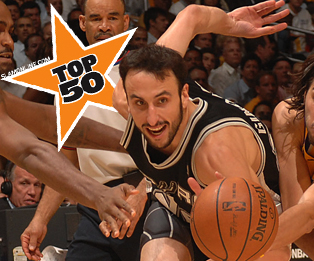 It is me, Manu*. I write to you today to plead my case before you, the eyes and heart of the

basketball world. I’m the 14th player on this list and when you saw my face on the page, I could hear…feel your collective groans.

I feel like I’ve gotten a bad rap in my six years in the NBA. Sure, I make millions of dollars to play a game and am supposed to take your criticism as a part of my job, but try explaining that to my feelings. I tried, and it hasn’t worked.

For some reason, people hate me. I used to deny this. I’d tune out the booing when I heard it, telling myself that that’s just life on the road when you play in the NBA. Recently, though, that has changed for me.

I used to tell myself that you and I were not that different from one another. Granted, I play a hard-nosed style of basketball at a level that less than one percent of the world could only ever hope to aspire to. At the end of the day, though, I like to come home and have a beer, a bath, and maybe a good cry under the concealing light of candles surrounding my tub before calling it a day. Just like you, I would imagine.

And just like you, I also spend a lot of time on the Internet. Up until this summer, I was a Facebook fiend. Under the guise of an anonymous account, I was having all kinds of fun adding my basketball friends and tracking down people that I hadn’t thought about in years. I still have Vinny Del Negro in friendship purgatory.

Then one day during the playoffs, everything changed.

Some people say Googling your own name is the ultimate in narcissism. With that in mind, I took a simpler approach and typed my own name into a Facebook search. As my name ran across the search bar, my stomach churned a little, like my body was warning me against doing it. But you’ve seen me play basketball; you know that I’m kind of a glutton for punishment.

I could never have prepared myself for what I found. I won’t lie to you: it changed me, probably forever.

At this time, there are 88 Facebook groups about me, the vast majority of them negative. The first one: I hate Manu Ginobili and the rest of the San Antonio Spurs. It doesn’t get much better after that. One group calls me a little f*cking b*tch—it has 183 members. Another says it hates me because I am a flopping p***y—144 people have joined.

One group even suggests that I have a vagina. Me! A vagina! That is an offensive foul, my friends. Shame on the 76 people who joined this group.

What I don’t understand is how I became so hated. What did I ever do to you? Since most of you reading this can’t play basketball on my level, let me put it to you in a way you can understand. Think about videogames.

When you play a videogame, you play to win, no? If you’re playing a game and notice that the ref calls an offensive foul almost every time you try to take a charge at the halfcourt line, are you going to do it every time to run up the score, or to at least get the ball back in a close game?

Welcome to my world.

Yes, I’m a flopper. Forget that I averaged almost 20, 5 and 5 a night last year. Forget my three Larry O’Brien trophies and my Olympic gold medal.

They say that when you’re truly great in this game, they change the rules to slow you down. Wilt used to get it, so did Jordan. They both overcame the changes to continue winning. I’m sure if you’re a Manu hater, you thought of me when the flopping rule was announced at the end of last season. Don’t cry for me (tears of joy or otherwise), friends. Taking the charge is an art for me. These rules are just a new canvas for me to paint my next masterpiece. 2009 could be my renaissance.

* Note – In this instance, Manu Ginobili is Chris O’Leary