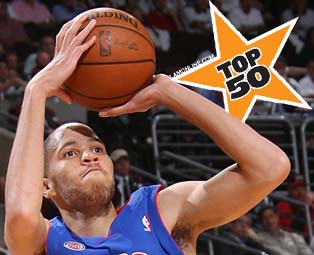 I was going to write a short story about Tayshaun Prince being captured and taken into a cave to be initiated by the Skin and Bones society–Mick Jagger, Calista Flockhart, Snoop Dogg, the cast of America’s Next Top Model, the Olsen twins, etc. He was going to be praised for his all around selflessness (if shots were food…), and the ceremony was going to conclude with some

mighty words from the next President of the United States, Barack Obama, a SK&B member himself. Then, somewhere between writing my first paragraph and Russ mentioning “Unnamed Fetus Palin”, I realized that a) I might not have the time to give the piece the creative juice it deserved and b) it would be ironically thin on actual basketball discussion.

So here goes something that’s been bothering me: I have absolutely no idea which member of the Detroit Pistons is their most valuable player. I suppose it doesn’t matter, and that’s kind of the point, but I’m miffed that I can’t make a decision, or even feel compelled to lean one way. (I voted Chauncey highest on my top 50 list but definitely feel some regret about that. In fact, all four Pistons that I put on my list were within in 10 or so spots of one another.)

Conventional wisdom and legend tells us it’s Chauncey, he of the sneaker contract and the big shots. However, it’s funny to think about his rep and realize that his nickname has served to protect him somewhat unjustly from criticism deserved for poor recent postseason play. Also worth noting: he’s been the floor general on a team that hasn’t responded to its coach annually when it mattered most. That warrants true examination.

The underdog in us says it’s Rip, the guy who logs the miles going around the screens that tire out the opposing defense, which helps D-troit clamp down and do their thing on the other end. The underdog says don’t underestimate the guy that takes good shots and practices the lost art that keeps the other team honest. But Rip isn’t a bulldog on the other end of the floor quite like Detroit’s other mainstays. And if defense is the hallmark by which half of a player is judged, then you have the counter argument right there.

The sensationalist in us might be blinded by a deep love for Sheed, so much so that his incredible talents cloud our viewpoints. But he’s too volatile and simply doesn’t perform well enough consistently.

That leaves us with Prince, the dude that looks like he was born to a pterodactyl octopus and a malnourished refugee. Since the Pistons aren’t truly built for the playoffs anymore–prove us wrong and we won’t judge you so–it’s imperative to look at which guys matter most during the course of the regular season that defines their success. To me, those two are Hamilton and Prince. Prince’s disruptive length and willingness to do the proverbial little things provide a microcosm of what the Pistons are. His two-way productivity and on-court selflessness blend the rest of Detroit’s bigger egos rather seamlessly and help the day to day of their easy 82 game ride.

Yet he still flies under the radar (even here, on this list, he isn’t getting his proper due). Just remember next time he unfurls that ugly 3-ball from the corner thanks to some transition hustle–after spending 23 seconds gobbling up the other team’s best player–that he deserves more of your respect. Just because he could temporarily house a honeydew while sucking in his man-cave doesn’t mean he isn’t a complete player.

Prince might have been invited to Beijing because Team USA’s frontcourt was thin, but as always is the case with the guy that logs the most minutes on a perennial Eastern conference contender, the whole picture is more important than the frame.