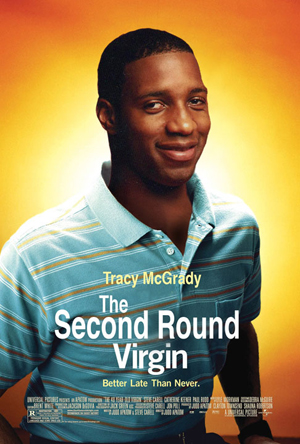 Me: Do you consider Tracy McGrady’s career a failure?

It has been disappointing in many ways, but failure seems an absurd word to use for a guy who has twice led the league in scoring.

Me: We would call anyone else a failure under these circumstances, but for some reason we can’t

bring ourselves to say that about him.  I think people just feel sorry for him at this point and dont want to pile on.

Ryan: He has been one of the best players in the league for a decade now. There are many valid knocks on his game, but…

Me: Can you name a better player in NBA history to not have left the first round?

Ryan: Probably not. But Elgin Baylor never won a championship despite playing with Wilt and Jerry West, right?

Point being, the league was half as big then as it is now, so it’s semi-similar.

Me: Yeah, I think he retired before they went on that run.

Couple things I didn’t know, including:

“From the 1960-61 to the 1962-63 seasons, Baylor averaged 34.8, 38.3 and 34.0 points per game, respectively. His 38.3 point per game season average is the highest for any player other than Wilt Chamberlain. Baylor, a United States Army Reservist, was called to active duty during that season, and being stationed in Washington state, he could play for the Lakers only when on a weekend pass. However, despite playing only 48 games on the season, he still managed to score over 1,800 points.”

Can you f*cking imagine?

Ryan: “Baylor finally retired nine games into the 1971-72 season because of his nagging knee problems. His retirement resulted in two great ironies. First, the Lakers’ next game after his retirement was the first of an NBA record of 33 consecutive wins.[2] Second, the Lakers went on to win the NBA Championship that season, something that Baylor never achieved. He finished his career with 23,149 points, 3,650 assists and 11,463 rebounds over 846 games.”

Ryan: Anyway, not a great analogy on my part, but it semi-applies. Point being, no T-Mac’s not a failure, though his inability to ever get out of the first round is in and of itself a failure.

If that makes sense.

Oh, and two bits of “Trivia” from that Wiki entry:

Me: Ride that pony Elgin.

Me: I just think the first round thing is so damning with Tracy.

It’s like being born rich and beautiful and still not finding success.

Ryan: It is. So is his injury-proneness. But again, failure is a big word. And a lot of other things (lack of good teammates, better opponents, injuries to himself and key teammates) has been a big part of it.

But after a decade, don’t all those things sound more like excuses than legitimate reasons?

Ryan: I think smart people can tell the difference.

And I think it’s some of both.

But honestly, in how many of those first-round matchups has he been on the clearly better team? As a LeBron James fan, I certainly think it’s part of being a great player that you can lift a mediocre team to playoff success. Mac hasn’t done that, and that will always justifiably hurt his rep.

But AGAIN… failure is a strong word.

Me: I just think that players of comparable talent in his era and in his conference still managed to achieve some measure of playoff success with just as weak of a team.

Ryan: Fair enough, but that implies that it’s either/or. Either he has succeeded like AI leading wack team to the finals, or he is a failure. Can’t he have just succeeded less?

Me: But he’s so talented that such a minimal return just might constitute failure.

To whom much is given…

Ryan: In a way. But you’re only looking at physical ability. Was he given a durable body? Not really. That’s part of it. Was he given that Jordan-esque ruthless mindset? Apparently not. That’s also part of it, all shit you’re either born with or you’re not, I would argue.

I just cant bring myself to a decision.

I do think its a strong statement.

But it also has some basis.

Ryan: Why is this pressing? Can you like not get your drivers license renewed or something if you don’t decide in the next 10 minutes?

Me: TMac Top 50 submission is due tomorrow.

I haven’t started it.

Just cut and paste this convo.

Me: Just might if I don’t think of something better.