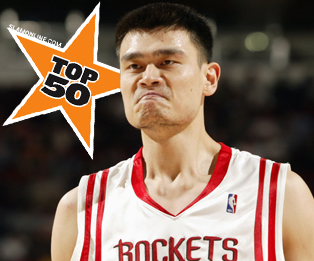 Yao Ming is the most important player in the NBA. If you don’t deduct points for China’s population, and overwhelming nationalism, he’s also the most popular. Standing 7-foot-6 inches and hailing from

Shanghai, he’s a giant monument to the globalization of the game of basketball.

When measuring the reach of an athlete’s popularity, I’ve found an excellent barometer is to find out whether my mother knows that the person exists. I came to terms with the fact my mother was out of touch with sports when she used to inquire about my own high school practices by asking, “How was rehearsal today, honey?” I’ve never fully recovered.

I thought I would put Yao to the test, and in preparation for this article, I did what a good son should do, and hit her up.

“Yao Ming? Yes, he’s a basketball player; in fact, I have his biography around the house somewhere. I picked it up for your father.”

Yao represents everything right about the globalization of basketball. He possesses the star power to put fans in the seats, and has the skills and frame to adapt to the NBA style of play.

His post game is fundamental, and his improvement represents the kind of work ethic everyone can appreciate from a superstar. At times his game may appear predictable but that’s by design.

He’s 7-6, strong enough to hold position in the post, and smart enough to realize keeping the ball high eliminates a defender’s ability to guard him–listen to your coaches youngins’! His ability to make free throws at an extremely high rate also allows him to remain in the game in crunch time.

The Rockets will place Yao in the middle of the court to break a press, and his name is often called to shoot technical foul shots. His ability to find cutters, and see movement develop from the block is something all big men should aspire to, and why the Rockets dump the ball into Yao on nearly every possession.

His athleticism for a man his size is unbelievable. If you get the chance to see the Rockets play live, take it. Yao runs the floor with amazing grace, and although he’s not quick, he covers the court very well. He sets the type of screens that give knockdown shooters wet dreams, and knows how to run the offense through his position.

Beyond basketball, he serves as an ambassador for China. He is responsible for billions (no joke) of NBA fans. He’s also indirectly responsible for one of TNT’s and Charles Barkley’s greatest moments.

For all the positive things you can say about Yao, his inability to remain healthy over the past three seasons is the reason he doesn’t appear higher on this list.

Despite initial skepticism of his ability to stay healthy, Yao brushed his shoulders off and missed only two games in his first three seasons in the NBA. He then missed a total of 86 games the following three seasons.

Although Yao reported to Rockets camp healthy this season, and he did appear fit during the Olympics, I think there are legitimate long-term concerns about his body’s ability to handle the grind of an 82-game NBA season. His stature illustrates, not surprisingly, a catch 22: his size is a clear advantage in matchups, but that same build takes an undeniable toll on his body. And how does he monitor that?

As basketball fans, we should all be rooting for Yao. After he was diagnosed with a stress fracture in his foot this past season, his oft-reserved emotions cascaded into view. He expressed feelings of failure and felt as if he had let his team and his country down. Though listed as China’s wealthiest athlete, Yao wouldn’t be ballin’ for the bucks; even if he were traded to Milwaukee.

With Ron Artest added to the Rockets’ lineup, 2008-09 is the most important year yet for the legacy Yao will leave. If he’s able to remain healthy and get Houston out of the first round of the playoffs for the first time in his career, history will remember Yao fondly.

On the other hand, if he is forced to once again miss significant time due to injury, there will be enough fodder to validate claims that dueling between the NBA and his commitment to Chinese professional basketball has proven too much for the icon.

I’m not asking you to root for the Rockets, but next time you’re raising your glass, why not toast to Yao’s health? David Stern and 1,321,851,888 Chinese basketball fans will thank you for it.