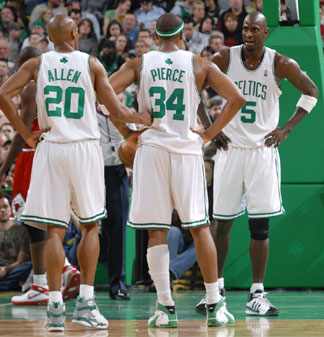 As the Dwight issue trickles across the country, people will be reading our staff’s annual predictions for the Finals. I thought I’d run this year’s as much for entertainment as “expertise.” I make light of it because last season we were a whopping 0-for-8, with six of us picking the Mavs and two picking the Suns. And in ’06, nine people made picks and not a one had the Heat. In our defense, we turn in our picks in mid-March, more than a month before the Playoffs start. There is a little diversity amongst the choices this year; hopefully enough that at least one of us is right. And if we’re not, I’m sure some of you will be quick to remind us.

Ryan Jones, Contributing Editor
Boston Celtics: I said before the season that these Celtics had the potential to be the best in the L, and so it has proven. That doesn’t guarantee anything in the Playoffs, but I still like the way the Cs are rolling. The veteran leadership, offensive balance and team D are all as strong as we thought they could be, the supporting cast surpassed all expectations, and no team is hungrier. Having to get past (most likely) Cleveland and Detroit won’t be easy, but it’s very doable. And then they’ll beat the Lakers in six.

Ben Osborne, Editor-in-Chief
Detroit Pistons: I can’t believe I’m saying this, since they have such a big reason why not leading their team (Flip Saunders), but I’m going with the Dee-troit Pistons. These guys like to say they play angry, but that Bad Boys rep can often be bullshit. In the wake of last year’s LeBronimation, however, the motivation is real. Everyone’s got their contract, everyone seems healthy. Before Sheed and Dice get any older, and before the core gets sick of playing together. For the Pistons, the time is now.

Susan Price, Managing Editor
San Antonio Spurs: When I got into basketball, the only rivalry I knew of was between the Knicks and Bulls, which usually ended badly for my team. I was too young for the ‘80s wars between L.A. and Boston, so I’ve been anticipating the 2K8 version this year. Unfortunately, Kobe won’t be able to will his way past the Spurs. And the Celtics? Sorry, Kevin. I want you to win, but you can’t always get what you want. Spurs in six.

Konate Primus, Editorial Assistant
Boston Celtics: I said Boston will win it all then and I say it now. I’m picking the Lakers to come out of the West because they have so many options: Lamar, Pau, Fisher and KB24. They can post up with the best, run with the fastest and what can’t Kobe do? Will they have enough juice to battle the big three after getting out of the Wild Wild West? No. I’m no psychic, but I’m sure these Finals will bring back feelings from those classic Bird vs. Magic days.

Sam Rubenstein, Online Editor
Los Angeles Lakers: Process of elimination: New Orleans is too young. Dallas desperately brought in the worst shooter ever to a team that can’t hit the big shot. Phoenix? It’ll be good to have Steve Kerr back on TV next year. Golden State plays no D. Houston will be led by Rick Adelman. The Spurs are a logical pick but they never repeat, those chokers. Utah? Could be, but… Phil Jackson running a talented, hungry team with the best player, a star second banana, role players who do their jobs, and it’s a done deal. The East don’t matter.

Khalid Salaam, Senior Editor
San Antonio Spurs: Tim Duncan has never won back-to-back titles, though I doubt that’s much of a bother for a player with four rings and top-10 all-time status. But it does give incentive, and after all the games he’s played, that is something to strive for. Couple that with a career year from Ginobili, a healthy reigning Finals MVP in Parker, Pop’s overwhelming intellect, an old but still nasty supporting cast and the fact that this is the NBA (not the NFL) and I won’t doubt them. Are they beatable? Yep. Are they beatable four times in a series? Nope.

Lang Whitaker, Executive Editor
San Antonio Spurs: What a long, strange season it’s been. Anyone remember Gasol on the Grizzlies? Kidd on the Nets? Someone took the NBA and threw it in a blender, and now nothing is the same. That said, I think one franchise will stick to their plan and grind out a Finals win. The Spurs will beat the Pistons to win the title. And then we’ll party like it’s 2005.