Some Awards From The Weekend 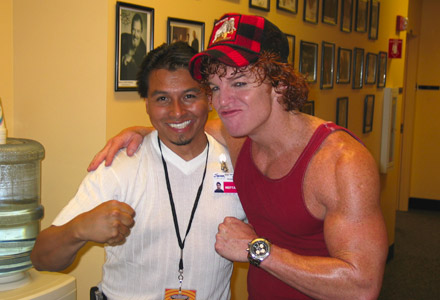 Let’s be honest, last night didn’t really live up to the hype. And if you think about it, how could it have? Most of the guys were probably hung over, sleep-deprived, worried about having caught something that can’t be cured from one of the groupies, and tired of answering the same questions from the media. The majority probably just wanted to hit the craps tables one last time before going back to “work”.

This doesn’t mean the weekend, from a viewer’s perspective, wasn’t riveting. Because it was. Below I’ve compiled some awards for those who made it fun (and painful) to watch.

Seriously, how does the Howard Sticker Jam get anything less than a 50? Most of the public’s wrath was saved for Mike and his ridiculously low scores, but I think ‘Nique got off too easily for not giving D-Howard the score he deserved considering Wilkins’ own forgettable experience with the judges.

Here are two new rules that I think should be instituted, and that would go a long way into making the dunk contest fun again:

1) The judges can only give out scores after having seen the dunk in slow motion replay. Most dunks happen so fast that it’s hard to truly appreciate them upon initial viewing; I know that I usually leap off the couch only after having seen everything twice or three times. There was no way for the judges to appreciate (let alone UNDERSTAND) what Howard had done without a couple of replays. The arena went silent after his dunk, just like it did in Oakland after Vince’s elbow dunk. Most people had no idea what happened initially, least of all the judges.

2) Screw this whole you-have-two-minutes-to-complete-a-dunk nonsense. If you can’t make a dunk in three attempts or less, take a seat. You shouldn’t even be competing.

3) I know I said two rules, but I don’t care: Nate Robinson is no longer allowed to be associated with the dunk contest in any way, shape, or form. Do you realize that he’s the main reason the last two contests have sucked so mightily?

These guys took things to a whole new level this weekend. I’m convinced that one of Sager’s suit jackets this weekend (on Friday I believe) could be seen from outer space. A man should never have that much glitter on his clothing unless his name is Michael Jackson and is still in the 80s.

(Damon Jones wore a maroon-colored jacket while interviewing celebs for NBA TV that made me long for that atrocious bright red jacket and sunglass combo from last year’s ASG.)

Did you see how huge dude is? I’m sorry, but I’m not prepared to live in a world where Carrot Top’s arms are that big. I’m just not.

(Speaking of celebs, how does Adam Sandler get front row seats while Michael Jackson is told to take a hike? So let me get this straight: the guy responsible for “Thriller” is left on the outside looking in, while the one who brought us “Click” is treated like a VIP? Makes perfect sense.)

(While we’re here: I know everyone has mentioned it by now, but Wayne Newton is decidedly creepy. The guy’s face looked it had been left out in the sun for 72 hours. And whoever administers his Botox injections deserves a raise.)

Most Blatant Disregard Of The Laws Of Gravity: Monta Ellis

The guy threw down about seven dunks in the Rookie/Sophomore game, the last of which was absolutely filthy. I hope the League will have the good sense to extend him an invite to the dunk contest next year.

(Vince, Kobe and LeBron also had some nice dunks in the big game on Sunday. I’m now convinced that Vince plays with more desire in All-Star games than he does in certain regular season ones.)

First of all, I had no idea that Darvin was out of the League, much less that he’s now working for NBA TV. However, the guy did a commendable job whenever he was on the air throughout the weekend. He laughed a bit too much (and too hard) for my taste, but he kept the conversation moving along nicely and seemed to have a good rapport with the co-host.

(The announcers who handled the Rookie game were verbally slurping David Lee’s perfect shooting performance, but ignored the fact that he basically scored all of his points on DUNKS AND LAYUPS! Lee’s still my man, though.)

(While we’re dealing with TV personalities, does Kenny Smith’s defeat of Reggie Miller in their annual shootout take a little bit away from Reggie’s legacy? I’m just sayin’.)

The only positive to be taken from Pip’s appearance this weekend is that he’s at least not fat. He certainly didn’t look like someone who is ready to contribute significantly to a playoff contender. Then again, he was probably drunk and sleep-deprived like everyone else, so I shouldn’t be so quick to judge.

(Also, is it just me, or did Pippen look absolutely furious when team Chicago was eliminated for shooting out of turn? I thought he might punch someone in the head for trying to mess with his money.)

Most Obvious Display Of Intensity In An All-Star Setting: Kevin Garnett and Kobe Bryant

I couldn’t help but laugh after KG threw D-Wade’s layup attempt into the stands with extreme prejudice and that trademark scowl of his came out. I don’t think anyone told him this was an exhibition game.

Kobe also came out playing like it was game 7 of the Finals. I don’t think the guy knows how to take a night off. Last night, however, his brand of intensity was necessary. Everyone looked sluggish (especially the Eastern Conference), and were it not for Bryant, LeBron, Garnett and Amare playing hard, it could have easily turned into one of the worst All-Star games ever.

(This whole Kobe vs. LeBron rivalry seems to have some legs. They’ve now faced off three times this season, and each time there have been some great mano-a-mano battles. Call it a hunch, but I don’t think the NBA would mind a Lakers/Cavs finals too much.)

(This doesn’t qualify as an “intense” moment per se, but it’s too good not to be mentioned: T-Mac’s God Shamgod crossover early in the fourth quarter was nicely executed and completely fooled the defender. It’s too bad he couldn’t knock down the jumper.)

Best Use Of A Television Camera: TNT during Toni Braxton’s halftime set

Any time a television network positions their main camera directly in front of Toni’s crotch and thighs for the majority of her performance, I’m happy. Very happy.

Best Moment Of The Weekend: Push

It’s really hard to decide between the Shaq/LeBron/Howard dance off at the end of practice on Saturday afternoon, and the Bavetta/Barkley footrace later that night for the weekend’s greatest moment. So, I’m going to cop out and call it a tie. Both were hilarious, good-natured affairs that showed why the NBA is the most entertaining and self-aware of all the major leagues. Let’s see two people from the NFL lock lips on national television.

(Despite Shaq telling the Washington Post that he expects Kobe, LeBron or Wade to take his place as the League’s greatest personality, my money is on Dwight Howard. While some are getting tired of Gilbert’s act, I simply don’t see how anyone can’t enjoy Young Dwight at all times. It’s his world now.)