Some good news in Boston? 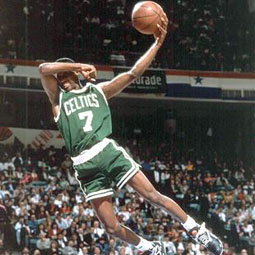 Being a Boston Celtics fan right now is an unwanted occupation. While the Red Sox are in first place and the Patriots are the Super Bowl favorites for next year, it’s the Celtics that are causing some Boston fans to head to the local bar (or bahh in Boston) and drink themselves into oblivion. Yet at a time—after landing neither of the first two picks in the draft—when depression amongst the “Green” faithful is common, it was at a local Bodega where fans were able to remember the legacy while also witnessing the coming together of two different generations of Celtics players in Dee Brown and Gerald Green. Our Boston affiliate, Sammy Newman-Beck, was on the scene and able to catch up with the two players.

Just when you think things can’t get any worse for the Boston Celtics, they do. This past Wednesday at the local Bodega in Boston, one former Celtic player and one current Celtic player were hanging out, relaxing and eating sausages. But, before you jump to any conclusions, this Bodega is not actually a bodega in one sense—you walk into a store which looks exactly like a bodega but under further inspection you see there is a secret door leading to the back.

At Bodega (which is the name of the high end sneaker boutique) this past week, former Celtic legend Dee Brown and current dunk champion Gerald Green were in attendance to promote their new R.F. Collection sneakers by Reebok. The collection—inspired by poker playing cards—amongst other colorful kicks graced the mahogany walls of the store, while people ranging from their late teens to early 60’s took in the event.

“This event wouldn’t have happened if Dee Brown and Gerald Green hadn’t won the dunk contest,” said Oliver Mak, co-owner of the downtown located Bodega. “Reebok reached out to us and we decided we should celebrate. Maybe, we should point out the legacy of Boston and the Celtics and what they have accomplished here”. This legacy of the Celtics—while forgotten to many ( 11 championships in 13 years in the 50’s and 60’s, 3 championships in the Bird era of the 80’s and the most titles all time of any team in the NBA just in case you forgot) —re-emerged at Bodega last week with classic Dee Brown pictures hanging from the walls as well as a special guest appearance from 8 year Celtic veteran Walter McCarty.

“Dee was the first one to win it with the Celtics,” said Green in regards to Dee’s 1991 dunk championship. “He’s been a Celtic, and I just wanted to show him that much respect”. Gerald paid Dee that respect by replicating his 1991 “eyes closed” winning dunk while wearing the same exact “pumps” that Brown wore 16 years ago” While Gerald–a great talent, with unlimited upside and a crazy vertical leap —who averaged 10.4 ppg, 2.4 rpg, 1apg—was happy that he won this year’s contest, he is also looking ahead to his own future with the Celtics. “I want to be a totally different player next year. That’s my goal. I want to come back and be more effective for my team and hopefully earn more minutes”.

With recent trade rumors swirling around the Celtics and specifically Gerald, the fans in attendance left him feeling confident. While he signed autographs and posed for pictures, numerous fans expressed their hopefulness of his lengthy future with the Celtics. Gerald who was not fazed by these trade rumors, has also heard the current criticisms like the media claiming he is nothing more than a “dunker”. When asked about these kinds or stereotypes, the 21-year old responded like a 10 year veteran.

“I don’t respond to those stereotypes. I just go out and work on my game everyday,” said Gerald, as kids gathered around the young phenom. “Even if someone labels me as a three point shooter I still go out there and work on my game everyday. Everybody has an opinion. What I got to do is go out there, work hard everyday, be dedicated and try to win as many games as I can.”

Dee Brown–a twelve year NBA veteran from 1990-2002–won the dunk contest in 1991 beating out favored high-flyer Shawn Kemp. Brown, who spent 8 years with the Celtics, and may be more famous for his innovative left handed circus dunk then for his efforts as a combo guard, has gone through the stereotypes you can receive as a renowned dunker and had some expert advice for Green.

“The thing I told Gerald,” said Brown after addressing the crowd, “is just do what you do. If you’re gonna dunk on someone, then dunk on them. Don’t change your game, be an athlete. Don’t get caught up in trying to showcase for the crowd. I remember after I won the dunk contest somebody said that I was just a dunker. So, on a fast break layup I laid the ball up and the crowd booed me till no end. I remembered that, and I said ‘I’m a do what I do’ and if I feel like I need to dunk the ball then I’m a dunk it and if I feel like I need to lay it up then I’ll lay it up.”

With the Celtics finishing this past year with the 2nd worst record in the league it is no question they need help. With the draft only days away it is obvious that many here in Boston are skeptical. It wasn’t too long ago that Kedrick Brown, a high flyer in his own right, and Joesph Forte were selected by the Celts. But the Celtics have to get better right? While the diehard fans agonize over this Thursday’s draft, something can be said for the glimpses of brightness that were seen at Bodega that night. Even though the Celtics may be looking gray for now, their players still shine.