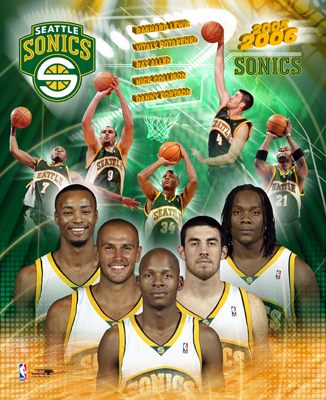 Paul Merrill from Supersonicsoul was kind enough to help us preview his team, the Seattle Sonics.

SLAM: What’s the mood in Seattle right now after the news of the team being sold?

PM: Since Clay “Oklahoma Sonics” Bennett bought the team two months ago, Sonics fans have been going through the five stages of death. I’m not sure what all the stages are, but I think two of them are anger and heavy drinking. Bennett claims he’s going to try his best to keep the team in town, and we’ve been working with a great group of people over at SaveOurSonics.org to make sure he keeps his word.

There have been rumors that Rashard Lewis isn’t happy in Seattle. Has
management done enough to keep him in green and gold?

I’m not sure if management should keep him in green and gold. As much as I love ‘The Rash’, he’s never lived up to his potential. One night he’ll drop 40 on you, the next he’s the invisible man. He’s like a modern day Derrick McKey–so much talent, so little drive.

Danny Fortson plays for your team. How do you cope?

Is Bob Hill the right man for the job? How much can he get out of this team?

I think Bob Hill might be the only man for the job. After the disastrous “Weiss Guy” experiment, he came in last year and did some much-needed butt kicking. Not only did he help Chris Wilcox become a consistent double-double threat, he did the unthinkable: he made Robert Swift look like a basketball player. Also, he drinks and swears a lot, which always endears a coach to me.

Alright, enough foreplay, how will the Sonics do this season?

Two years ago, we picked the Sonics to be 8th seed in the west–they ended up being one of the best teams in the league. Last year, we picked them to win the division–they ended up in the lottery. Obviously, our predictions mean nothing…so let’s say the Sonics are going to win it all and Chris Wilcox will be MVP!