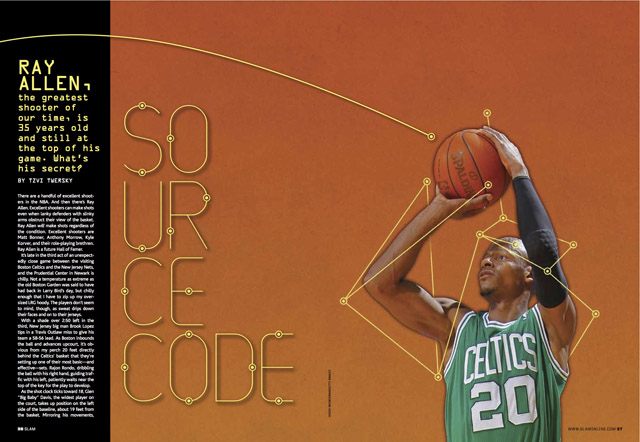 It’s late in the third act of an unexpectedly close game between the visiting Boston Celtics and the New Jersey Nets, and the Prudential Center in Newark is chilly. Not a temperature as extreme as the old Boston Garden was said to have had back in Larry Bird’s day, but chilly enough that I have to zip up my oversized LRG hoody. The players don’t seem to mind, though, as sweat drips down their faces and on to their jerseys.

With a shade over 2:50 left in the third, New Jersey big man Brook Lopez tips in a Travis Outlaw miss to give his team a 58-56 lead. As Boston inbounds the ball and advances upcourt, it’s obvious from my perch 20 feet directly behind the Celtics’ basket that they’re setting up one of their most basic—and effective—sets. Rajon Rondo, dribbling the ball with his right hand, guiding traffic with his left, patiently waits near the top of the key for the play to develop.

As the shot clock ticks toward 18, Glen “Big Baby” Davis, the widest player on the court, takes up position on the left side of the baseline, about 19 feet from the basket. Mirroring his movements, center Troy Murphy sets up in the same location on the right baseline. Jeff Green sits just behind the three-point line on the right wing. Ray Allen, blanketed by Sundiata Gaines, occupies the same position as Green except on the opposite side, near Davis.

17. All five Celtics hold their position.

16. Rajon Rondo takes one last dribble in place, and everything begins to simultaneously unfold. Ray Allen feigns a dive to the corner and Gaines follows his lead, not giving up an inch. In mid-step, though, Allen reverses course and makes a move toward the rim, where Davis lies in wait. Unable to avoid the imposing Baby, Gaines runs smack into him as Allen continues along the baseline. Unflustered by the momentary setback, Gaines gains on Allen, catching up to him under the basket.

15. Eyeing the movement, Green moves along the free-throw line, taking his defender away from the incoming shooting guard, and toward the wing Allen vacated a second prior. Meanwhile, now running at full speed, Allen maintains his course along the baseline, where he rubs off Murphy and makes a V-cut to the opposite wing.

14. Sundiata Gaines cannot get around the screening Murphy. Travis Outlaw, Murphy’s defender, is slow running out to the three-point line to pick up the open Allen.

13. Rajon Rondo delivers a perfect chest pass to Allen, who sets his feet, squares his shoulders, spreads his fingers and pops his wrist.

12. The ball rotates high in the air, and before the shot reaches its destination, I look away. I look away because, having watched Ray Allen play for almost 15 NBA seasons now, I know what the result is likely going to be. I look away because Allen told me, “I’m only surprised when I miss. When it doesn’t go in I’m like, How did that happen?! I don’t get it. And truly I mean that. I only question the misses. Even if I shoot a halfcourt shot, I feel like I’ve got a great chance of making it.”

11. Swish. Boston has reclaimed the lead, 59-58. Ray has hit his 2,593rd career three. All is momentarily right in an otherwise topsy-turvy world.

Ray Allen’s jump shot is sweeter than high fructose corn syrup, and just as deadly. The question is, Why? Why is his shot greater than all other shots? And, what’s the secret behind his success?

“That’s an excellent question,” says Karl Hobbs, George Washington University’s current head coach and the man Ray Allen credits for helping him polish his stroke while at UConn. “I really think it’s all in his wrist and the extension he gets on his shot. And he’s always relaxed on his shot. He never really rushes his shot.”

While Allen certainly doesn’t disagree with the man who had him study Hersey Hawkins game tape throughout his stay in Storrs, CT, he thinks his career shooting percentage of 45 (40 from behind the three-point line) has more to do with his legs. “The lower body is the most important,” says the 10-time All-Star. “The upper body is kind of like non-existent if your lower body is doing what it’s supposed to do. If you’ve got great legs on your shot, it’s always going to have a shot to go in.”

While there may be a slight difference of opinion when it comes to dissecting the physical reasons behind his shooting prowess, the leg on which Ray Allen’s greatness stands is as evident as the CITGO sign looming over Fenway Park: It’s his work ethic.

According to Boston coach Doc Rivers, even on the day after a game where he played 40-plus minutes, Allen will hit the Celtics’ facility in Waltham, MA, hours prior to the start of practice. After carefully changing into his ball gear—if Allen had a hair on his head, it would never be out of place; his nature is that meticulous—he begins his workout by running on the treadmill for 60 minutes. He then makes his way down to the court, where he matriculates from location to location, taking 300 or more shots. Then his teammates arrive and practice begins.

“It’s just his warm-up, and for most people that’s their practice,” says Rivers reverentially during a quiet moment before the March game in Newark. “That is why he is who he is.”

Who is Ray Allen exactly? He’s 15 seasons of 20 points, 4 rebounds, 3 assists and 2 threes a game. He is, according to many NBA players past and present, one of the greatest shooters to ever lay hands on a Spalding. He is, according to the stats, the greatest three-point shooter of all time. He is the perfect citizen, the epitome of cool and the very definition of consistent greatness.

Yet, at 35 years of age, he still practices like the scrawny freshman at UConn he was half a lifetime ago. And that is the not-so-secret ingredient behind his jumper’s serenity and his career’s longevity.

“I don’t take credit or praise for being able to shoot the basketball, because I do it so much,” says Allen. “Pat me on the back. Tell me I’m great. But get in the gym with me and you’ll be like, ‘I’ve watched him work out, so I really expect that to go in.’”

Coach Hobbs, observer of almost two decades of Ray Allen hoops, says that you can never tell what kind of game Allen is having based on his ever-neutral facial expression.

Consider February 10, 2011 the exception. After three days and two nights sitting on the precipice of Reggie Miller’s record for all-time three-pointers made (2,560), three days and two nights of answering an abundance of questions about it, Allen arrived at TD Banknorth Garden one three short of tying and two short of breaking the record. He’d accomplish both in the first quarter, showing a hint of emotion after No. 2,560, and a full array after the record-breaker.

Backpedaling down the court after draining No. 2561 over Derek Fisher, Allen pumped his fists—seemingly still trying to keep his emotions in check. He followed that by clapping emphatically. With the crowd noise rising to an NBA Finals-esque crescendo, Allen gave the masses a thumbs-up. Then, he exhaled…and started cheesin’ from cheek to cheek. Finally, Allen went over to Reggie Miller, who was on the sidelines calling the game for TNT, and gave him a handshake and an awkward but obviously heartfelt hug.

Moments later, after re-adjusting his headset, Miller would note on national TV: “I’m so happy for him, because this is one of the best guys. He is so humble. He’s so giving. He’s a great family man.”

What Reggie Miller was trying to say, and what Ray Allen’s hug attests to, is that Allen is nothing if not gracious. Coach Hobbs knows this from his days working him out on the practice floor at UConn, where a young Allen would always make sure to say, “Thanks, Coach,” before heading to the locker room. I know this from how giving he was with his time—be it on an off-day phone call or after a tough, late-season loss in Newark.

That 88-79 loss to the Nets did irk Allen, though. Because if there’s one thing he cares about almost as much as people, it’s winning.

“A lot of guys in the NBA talk about wanting to win, but they don’t want to win on the team’s terms—they want to win on their own terms,” says Allen. “People talk about it, but they don’t really know what it means to really go about winning. It’s just talk. I’ve been fortunate to meet up with some players and an organization that really wants to win.”

Not satiated with the title he won in 2008, after re-upping for two more years with the Celtics this past summer, Allen spent copious amounts of time in the gym, preparing for another run at the championship.

The work paid off. The 35-year-old had one of his finest season since coming over to Boston in ’07. He’s averaging 16.5 points, shot career-bests of 49 percent from the field and 44 percent from downtown. More importantly, the Celtics finished third in the Eastern Conference.

“He’s gotten better with age,” says Hobbs, who watches the Celtics on TV frequently. “That’s a tribute to how he keeps his body and mind in great condition.”

Though he’d only been a Celtic for four games, Carlos Arroyo thinks he knows the root of Allen’s continued production at an age when most jump shooters are relegated to the bench or the YMCA. “We want to drink some of that water,” says Arroyo of the fountain of youth Allen seems to have discovered. “Whatever he’s drinking, we want some.”

Arroyo’s just finding out what most people already know.

There are excellent shooters. And then there’s Ray Allen.