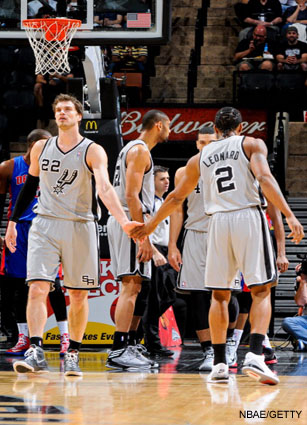 Pete Walsh is taking the night off to catch up on Girls, so I’m subbing in for the Monday Post Up. Last night, the Spurs role players ignited a win against the Thunder and the Warriors dominated the Knicks. No nail-biters, but some interesting stories anyway. Let’s get to it.

76ers (24-39) 106, Nets (37-27) 97
Dorrell Wright got hot in the second quarter last night, helping the Sixers control a seven-point halftime lead. The two teams played even in the third quarter as Deron Williams heated up for Brooklyn. The Nets were within five a few times in the mid-fourth quarter, but Philly held them off in the final six minutes.

Wright finished with 15 off the bench for Philadelphia. Spencer Hawes blew up for 24 points to go along with 10 boards, 7 dimes and 2 blocks. Jrue Holiday and Thaddeus Young also double-doubled for Philly. The team as a whole shot over 53 percent from deep.

Brook Lopez had a strong first half for the Nets but was silent in the final two quarters. He finished with 19 points. Deron scored 27 with 13 dimes, and Joe Johnson added 20. Gerald Wallace continued his statistically embarrassing season with 4 points, 1 rebound and 1 assist.

I like him as a tough glue guy who will be able to handle challenging defensive matchups in the Playoffs, but his lack of offense this year has been wild. He’s averaging 8.4 points on just over 40 percent shooting from the floor in the first year of a 4-year, $40 million deal. He’d be a major problem if Brooklyn wasn’t owned by this guy. Kris Humphries played as many minutes as your niece on a coach’s decision last night. His $12 million annual price tag might also be an issue if not for this guy.

Spurs (49-15) 105, Thunder (47-17) 93
This was a big game. The clear-cut two best teams in the West came into the night a game apart in the standings, with San Antonio having the leg-up on OKC. The Thunder could have evened things up, but instead fell two games behind. I think we’ll see these two teams in the Western Conference Finals, and the Spurs might get home court advantage because of Monday’s win.

The Thunder led by 10 after the first quarter, but were outscored 35-18 in the second and trailed going into the break. Tiago Splitter, Kawhi Leonard, Danny Green and Gary Neal were the sparks for San Antonio’s run.

The Spurs, who were again without Tony Parker, were able to open up an 18-point lead after a 9-0 run to start the fourth, and the Thunder never got back in the game.

Splitter led the Spurs in scoring and rebounding with 21 and 10. Leonard added 17 and Green scored 16. The Spurs can rely on different guys on any night, and it seems like Coach Pop gives the right players the perfect amount of minutes every game. I don’t know how he does it, but they’re my pick to win it all.

OKC got 26 from Kevin Durant, 25 from Russell Westbrook and a double-double from Serge Ibaka, but only 9 from Kevin Martin and the team committed 19 turnovers.

Jazz (33-31) 103, Pistons (23-43) 90
Utah pulled away in the second quarter and sealed the game with a strong fourth. The Jazz were led by Mo Williams (20), Al Jefferson (16 and 10) and strong play from their second unit. Marvin Williams, Enes Kanter and Gordon Hayward each came off the bench for at least 13.

Detroit had six guys in double-figures, but nobody scored more than 15. Despite Greg Monroe’s 13 boards, they lost by 17 on the glass. That’s an ugly, ugly stat.

Nuggets (43-22) 108, Suns (22-42) 93
Denver’s offense rolled right through Phoenix last night. The team shot over 51 percent from the floor, but got big contributions from unusual places. Kosta Koufos led the team with 22 points and Corey Brewer dropped 20. It’ll be tough to beat Denver if those two each score 20+. Thankfully for the rest of the League, it’ll probably never happen again.

Ty Lawson added 19 and Kenneth Faried narrowly missed a double-double. I can’t decide what to make of the Nuggets. Sometimes I talk myself into thinking that they can create a sneaky nightmare Playoff matchup for a veteran team that can’t catch their breath in Denver while Lawson & Co. endlessly run up and down the court.

More often, I’m of the opinion that they have too much depth and not enough star power. Danilo Gallinari is surprisingly unreliable, Andre Iguodala’s offense disappears in a flash and it’s not clear that Lawson can run a real half court offense. I like the players themselves and hope they do well, but I’m still not sold.

Phoenix trailed by just six entering the fourth before letting Denver pull away. Wes Johnson led the team with 18. In his last 7 games, he’s scored 14, 8, 15, 5, 19, 5 and 18 points. That’s comical inconsistency, but at least he’s showing some signs of life after flopping miserably over his first 2+ years in the League. He’s certainly on a team that can afford to give him minutes while he tries to find his stride. Newcomers Marcus Morris (16) and Hamed Haddadi (13 and 8 ) were productive in the loss.

New York simply got blown out in Golden State, combining for 21 points between the second and fourth quarters. The dinged up Carmelo Anthony shot 4/15. Tyson Chandler attempted just 2 shots. Iman Shumpert made only 3/9 attempts with no assists or rebounds. JR Smith shot 3/11 before getting ejected. Jason Kidd was 0/3. Steve Novak was 0/6. Ouch.

It’s a nightmare start to the Knicks’ west coast road trip, which will send them to Denver, Portland, Los Angeles (Clippers) and Utah over the next week. They lead the Pacers by only one game in the loss column and teams like Chicago, Brooklyn and Boston by four or five losses. Things could quickly get dicey if Melo’s as banged up as it looks.

This was also a big win for the Warriors. Curry led the way with 26, David Lee went for 21 and 10 and Klay Thompson dropped 23. Andrew Bogut and Festus Ezeli totaled 21 boards. That’s a great formula for a Golden State win.

After a hot first half of the season, Mark Jackson’s club has started to slip a little. They would be the sixth seed if the Playoffs started tomorrow, but, of course, it doesn’t. The Lakers, currently the 9th seed, trail Golden State by just two losses. I think the Jazz will fall out of the postseason and the Rockets, Warriors and Lakers will round out the bottom of the Conference.