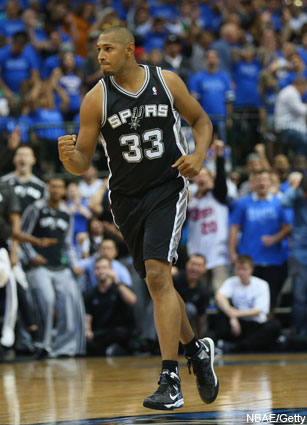 Returning home after a momentous Game 4 win, the Indiana Pacers’ offense was full of motion in the opening minutes of Game 5. And even though Indy’s offense slumped throughout the rest of the first quarter, Frank Vogel’s defense reverted back to its stifling ways of November and December, forcing 5 Atlanta turnovers.

With that, Indy held on to a 1-point lead after the opening stanza, despite the Hawks shooting 50 percent from the field. But that cushion would quickly evaporate.

After Shelvin Mack knocked down a free throw to tie the game at 21, Hawks forward Mike Scott opened the second quarter with four-straight threes to help Atlanta start the frame on a 13-0 run. From there, Atlanta cruised to intermission, outscoring Indy 41-19 in the second to take a whopping 21-point lead back into the locker room. The Hawks exploded from downtown, drilling 9 three-pointers in the quarter, with 5 coming from Scott alone. The big man scored all 17 of his points in the second quarter, and Mack would go on to lead the Hawks in scoring with 20.

Indiana kept pace with the Hawks in the third quarter, but that came mostly without Roy Hibbert. After picking up his fourth foul with 8:44 remaining in the period and his team trailing by 20, the struggling former Hoya hit the pine and never returned to the court.

Hibbert did get to watch his teammates forge a last-minute comeback in the final 12 minutes, however. Looking to infuse some life into his dilapidated team, Vogel put in little-used Chris Copeland and the former Knick knocked down two-straight three-pointers to open up the quarter and get the ball rolling for Indy offensively. Next, it was C.J. Watson who came alive for the Pacers, scoring 8-straight points. David West then scored a bucket and the Pacers dwindled Atlanta’s lead down to 11 points.

After an official timeout, West drove in for a layup and Watson followed up with a drive of his own. The lead was improbably down to just single digits and Bankerslife Fieldhouse was alive and roaring…

…Until Kyle Korver immediately responded, draining a 27-foot triple with 3:43 remaining and regaining Atlanta’s 12-point lead. Paul Millsap dropped in a big 20-footer to counter Paul George’s two late threes and Atlanta held on to take a crucial 3-2 lead in the series with Game 6 coming up in the ATL.

On the game, the Hawks had 6 players score in double figures and Lou Williams chipped in 8 points off the bench. Atlanta’s offense just has such terrific spacing with nearly every player on the roster owning three-point range. George lead Indy with 26-12-6 and 6 steals, but the Pacers’ overall team effort is obviously lacking. Look for Copeland to get earlier minutes on Thursday with the Pacers facing elimination. Honestly, expect Vogel to pull every last trick he’s got left in his hat to try and find a winning combination for this troubled No. 1 seed.—Jake Fischer

Everyone knew it was coming, the Heat run that would make the Bobcats nothing more than a memory. After a tight first half, the run came, a barrage of three-pointers and contested jumpers midway through the third quarter that Charlotte had no hope of stopping. Everything went just as expected, with the Heat finishing off a sweep against their overmatched opponents, except for one thing.

In their final game as the Bobcats, the soon-to-be Hornets didn’t fold, even with Al Jefferson wearing suit on the bench. Yeah, Miami piled up a 13-point lead on two occasions after the midpoint of the third. But Charlotte didn’t go away. When Erik Spoelstra left LeBron James (31 points, 10-19 shooting, 7 rebounds, 9 assists) in the game to start the fourth quarter, it sure seemed like Miami was intent on hammering the Bobcats into the ground and out of existence. But Kemba Walker (29 points, 11-15 shooting) wasn’t ready to go fishing, splashing in a triple after Miami pushed the lead back to 13. Josh McRoberts wanted one more chance to deliver a hard foul or two, getting to the line and then picking up an assist. Charlotte worked the lead down to 99-92.

In the end, Miami was too much. Chris Bosh (17 points, 7-12 shooting, 8 rebounds), the most secretly clutch player in the League, knocked down two jumpers to basically end Charlotte’s season.

The Heat took control of the game right around the time LeBron took a knee to the thigh. He came right back and drilled a 3-pointer, following that up with a long two and a dunk. Then the long balls started falling around the four-time MVP; Ray Allen (3 points), James Jones (9 points) and Norris Cole (13 points) all knocked down shots from deep after Bron’s injury to give the Heat the lead for good. James got a boost of adrenaline from the ding he took, pouring in 19 of his points while hobbling around, playing the rest of the way.

Walker got off to a hot start for the ‘Cats, scoring 10 of their first 12 points as they swapped leads with the Heat throughout the first half, riding the emotional high of facing elimination without their best player. Miami handled that opening salvo, never letting the Bobcats get ahead by more than 5 points in the opening half. The ‘Cats got 17 points from midseason acquisition Gary Neal, and Chris Douglas-Roberts had a perfect shooting night and finished with 14 points.

The Heat, who got 15 from Dwyane Wade and 10 from Mario Chalmers, will get some rest as they wait for the winner of the bruising Brooklyn-Toronto series. LeBron’s dead leg doesn’t seem so bad, looking at that, does it?—Brett Weisband

The Mavs and Spurs have given fans some fantastic, drama-filled Playoff series this millennium. And like the 2006 matchup, this one has consisted of a close Game 1, 3 and 4 with a blowout in Game 2. Unlike 2006, though, an unlikely hero stepped into a 3-pointer and knocked it down to tie the series.

Boris Diaw (17 points, 4 rebounds, 4 assists) not only had his best game of the series but also made his biggest shot of the series to stop the Mavs’ blitz of a comeback. The point-guard-turned-power-forward hit a 3-pointer to give the Spurs a 90-87 lead with 32.7 seconds left. He took it to Dirk Nowitzki (19 points, 7 rebounds) all night with his ability to stretch the floor with the long ball and use his post moves down low.

After a Dirk putback and some split free throws by Ginobili, the Mavs trailed 91-89 with 10.4 seconds left. Monta Ellis (20 points, 6-20 from the field), who had yet another big fourth quarter, converted an and-one the play before Diaw’s 3-pointer. After Diaw was switched onto him after the inbounds pass, Ellis drove right to the hole and was tantalizingly close to converting the layup. Just as the Spurs were 1.7 seconds away from victory in Game 3, the Mavs seemed to be 1.7 inches away from sending Game 4 into overtime. Even though this series is currently 2-2, it feels as though the Mavs could have swept the Spurs by now while the Spurs could be up 3-1.

The defending Western Conference champions would not be in this series without the play from their current best player—Manu Ginbobili (23 points, 5 assists). Ginobili and Ellis have been the catalysts for their respective offenses, being the two best players through four games. Even though Ginobili sometimes uses flopping to his advantage, the Argentinian knows how to get to the rim and free throw line. Monday night, with Ginobili on the floor, the Spurs scored 117.6 points per 100 possessions. Without Ginobili? Only 69.7 points per 100 possessions. That says it all.

The first half showcased a Dallas team that hasn’t been present up to this point in the series. The Mavs trailed by 14 and only put up 36 points—easily their worst half so far.

“I was so disappointed with our no-show in the first half that it’s hard for me to mitigate it with fighting for 24 minutes out of 48 minutes in a game with this kind of meaning,” Carlisle said.

A few minutes into the second half, it only got worse as San Antonio took hold of a commanding 58-38 lead. This team was able to build such a large lead thanks to guard play from Tony Parker (10 points, 3 assists) and Patty Mills (10 points, 2 steals, 3-5 from the field).

Along with Ginobili, Mills has been a fantastic offensive punch for the Spurs this season. But going into Game 4, Mills had only scored 12 points on 4-16 shooting through three games. He looked much more comfortable Monday and will need to continue to help the Big 3 in terms of scoring.

The Mavs, though, fought back quickly thanks to a spark from DeJuan Blair (12 points, 11 rebounds, 2 steals, 16 minutes). At one point, the big man had 10 points and 10 rebounds in 10 minutes. He was bulldozing his way up and down the court, using his energy to impact the game. During a one minute stretch from 9:50 to 8:45 in the fourth quarter, Blair gobbled up four rebounds and topped it off with a bucket to cut the deficit to 75-71. A few minutes later, it was all knotted up 77-77.

Blair, though, ended up being just as much of a detriment due to a kick to the head of Tiago Splitter (10 points, 12 rebounds) at the 3:08 mark. Whether or not it was intentional, Blair’s technical foul and ejection gave the Spurs three free throws, which they knocked down to take an 85-83 lead. They wouldn’t give up the lead the rest of the way thanks to even more made free throws. San Antonio got into the bonus at the 5:06 mark, allowing the team to get to the stripe and make enough free ones down the stretch to set Diaw up for a big shot and withstand the Mavs’ furious comeback.

Even though Dallas rallied to make this one a game and brought back some of its confidence as the team travels back to San Antonio, the Mavs simply need more from Devin Harris (4 points, 4 assists) and Vince Carter (8 points, 5 assists, 2-9 from the field). Whether it be a single shot or consistent play, these two have made Dallas’ second unit just as potent as the starting lineup. They’ll need to find their touch again if they want to take back homecourt advantage in this now best-of-3 series.

With the win, the Spurs won their 187th playoff game, passing the Knicks for fifth in NBA history. Even though the franchise was formed almost 30 years after New York, the Spurs have truly shown what greatness can look like in a short span.—Jay Wallis