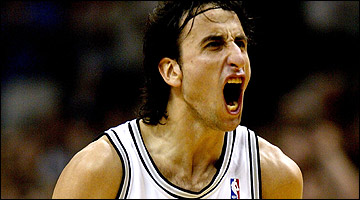 Can you believe that the regular season is only four days away? That’s right, only four days away from the League’s 61st year. Before that jumps off, some of the best hoop writers from around the web would like to say a thing or two about their respective teams, and we’re more than happy to give them the floor.

Michael Rapp (aka Brickowski) from Free Darko was kind enough to helps us preview the San Antonio Spurs.

SLAM: Gregg Popovich is a vastly underrated coach in this league. Aside from his 2003 Coach of the Year win, he doesn’t get a lot of hype. Why is that?

MR: HYPE? In San Antonio? I doubt it. The rest of the country seems happy to ignore the Spurs and the Spurs are more than happy to be ignored. As a Spurs fan, it is occasionally frustrating to have everyone dismiss your team as “boring,” but I’ve learned to accept it as jealous hating on a small market that forces itself upon the national scene every June. Before the Spurs won a title they were called “soft.” After they won the media had to find a new derisive label so the Spurs got slapped with “boring,” and the title stuck even after they added a teenage Parisian blur, and an enigmatic Argentinean lefty who wouldn’t think twice about going behind his back, in traffic, in the final minute of the Western Conference Finals.

I understand that Tim Duncan gives short and simple answers to the press and generally keeps a low profile off the court. That must mean that both Duncan and his team are boring, right? It couldn’t possibly mean that Duncan is smart enough to see the perils of fame and the media and decide he’d rather avoid the trouble, could it? Because I’m convinced that Duncan is simply following the philosophy of a wise man who once said “No jewels, no rocks, it’s not worth the spotlight” (now, that same wise man also liked to wear a Versace plate medallion and brightly dyed Wallabees, but I think the point still stands).

As a society, I think we’re too hard on athletes, especially black athletes. We’re too quick to pigeonhole them with simple one-word adjectives and dismiss them, rather than admit that they might be complex adults with more depth of character than they care to reveal to a national audience. So Duncan is “boring,” and Gilbert is “crazy.” Great.

Now, having said ALL OF THAT, I must confess that I do not agree with the notion that Pop is underrated. I can’t remember the last time I heard anyone criticize his coaching, and they typically hand the COY to a different guy every year. Unless I am mistaken, Hubie Brown was the last coach to win the award more than once, and he had to wait 26 years between trophies.

How do the Spurs continually acquire talented guys, and yet manage to keep everyone’s egos in check?

It is the inevitable result of the Duncan/Pop combination. It has been said a thousand times before, but Duncan has always accepted criticism and that essentially forces everyone else on the team to accept criticism. I think Pop decided when he took over for Bob Hill that he was going to run the team his way and wasn’t going to make any exceptions or treat certain players differently. He made Tony Parker a whipping boy for his first two years in the league, and has shuffled Manu in and out of the starting lineup for the last few seasons. When stars buy into the concept, it allows the Spurs to take a chance on a Stephen Jackson or Glenn Robinson.

To some extent, though, I think it’s funny that we’re even talking about this. People like to note Pop’s Air Force background, and act like the Spurs success is the result of military discipline, but is it really that surprising that a coach has control over his team?. Has professional coaching really fallen this far?

Where would you rank Manu in the echelon of great players today?

Ehh, at the risk of being banned from my hometown, I would probably have to rank him between 40th and 50th in the league, whatever that means. If you had asked me the same question after the 2005 playoffs, though, I would have ranked him in the top 15. At this point, I have resigned myself to the fact that Manu will consistently be injured, and that his fearlessness/recklessness is as much of a curse as it is a blessing. I think the Spurs would looking for a threepeat this season but for Manu’s inexcusable foul on Dirk at the end of regulation in Game 7 against Dallas. Manu is now 29 years old, and it’s not unreasonable to think his best years are already behind him.

Alright, enough foreplay, how will the Spurs fare this season?

For years the Spurs have been at the forefront of the Euro invasion. Pop and company pretty much invented the ‘draft and stash’ game, taking unheard of foreigners late in the first and second round and leaving them overseas to develop. This season should signal the beginning of a departure from that movement for the Spurs. The rest of the league has caught up in the overseas scouting department, and there isn’t the same kind of value to be found. The Spurs opted out of the draft, put an end to the Rasho experiment, and chose not to bring over either Luis “The Tower from Buenos Aires” Scola, last year’s Spanish League MVP, or Robertas Javtokas, a Lithuanian big man who is considered by some to be the best defensive center in Europe.

Fortunately for Spurs fans, however, Pop and Buford seem to have stumbled upon another strategy that exploits market inefficiencies. I like to call it “Stealing from Isiah.” Recognizing that the Knicks were over the salary cap and had close to $70 million invested in Eddy Curry’s Bad Heart and Jerome “Big Snacks” James, the Spurs extended a three-year $7 million offer to 21 year old center Jackie Butler. Butler has tons of potential and his signing has me thinking of Stephen Jackson. Like Jax, Butler is a former McDonald’s All-American who spent time in the CBA and had something of a questionable rep before arriving in San Antonio (nobody know how to treat a lady quite like J-Butt). Butler’s pickup, along with the signing of Fransico Elson, has allowed the Spurs to get younger and more athletic (a priority in the wake of the loss to the Mavs) at a fraction of the cost they were paying for Rasho and Nazr. It looks like Fabricio Oberto, perhaps bolstered by the announcement that he LOVES Nirvana and Pearl Jam, will be the starting center on opening night. However, I expect Elson to take the spot shortly, with Butler possibly taking over late in the year if he can shed some pounds.

Many preseason polls are writing the Spurs off for being too old, but I think it’s worth noting that Tony Parker is 24 and Duncan went for 41 and 15 in the last NBA game he played. Look for Parker to continue to improve and cement his All-Star status. Plus, while the Spurs have never repeated as champs they have historically done very well after relinquishing their title, and openly prefer to play the role of underdog. I see them winning 58+ games in the regular season, and see it again coming down to a battle with the Mavs. Was the Maverick victory last year an aberration, or have they conquered Duncan once and for all? The answer to this question will determine who hoists the Larry O’Brien come June.