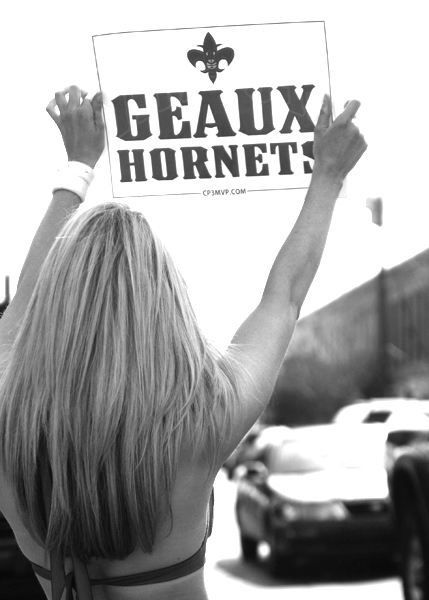 I said there would be a follow-up to this and here it is. Last week, I was at another photo shoot with Stacey, one of the New Orleans Hornets’ Honeybees. Stacey was selected by a vote of SLAM staffers over another Honeybee (who will remain nameless) and although not every potential candidate ran in the election, I think the people will be happy with the choice.

Stacey is 24, a native of the Crescent City’s Westbank and a former cheerleader for the Saints. Her day job is working as a marketing coordinator for a law firm downtown and her night job is–um, riling up–the crowd in the Hive. In this, her first year as a Honeybee, the team has obviously experienced a ton of success–such as the recent first-round series win over Dallas–and as a local, Stacey is just as excited as the rest of the city.

“It’s pretty unbelievable. Everybody I know is following them a lot more now,” she told me after the team’s Game 2 win over the Mavs. “It’s great for the community. The fact that so many of the games have been sold out proves people are behind the team and want them to stay.”

“I used to go to about 10 games a season [before becoming a Honeybee] and I don’t doubt that the fans were supportive, but it helps that they’re winning and the players come out and support the city so much,” she continued. “The games are my favorite part of being a Honeybee. The crowd just gets your adrenaline pumping and I think we have the best home games and entertainment in the NBA.”

Stacey doesn’t claim to be any type of basketball junkie, but she noted that Tyson Chandler is her favorite player.

“He’s extremely active in the community and loves the fans as much as they love him.”

Away from the Honeybees and her regular job, Stacey is pretty regular. She likes to go out in the French Quarter and shop, especially on Magazine Street, where my anonymous photographer and I met her for the photo shoot.

After literally stopping traffic, our next stop on Magazine Street was Scooter-Ria, a cool little scooter shop with ’50s memorabilia. This location prompted more stares, including a school bus full of kids.

Our last stop was Metro Three, a popular clothing store with lots of New Orleans-themed gear. The good people in the store let Stacey try on some of the shirts and show them off outside, which attracted a lot more onlookers.

All in all, not a bad day. Now, let me get your feedback on who should be next. I have my personal favorites, but I want to know who’s the people’s choice.