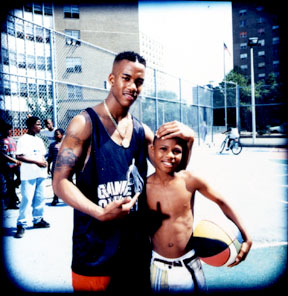 In an announcement that is absolutely nothing short of thrilling, Stephon Marbury says in today’s New York Post that he is working on a talk show. He’s apparently already taped a one-hour interview with Kobe Bryant, and a demo of the show has interviews with Chauncey Billups and Steve Francis. He’s also got an interview scheduled with Mark Cuban.

This is a scintillating idea, not only because it could be must-see TV on par with “The Christies: Committed” and “The Magic Hour,” but also because I’m pretty sure Stephon wouldn’t do your typical TV interview, where the hosts lob softballs at the guests for an hour. Hey, if Boomer Esiason and Tim McCarver can have their own talk shows, why not Starbury?

What will also be interesting will be watching to see if Steph acts like himself or if he maintains the hard-edged demeanor he presents in front of the NY media. Steph himself admitted that the way he treats the media is something of an act. But maybe even that’s changing. As Stephon said…

“I’ve had to defend myself more than the normal human being, and you have your hands up. But it’s not worth the fight anymore. I’ve won in the game of life.”