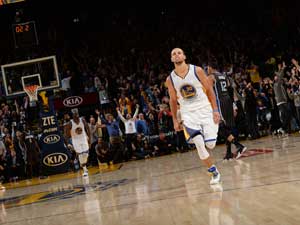 Things are looking up for Cleveland, now on a four-game winning streak. #TheLand’s big three played a big game in their visit last night to Milwaukee. Kyrie Irving (28 points and 6 assists) went 10-15 from the floor and kept the Cavs in the game after they went down double-digits. Kevin Love (27 points and 10 rebounds) opened the game with the hot hand to record 17 in the first quarter. LeBron James (26 points and 10 assists) took care of multiple clutch free throws in the final minute of the game. And still, 15-year veteran Mike Miller (6 points and 7 rebounds) made his mark in the Cavalier victory with a block on the 6-11 Giannis Antetokounmpo (14 points) and two three-pointers off the bench. For the Bucks, Ersan Ilyasova suffered an elbow to the face at the end of the first half and did not return. Brandon Knight (27 points and 8 assists) was the high scorer, and here’s a Jabari Parker (22 points and 8 rebounds) appreciation Vine:

Despite an explosive 42-point first quarter from the Boston Celtics and a 66-50 lead at halftime, the Atlanta Hawks rallied back in the second half to grab their third consecutive win. The Hawks went on a 20-5 run in the third quarter to get back in the game. Kyle Korver’s (24 points and 6 rebounds) 6-7 shooting night from downtown helped keep Atlanta alive. A Kent Bazemore (7 points) three tied up the game in the fourth, and his breakaway layup at the end of the game sealed the W for the Hawks. He also did this at the end of the first half:

Rajon Rondo (12 rebounds and 19 assists) recorded a season-high in assists for the Celtics, but the Hawks had the upper hand in the closing minutes to give Boston its fifth straight loss.

The Los Angeles Lakers are undefeated against the Eastern Conference. Yeah.

Jordan Hill (22 points and 13 rebounds) had the game-high for points, while Kobe Bryant (12 points, 13 assists, 10 turnovers) had a silent scoring night in the first half of the Lakers’ visit to Motor City on Tuesday. The NBA’s leading scorer finally found his shot in the third quarter, a period in which L.A. outscored Detroit by 15. The Pistons dropped their ninth game in a row with the loss and will look for a win in Boston tonight.

After going scoreless during the first half of the Battle of the Boroughs, Joe Johnson (22 points and 8 rebounds) ended up in double-digits to help his Brooklyn Nets get a W over their city rivals, the New York Knicks. Brook Lopez (23 points and 8 rebounds) added a game-high, and the Nets handed the Knickerbockers their fifth straight loss. The Nets nearly surrendered their double-digit fourth quarter lead when the Knicks went on a 12-5 run late in the fourth, which ended with one of Jose Calderon’s (19 points and 7 assists) five three-pointers to answer Deron William’s (19 points, 5 rebounds, 5 assists) shot from the arc seconds earlier. Johnson was perfect from the line all night, but his four in the final minute paired with a missed Coach Fisher’s timeout request were enough to call it a night in the City.

Who doesn’t love a little free basketball? Last night in Chicago, the Bulls and Mavericks went to double-overtime before Dallas came out with the win. With his team down 3 at the end of regulation, Monta Ellis (38 points) saw Kirk Hinrich (8 points) coming for him, so he went into the act of shooting from beyond the arc. Hinrich got called for the foul with 1.2 remaining on the clock, and Ellis hit all three from the line to send the game to OT. After Derrick Rose’s (18 points and 10 assists) three-point shot came up short for the win at the end of regulation, he banked in the game-tying three in OT to send the game to 2OT:

Rose couldn’t do it again at the end of the second extra period however, and the Mavs took care of things for good to earn a hard-fought road victory.

Oh, Kevin Durant. How the NBA missed you!

KD (27 points) made his debut in New Orleans last night after a foot injury sidelined him for the early weeks of the season. But despite both Durant and Russell Westbrook (21 points, 6 rebounds, 7 assists) suited up for the Thunder, the Pelicans got a win at home behind Tyreke Evans (30 points and 5 assists) and Anthony Davis (25 points, 10 rebounds, 4 assists, 6 steals, 4 blocks). That’s one heck of a stat line in the parenthesis. Here’s a visual aid:

The Pelicans had a 40-point second quarter and a 69-52 halftime lead after a 12-0 run. They were held to just 16 in the third, but never trailed in the latter half of the game. Along with the dominant efforts from Evans and Davis, Jrue Holiday (16 points and 10 assists) and Ryan Anderson (23 points and 11 rebounds) both contributed double-doubles in the victory.

So LaMarcus Aldridge is pretty good. A season-high 39 points paired with 11 boards, a couple blocks and no turnovers—just another night at the office or whatever.

The Portland Trail Blazers earned their second consecutive win with last night’s game in Denver that went down to the wire. Aldridge had a huge scoring night, and his single assist went to Robin Lopez (11 points) for what would become the game-winning layup. With the 1.3 seconds left on the clock, Danilo Gallinari (9 points) heaved a shot from beyond the arc, but it missed rim. In the loss, Ty Lawson (24 points and 13 assists) recorded his sixth straight double-double, and Wilson Chandler (18 points and 10 rebounds) got one of his own too.

Goran Dragic (34 points, 5 rebounds, 4 steals) and the Phoenix Suns pulled away in the fourth to get the win at home over the visiting Indiana Pacers. The 2014 Most Improved Player scored 22 in the first half, shot 5-6 from the arc, and hit all of his free throws to drop his season-high. His quick hands, along with teammate Eric Bledsoe’s (27 points, 7 assists, 4 steals), helped to outscore the Pacers 33-20 and hold them to just 33 percent shooting in the final quarter. The Suns had 38 fast break points, compared to the Pacers’ 15. Roy Hibbert (15 points and 10 rebounds) put up a double-double, but the Phoenix backcourt plus 15 points each from Markieff Morris and Gerald Green carried the Suns to victory.

The Toronto Raptors snapped their two-game losing streak in their trip to Sacramento yesterday. Six of nine Raptors who saw minutes were in double-figures—most notably Kyle Lowry (27 points and 13 assists), who led the game in both scoring and dishing. Lowry’s jumper with just under a minute left in the game put the Raps up 113-107. Another shot from James Johnson (19 points) and successful free throws put the game away. Terrence Ross (20 points) was on fire in the first quarter, scoring 15 of the Raptors’ 31. In the second, the hot hand shifted to Ben McLemore (21 points), who put up 12 in the quarter, including this:

Stephen Curry is like a golden child over in Oakland—can we all just take a moment, please?

With that shot from Curry (22 points and 5 assists) and the subsequent one-point W over the Orlando Magic last night, the Golden State Warriors are on a 10-game winning streak—the longest active streak in the League—and they’re also tied with Memphis for the best record.

After a 10-point halftime lead, the Warriors only scored 17 in the third, compared to the Magic’s 29, who have their own young star in Victor Oladipo (27 points and 3 steals). The close game stayed close throughout the fourth and until the final buzzer sounded, making for a thriller in front of both the Oracle crowd and fans at home.