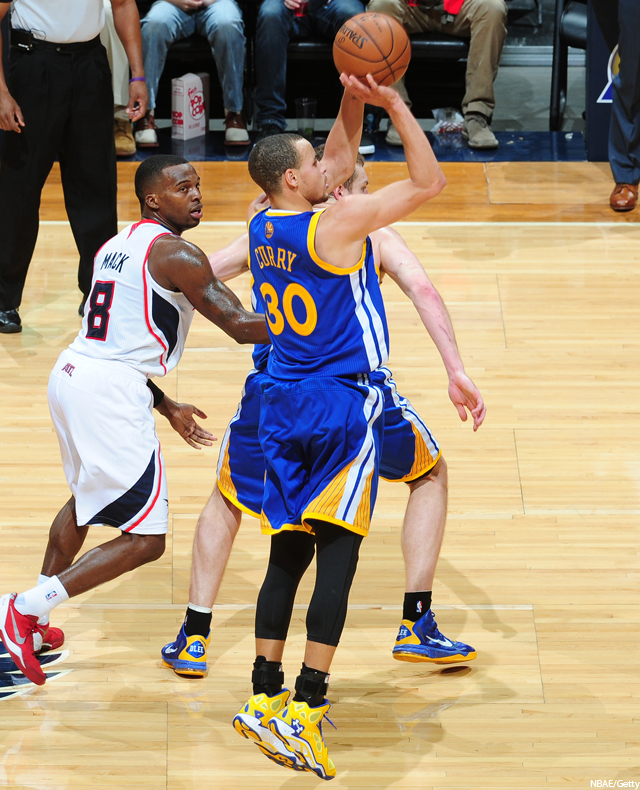 If you read this column upon occasion, you know how much I like guys who make big jams, such as Blake Griffin and LeBron and even mighty mite Nate Robinson. But I like every hoops player who does something exceedingly, blindingly well, and that means I have the hots for Steph Curry, too. The slender 6-3 Warrior guard’s thing is the jump shot, specifically the long jump shot.

I will watch any game Golden State plays, just to see Curry’s jumper fired precisely, beautifully and quicker than a lizard’s tongue. The longer the J, the better, but his 12-footers are things of beauty, too. So delicate, so freaking fast, which they must be to get launched over all defenders. And so uncannily dead-on from any range. Consider that Curry is currently shooting over 50 percent from 28 feet to halfcourt—that is, from four feet past the arc and beyond. Last season his percentage on threes was better than it was on twos.

I don’t get it, but I am overwhelmed by it. Many years ago I asked Connie Hawkins, a great leaper, if jumping ability wasn’t the greatest of innate hoops skills. He surprised me when he said that jumping surely was a gift, but that shooting ability was the rarest gift of all. He explained at length. Every elite player took thousands and thousands of practice shots, often hundreds of thousands, but only a handful became remarkable shooters. Jerry West, Oscar Robertson, Sam Jones, Rick Barry, Dave Bing, etc. Hawkins said he was in awe of the great shooters. I’d never pondered shooting that way. The old saw was that shooting was nothing but practice, wearing out the twine, abusing the barnyard bucket. Not the whole story, said the Hawk.

I don’t know how many jump shots Curry will hoist in his life; he’s only 25. But each one he takes on an NBA court these days is just fine with me.