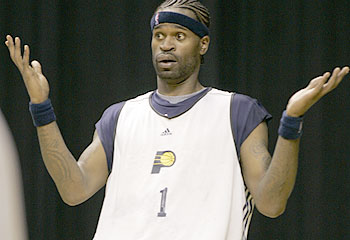 I would love to tell you about my weekend in Montreal, but I’m on the run from the cops for what transpired over there. Things got ugly. Let’s just move on…

Onto the news & notes:

-Well, that was quick: Ron-Ron and S-Jax have already gotten in trouble with the League, and the season has yet to begin! Jackson and Artest have been suspended for the first seven games of the 2007-2008 season for being bad little boys off the court.

Jackson was suspended for pleading guilty to criminal recklessness stemming from a gun-firing incident last fall when he was with the Pacers. He had to pay a $5,000 fine and ordered perform 100 hours of community service.

Artest was reprimanded for pleading no contest to infliction of injury on a spouse stemming from a domestic dispute in March in Placer County, California.

Incidentally, Artest was in Africa on a Goodwill tour when the League announced the suspension. Fantastic.

-Alonzo Mourning will be back next year. He’s entering his 15th season, and according to ‘Zo, it’ll be his final one. Joy to the world!

-Kevin Durant finished his Summer League in strong fashion: KD had 32 and 28 points respectively in his final two games of the summer, and he found his rhythm offensively. The Sonics, however, finished the summer winless. I suspect that they’ll do a little bit better once the real season begins.

-Vince Carter is getting a staggering amount of money from the Nets, and I couldn’t be happier.

-Speaking of money, the Knicks owe a sh*load of it in luxury taxes.

The payment due by July 25, according to a league memo distributed this week to all 30 teams: $45 million and change.

(Front office ineptitude has never been so costly.)