Stephen Jackson and the Police Report 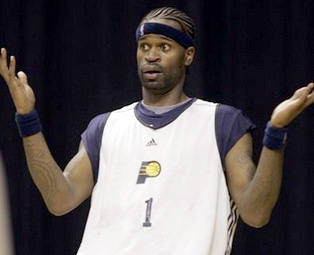 Yesterday in Indianapolis, Stephen Jackson was charged for his part in the strip club/gunshot mess from earlier in the week. With these charges, the police also released the police report for the entire incident, which the Indy Star has posted on their website here. They also have the audio of the 911 call that started the whole thing, which is worth listening to if only to hear the woman who called the report in describe Stephen Jackson as being “at least six feet tall.” You think?

1) Page One really just sets the scene. It also reminded me that had Stephen Jackson not fired a gun into the air five times, the police probably wouldn’t have been called — they were only there to respond to a call that someone was shooting a gun into the air. So without the gunshots, there’s a good chance we never even would have heard about all of this. Which makes me wonder: How much other stuff goes on that we never even hear about?

2) Jimmie Hunter was rolling with Stephen Jackson that night. (Trying to get in good with the vets?) Jamaal Tinsley was in a black SUV with someone else that hasn’t been identified.

3) Stephen Jackson “immediately” told the cops he had fired the shots and that he had a handgun with a valid Indiana license.

4) Jamaal Tinsley told the police that he had a gun in his car. He gave an officer the keys to his car and told the police that they could retrieve the gun. And wouldn’t you know it? While getting out the gun, and officer found a bag of “suspected” marijuana in the door’s pocket.

6) They also mention stopping Marquis Daniels in a white Bentley, but that’s the only time he’s mentioned.

7) One of the detectives talked to a guy who works in the club. This guy says there wasn’t any altercation inside the club, but there was a fight in the back parking lot. This dutiful employee tried to break it up but it “escalated.” He ends his appearance in the police report by saying he heard an engine, a thump and then observed a tall black male on the ground. “He then heard gunshots.”

8) Ah, Stephen Jackson himself. They read him his rights, he waived them. He agreed that nothing happened inside the club, but allows that the person who ran him over with the car might have “felt disrespected” because the Pacers crew ignored the driver while they were in the club. SJ left the club with Snap Hunter.

9) Here’s where it gets all surreal. Jackson says outside the club he was approached by “a small black male with a handicapped short arm.” This guy had one hand “in the back of his pants.” (The police don’t clarify, but I’m assuming it wasn’t his “handicapped short arm” behind him.) Weirder, SJ tells the police this little guy was yelling, “Dump!” over and over. Jackson thought this meant to shoot, and he started yelling back at the guy, and somehow this escalated until SJ got punched in the mouth by a “short stocky” guy. But isn’t everyone going to be short to Stephen Jackson?

10) Jackson says he had his handgun on him while all of this was happening, but he never mentions having gone to his car. So was he strapped the entire night?

11) Jackson and the short stocky guy fight. Then the guy hops into a car and drives it at Stephen, “which threw him over the vehicle and onto the ground.” He squeezed off four or five shots, Snap Hunter helped him up and then Snap threw the gun into SJ’s car.

12) The police interview Tinsley. His first name is spelled “Jamall” throughout the document. Not a lot of Pacers fans in the police department.

13) JT says they were in the club and someone ordered them drinks, but he doesn’t say who. Then, and this might be my favorite sentence of the year, “a black male with handcappied short arms started yelling about being a pimp and saying none of the Pacers have $500.”

14) No, I don’t know what “handcappied short arms” are either.

15) Tinsley says there was beef with the short guy and the stocky guy inside the club, because those two guys were causing problems with the dancers the Pacers had paid for. Tinsley agrees that the short guy was yelling out in the parking lot and had his hand in his waistband. He heard the gunshots but didn’t know where they came from.

16) Snap Hunter, your turn. He tells the exact same story as Jackson, and adds that he saw Jackson get hit by the car. Next!

17) Marquise Daniels was actually parked across the street from the other guys, and from across the street he saw a fight broke out and he saw Jackson get hit by the car. He was, however, “unsure if he heard any gunshots.” That’s it for Marquise Daniels — he’s never mentoined again.
18) Next comes the club’s DJ, who’s story is slightly different: He heard gunshots and came to the front door, where he “observed a handicapped black man being thrown to the ground and kicked.” He then saw Jackson get hit by the car and then heard more gunshots after that.

19) The police found a few bullets and tire marks, and the club’s video apparently shows Jackson being thrown from the car after being hit. That’s gotta hit YouTube soon.

20) After all this they take another statement from Jackson and this time they taped it. Jackson tells the same story again, this time slipping in that he did run to his car and grap his gun before the fight started. The fight started, and he now says he never got punched. He does allow that “he did kick the male with the handicapped arm when he was on the ground.” Man.

21) Jackson said he fired a gun into the air a few times to break up the fight, he got run over by the car, and then he fired a few more times.

22) I really like that Stephen was able to describe the car by one important detail: It had 26-inch wheels. He’s sure of that.

23) One day later they take statements from Daniels, Hunter, Tinsley and Tinsley’s friend. Guess who says the marijuana belongs to him. Go ahead…take a guess…right! The one guy who isn’t an NBA player. Sure is lucky for those guys. Whew!

24) Two days later, the police got a tip that the two suspects were in an apartment complex. They go over there and catch the guys, who turn out to be cousins, both with the last name Willford. The cops take ’em in.

25) The guy they call Dino, who must be the stocky one, tells his side. He says nothing happened in the club, and then once they were outside all the Pacers Crew surrounded his cousin (who must be the guy with the handicapped arm). He says he saw the Pacers crew beating up his cousin, then heard gunshots. He jumped in his car and on the way out drove over the guy who was firing the gun. Apparently he left his cousin there to get beat up.

26) His cousin, who appears to be the guy with the handicapped arm, goes next. This must be Fingers. Fingers says he was leaving the club and trying to talk to a woman when Stephen Jackson came up to him and started yelling at him and waiving a gun around. He then fired into the air. Next thing Fingers knew, a bunch of guys had him on the ground and were kicking him. He looked up and saw Dino driving away. (Thanks, cuz.) He then — and this is great — says he got up and walked over to a pay phone, where he called a cab. Just like that it was over?

27) And that’s about it for the police report. They mention going to Dino’s Mom’s house and impounding the car, and then it ends.