Stephen Jackson vs Don Nelson: Round 37 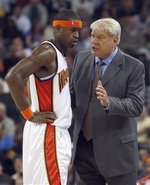 Prior to the start of the season, a disgruntled Stephen Jackson made it perfectly clear that nothing would make him happier than playing for a team other than Golden State — one of Jackson’s prefered destination choices, God knows why, was New York.

The Warriors’ inability to find the forward a new home — coupled with the Warriors’ horrific start this year — has upset the Jackson camp so much, that they’ve basically began to wage war against head coach Don Nelson.

Here’s Mark Stevens, Jackson’s agent on the offensive, via ESPN:

“No one trusts Don Nelson,” Stevens said. “When Nelson was in Milwaukee, Wayne Embry trusted him and brought him in, and he betrayed Embry. In Dallas, Mark Cuban took damn good care of him and his son [Donnie Nelson Jr.], and he betrayed Cuban. In Golden State, Chris Mullin hired him and trusted him and Nelson backstabbed him by reaching out to president Robert Rowell and blaming Mullin for everything that was going wrong with the Warriors.”

“I’m disgusted with the quality of Nelson’s coaching and with the lack of trust his players have in him,” he said. “Nelson is the winningest coach in NBA history to never have coached in the NBA Finals, let alone won a championship. Yet he keeps getting jobs despite being 69 years old…I just want him out of there now,” Stevens said. “It doesn’t matter where. At this stage, something has to be done. It can’t get any worse.”

Things are really bad in Warriors-land; Corey Maggette says the team is in chaos, and Jackson called last night’s loss to the woeful Kings “another beat-down.”

The Jackson camp may have to stick around quite a while longer. After all, what NBA front-office would want to deal with this type of headache? To say nothing of the $35 million Stephen is owed over the next four seasons.