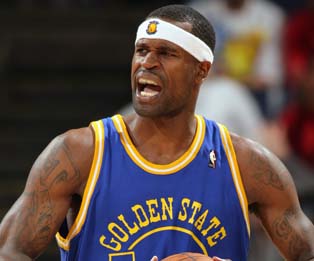 Stephen Jackson knows he’s making less money than these guys, and decided it was time to make a business move of his own. Jackson told Marcus Thompson II of the Contra Costa Times he won’t be happy without an extension.

“It’s definitely something that has to be addressed because of what I do for this team and what I’ve done since I’ve been here, bringing this team from one of the bottom teams in the league to a playoff team, to a team that won 49 games. It’s not what I want, it’s what I deserve.

“… I won’t be comfortable going into this season knowing I have to play this whole season being the fifth highest-paid and not get an extension. I would not be happy.”

Jackson still has two years and $14.89 million left on his contract.

At 30, Jackson is unlikely to receive the extension he wants and is vastly undervalued on the trade market (few teams would consider a Jack who’s looking for a big extension). Plus, in two years, Jackson may not fit well with the Warriors’ young core of Ellis, Biedrins, Brandon Wright and Anthony Randolph.

So the question remains: Will we see a ‘bad Jack’ next season or Jackson the Professional, who’s out to prove he’s worthy of a big extension?